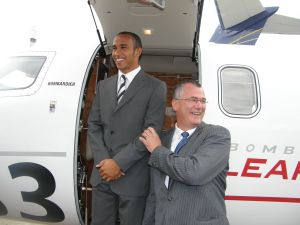 In spite of the gloom the annual EBACE (European Business Aviation Convention and Exhibition) opens today (Monday 11 May) in Geneva.  Star of the event, or at least the most interesting, is the cabin mock-up of the all composite Bombardier Learjet 85, a stand up headroom, eight-seat passenger jet – capable of a range up to 3,000nm.  Not due to enter service until 2013, the price point is attractive for operators at USD17m.  Learjet’s ambassador is world motor racing champion Lewis Hamilton.

The show itself occupies halls 6 and 7 of the Palexpo Centre, with no overspill into hall 5.  Bookings are 10% down from the 440 of 2008 but you will never know from looking at the busy ramp at the adjoining Geneva International Airport, home for a few days to around 60 aircraft, many of them for sale.  EBACE is without doubt the place where interested customers – from Europe, the US, Middle East – shop for aircraft and it is a buyer’s market out there now.

In terms of visitors last year some 13,692 were registered.  Organisers will keep an anxious eye on the numbers.  The excellent exhibitor turnout can be explained by the fact that most bookings were made many months ago, often at the time of the 2008 show.  Whether this can be repeated remains to be seen.

Some 40 years ago the British aerospace magazine Flight International ran an executive aviation show at Cranfield (England).  One of the stars was the de Havilland 125.  It is still around in much updated form, as the Hawker 800.  But you won’t see the likes of the Javelin Personal Jet or the Grob Spn – even though there are plans afoot to restart that light jet programme, which would have been the industry’s first all carbon fibre business jet.  Also missing will be the Cessna Columbus mock-up, Cessna having taken a recent decision to postpone its development.

It is the ramp that will inevitably be a major talking point.  And Embraer especially is going to have a lot to show off this year.  Its Lineage 1000 is making its debut, a derivative of the popular Embraer 190.  Yours for USD42.95m.  And, the smallest members of its family – the entry level Phenom 100 and the as yet to be certificated 300.  Also, making a debut appearance is the BAE Systems Avro Business Jet, a conversion of an RJ70.

The business aircraft market has been hit hard by the economic downturn, not helped by the leaders of the three largest US motor manufacturers turning up in Washington in their large private jets and pleading poverty!  They failed to explain what an important time machine these aircraft are to those businesses – as a result, damning headlines in the mainstream press about the ‘company jet’ which prompted NBAA/EBAA to launch campaigns of their own.

The airframe companies are sending out mixed messages prior to the show.  Cessna is cutting back from the 535 Citations it expected to deliver in 2009, to 375, with even less anticipated for next year.  Bombardier says it is reducing production by 25% and slashing 4,000 jobs.  Gulfstream annual numbers for its large cabin aircraft have contracted from 94 to 73, and it is also reducing production of the G150/G200 series, partly produced in Israel.

Honda continues with its slowly coming together HondaJet project, but you get the feeling has been around for ever.  It would be strange if it finished up the way of its Formula 1 racing car, rebadged and then successful, with another, Brit Jenson Button, at the helm.  Button has promoted the HondaJet!

Whilst its order book is down, in fact into negative figures, Dassault says that it will hand over somewhere between 80 and 90 aircraft this year, an improvement on the 72 from 2008.

This was supposed to be the year that the Very Light Jets (VLJ) or entry level jets as they have now been rebadged – began to make a real impact in Europe.  With the bankruptcy of Eclipse in March and the standstill of the USA’s Adam Aircraft, potential operators and their backers are scrutinising this marketplace.  Yes, there is business for jet powered air taxis – but for how many?  Clearly not the large number forecast.

Right now, the new Cessna Mustang is ahead of the Embraer Phenom 100 this side of the water with a number of aircraft delivered, but for how long?  By the end of the year there should be ten of the six passenger Brazilian mini-jets operational in Europe.

At the lower end of the market sales have been particularly hit.  Piper, the second oldest of them all (Cessna can trace its history back to 1911), has confirmed that deliveries in 2009 will hardly make 110, as against 268 in 2008.  It does seem that the days of new piston-engined business aircraft are limited, although the tens of thousands of ‘twins’ in the United States will be with us for many years.

Next week Alison Chambers will be reviewing EBACE.  It will be interesting to appreciate her views on what the future holds, not only for the attendees, but for the show itself, currently an annual event.  It should make for good reading.