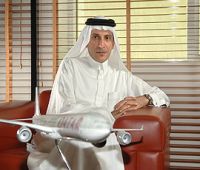 QATAR AIRWAYS undeterred by the current economic climate has confirmed that it is pressing ahead with an expansion plan that includes new aircraft, routes, infrastructure and continued environmental efforts to reduce carbon emissions.  Six new routes planned across India, Australia and Europe over the next ten months with new aircraft joining the fleet at an average rate of one a month.  The airline’s fleet size of 68 aircraft will increase to more than 110 aircraft by 2013 and destinations served are set to rise from 84 to over 120 in the next five years. www.qatarairways.com