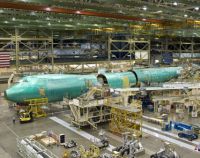 Boeing has finally landed a third customer for the 747 Intercontinental in passenger form.  Air China announced at Asian Aerospace a contract for five aircraft, joining Lufthansa and Korean Air as lead customers.  Rumours were also spreading that 20 March is the date for the maiden flight of a plane that sits neatly in between the Boeing 777 Twin and the larger Airbus A380.

In what was considered a break with tradition China’s Hainan Airline Group (HNA) called a press briefing itself to announce MoUs for 48 aircraft – 32 Boeing 787s (including two VIP versions) for Hong Kong Airlines and six 777F cargo aircraft.

On the business aircraft front rivals Gulfstream and Dassault shared the limelight with an order for five business jets each – Dassault for the new 7X and Gulfstream for new G450/550s. www.asianaerospace.com