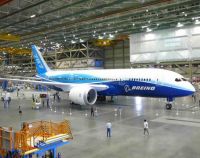 Boeing is on track to deliver the long-delayed 787 Dreamliner to its first customer, ANA of Japan, in the third quarter of 2011 according to Scott Fancher, who now heads the programme.

Speaking to reporters at Boeing's San Antonio, Texas site, last Friday he also said that no cancellations could be attributed to delays that have put the aircraft nearly three years behind schedule.

Orders for the 787 are robust and still a record for commitments for a commercial jetliner before certification.  The company has 843 booked, well ahead of original expectations.

But the company sees periodic cancellations, including the loss of eight in the most recent week from an unidentified customer.  "Most of the cancellations we've seen have been due to the specific economic conditions or business conditions of our customers," Fancher said.

Air Canada has become the latest carrier to publicly announce a delayed delivery date with its first 787 now not due until late 2013 or early 2014. www.boeing.com/commercial