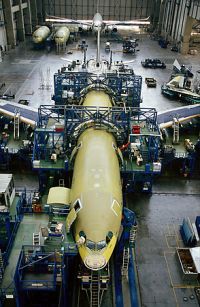 AIRBUS has confirmed that due to the current economic and aviation crisis it is slowing down production of both the A380 and A320 family.  The Toulouse-centred company says that customers have been requesting deferrals.  Current plans now call for 14 completions of the double-decker aircraft in 2009, as against the projected 18, but back to more than 20 aircraft in 2010.  In February Airbus announced its intention to reduce the A320 series family production rate from 36 to 34 aircraft per month from October 2009.  Production of the A330/340 family runs currently at a rate of 8.5 aircraft per month.  Airbus was able to confirm its plan to deliver in 2009 about 483 aircraft, the same number of aircraft as in the record year of 2008. www.airbus.com