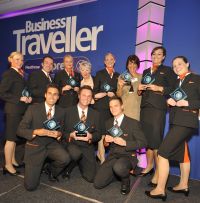 THE BUSINESS TRAVELLER AWARDS 2010 were dominated by Singapore Airlines picking up Airline of the Year and a plethora of lesser prizes.  British Airways, represented by CEO Willie Walsh, was only left with wins for Best Short Haul Carrier and Best Frequent Flyer Programme.  Domiciled for a decade or so at the London Hilton Park Lane this year’s luncheon was in the ballroom of Kensington’s Royal Garden Hotel, hosted by the publishers of the magazine, Panacea Publishing International, and presented by guest celebrities journalist Kate Adie OBE and award-winning stand-up comedienne Jenny Éclair with sponsorship by Heathrow Express, Panasonic and Aeromobile.  The Best Airport in the World was once again awarded to Singapore’s Changi Airport, which has yet to be beaten in this category.  Amsterdam’s Schiphol Airport won Best Airport in Europe and Heathrow was awarded Best Airport for Tax-Free Shopping for the second year running. www.businesstraveller.com/awards2010