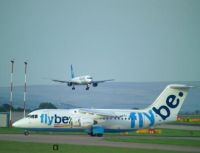 BASED AT EXETER AIRPORT, Flybe, which aspires to a Stock Exchange listing and is 15% owned by British Airways, has reported pre-tax profits of £7.5m (US$11.7m) in the year to March – significantly up on the same figure last year.  But, stripping out exceptional, the underlying income fell from £12.8m to £6.8m on the back of passenger numbers that were largely unchanged.  The airline says that the Icelandic volcanic ash cloud cost £12 m in lost revenue.  Flybe has a franchise arrangement with Loganair who operate mainly Scottish regional services.  It also recently signed a code-sharing agreement with Air France allowing it to move into continental Europe.  The airline is in discussions with Finnair regarding future operations out of Helsinki.  Flybe flew 7.2m passengers in the financial year, slightly down on the 7.3m for the previous period. www.flybe.com