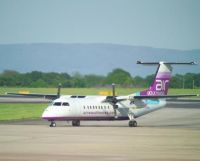 EASTERN AIRLINES is to become the new owner of Air Southwest (ASW), the Plymouth-based regional carrier.  As forecast in last week’s AERBT, Eastern Airways, headquartered at Humberside Airport, will complete a take-over deal in October.  Air Southwest will continue to fly under its existing brand.  Current owner Sutton Harbour Group announced in May that it intended to sell Air Southwest so that it could concentrate resources on its core business of property regeneration and development.  It will retain its lease on Plymouth City Airport, and says it will continue to work with the airport’s freeholder, Plymouth City Council, on this strategically important asset for the city.  The two airlines are very compatible in terms of route structures and having completely different fleets (ASW 50-seat Dash 8 versus Eastern’s core 29-seat British Aerospace Jetstream 41). www.airsouthwest.com www.easternairways.com