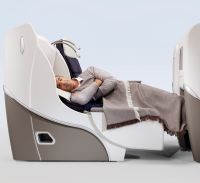 BUSINESS CLASS passengers on Air France can expect to see a much improved cabin from the start of next year as the airline introduces a fixed shell seat built by BE Aerospace.  It is just 12 months since the airline announced a major upgrade of its Economy and Premium Economy products.  By summer 2011 over 20 aircraft (Airbus A330, Boeing 777, Airbus A380) will be equipped with the fleet installation completed by 2013.  Amongst the many improvements are much simpler seat controls, a 15” wide screen in a 16:9 format and a complete re-think regarding catering.  Air France has also announced new routes from Paris to Lima and Orlando in June next year. www.airfrance.com