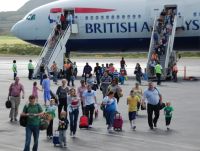 BRITISH AIRWAYS had a narrow escape from what would have been a potential disaster at St Kitts in the Caribbean on 26 September last year, according to a report published by the UK Air Accident Investigation Board (AAIB).  A Boeing 777 took off from the wrong runway after the flight deck crew mistook the holding point/intersection, reducing the take-off by 695m to just 1220m, little more than London City Airport.  BA local ground staff on board, two of just 89 passengers, did notice the problem but the aircraft was already on the roll by then.  The aircraft took off safely.  Blame has been contributed to both the operating crew and the airport authority, a trainee handling the aircraft movement. www.aaib.gov.uk