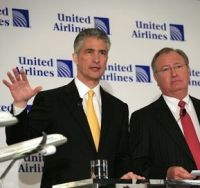 US JUSTICE DEPARTMENT officials have approved the proposed merger between Continental Airlines and United Airlines, creating the world’s largest air carrier.  The company will be headquartered at United's Chicago offices.  Continental boss Jeff Smisek will become Chief Executive while United's Glenn Tilton takes on a non-executive Chairman’s role.  A provision of the merger is that both airlines will have to relinquish slots at Newark New York to budget carrier Southwest Airlines.  Both airlines are members of Star Alliance and are already working towards effecting the merger.  In the UK, Continental is currently based at Horley near Gatwick, while United’s headquarters are on the Southern Perimeter Road at Heathrow.  Continental’s operational focus is New York whilst United offers both Chicago and Los Angeles. www.continental.com www.united.com