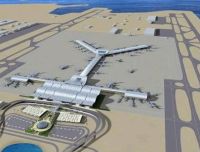 QATAR’S new international airport, sited just under three miles east of the existing operation continues to make progress, albeit at a slower rate than first envisaged.  Originally scheduled to be open during 2009, but like the A380, around which it was planned, somewhat behind schedule.  A date towards the end of 2011 is now being suggested, although even this is not firm.  During Farnborough a statement was issued noting that the two runways, 4850m and 4250m, were almost complete, as was the dredging work with 60% of the land required being reclaimed.  Facilities include a VIP terminal, 100-room hotel, free trade zone, Qatar Airways headquarters and general aviation terminal and new hangar. www.ndiaproject.com/main.html