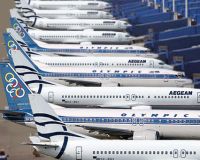 AEGEAN AIRLINES proposed acquisition of the regenerated Olympic Airlines could be delayed according to a report in the London Financial Times.  Officials at the European Commission are said to have told the newspaper that their initial investigation had shown that the proposed merger could raise serious competition concerns, with the combined business having “very high, if not monopolistic market shares on all domestic routes, and on a number of international routes where both parties operate.”  The Commission seems to think that it would have an impact on ground handling services at a number of Greek airports and tendering for “public service obligation” routes, which are subsidised monopolies, although bids are open to any EU carrier. www.aegeanair.com www.olympicair.com