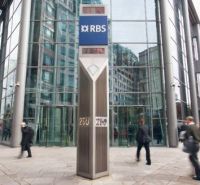 RBS AVIATION CAPITAL, one of the world's largest leasing companies, has ordered 95 aircraft worth £5bn.  It currently controls a fleet of around 210 planes and is also an active aircraft trader.  It is part of the Royal Bank of Scotland, itself 83% owned by the British taxpayer.  Both Airbus and Boeing confirmed during the Farnborough Air Show that they had taken commitments from the Dublin-based company for 52 Airbus A320s and 43 Boeing 737s respectively with delivery due between now and 2015.  It does seem that RBS had signed the deals some time previously but for its own reasons kept the arrangement quiet.  Going the rounds at Farnborough was a story that Business Secretary Vince Cable was none too pleased that RBS was lending an Indonesian airline money to buy aircraft whilst restricting funds to UK enterprises.  Last week RBS reported an operating profit of £1.6bn compared with the previous loss of £3.4bn.  www.rbs.com