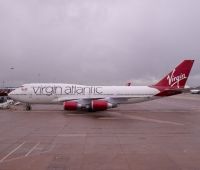 VIRGIN ATLANTIC has unveiled the first changes to its livery and brand identity since 2005.  It will be applied to all 38 aircraft in its fleet, as well as signage, communications and advertising.  Passengers looking out the windows will also be in no doubt who they are flying with, as winglets will now carry the Virgin script on the inner side.  The airline says that the flying lady sported on the front of the carrier's aircraft will also receive a "subtle cosmetic makeover and enhanced detailing," and will now carry a large Union Jack.  The new design has already been applied to one of the carrier's Manchester-based Boeing 747 aircraft, and will be rolled out across the existing fleet.  The carrier’s future A330, A380 and Boeing 787 aircraft will also feature the design. Whilst reporting the worse loss in it's history, £132m in the year to March 2010 (£68.4 profit for the previous 12 month) Virgin says that its load factor for the last quarter was an excellent 82% with Upper Class numbers up by 15%.  www.virgin-atlantic.com