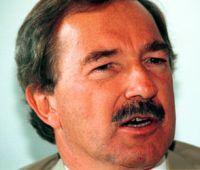 STEVEN UDVAR HAZY may not be familiar to regular business travellers but during the Farnborough Air Show his new Air Lease Corporation (ALC) signed up for 136 aircraft including 31 Airbus A320s, 20 Airbus A321s, 54 Boeing 737-800s and 15 Embraer E-190s for delivery beginning in 2012.  ALC will be a powerful player in the years to come in aircraft trading and purchase with the pendulum of airline transactions swinging back towards leasing rather than direct sales and finance deals.  Born in Hungary, he and his family escaped the then Soviet dominated state in 1958 and today is living in the United States and reckoned to be around 300 in the list of the world’s wealthiest persons.  He is the former Chairman and CEO of International Lease Finance Corporation (ILFC), one of the two largest aircraft lessors on the planet (the other being the GECAS arm of General Electric).  ILFC itself is owned by AIG, still under a shadow following the 2008 financial crisis. www.airleasecorp.com