ON TOUR: Around the World with Shangri-La 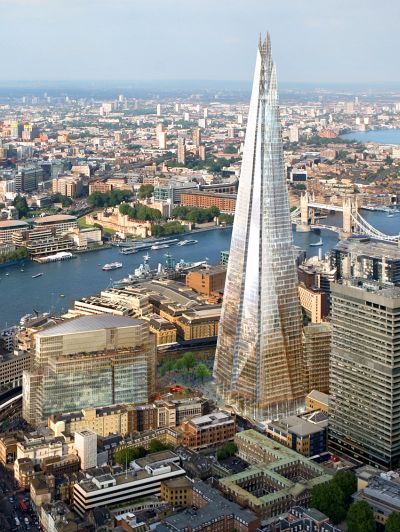 What does the term Shangri-La mean to the average business traveller?  It probably equates to a top grade 5-star hotel group mostly to be found in the Far East with a reputation for impeccable service and cuisine of the highest quality.  In times to come it might also signify The Shard, London Bridge, when completed in 2013 the tallest building in the European Union.  The Shard will also be the home of the London Shangri-La.

In a business where the title usually stems from the original founder (Marriott and Kempinski come to mind), or by virtue of what is offered, typically Holiday Inn, Travel Lodge and Premier Inn, the name seems out of kilter.

Shangri-La is a fictional place described in the original 1933 novel Lost Horizon by British author James Hilton.  It is a sort of earthly paradise, a mythical Himalayan utopia — a permanently happy land, isolated from the outside world. 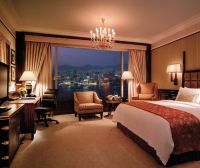 For US President Franklin Delano Roosevelt, Hilton’s book held a particular resonance and Camp David, now the weekend retreat for the American leader, was originally called Shangri-La.  It was in his honour that the US Navy commissioned one of its fleet carriers, USS Shangri-La, in 1944.

Fast forward to 1970 and a new hotel group is about to be born.  The choice of the right name was vital with aspirations to appeal to both a Far East and Western business market.  The title Shangri-La epitomised the original investor’s dream, as near as you can come to an earthly (hotel) paradise.

Without the hotels Shangri-La may have been forgotten.  The original founder Robert Kouk (still the Chairman and now 86) insisted that a copy of Paradise Lost be put in every room.  That is still the case.

In 1971 the first property opened in Singapore.  Today it still has 15 acres of landscaped gardens, but now consists of 750 guest rooms, 127 serviced apartments and 55 luxurious condominium units.  Its is the group’s flagship hotel, one of 66 throughout Asia Pacific, North America and the Middle East, representing a rooms’ inventory of over 30,000.  In addition, new properties are under development in Austria, Canada, mainland China, France, India, Macau, Philippines, Qatar, Seychelles, Turkey and The Shard in the United Kingdom.

Your Editor in Chief recently took a trip which encompassed Oman, Thailand and then by cruise liner to Singapore, Vietnam, Hong Kong, Taipei, Okinawa, and finally Shanghai and Beijing, both in China.  He booked in at certain Shangri-La’s along the route, until it became a passion.  Readers might like to avoid the mistake he made.  You should know that the prestige Shangri-La in Beijing is not called Shangri-La at all, but China World.  Make sure you give the taxi driver the right address (in Mandarin). 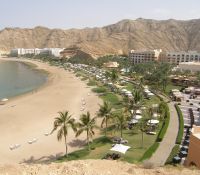 Oman is not part of the UAE but in its own quiet way is just as successful.  If you have business in the capital Muscat, or thinking of somewhere different for a quiet break, or not that keen on a 15-hour fight to the Far East and need a rest halfway, try the Shangri-La's Barr Al Jissah Resort and Spa, 30 minutes from the international airport and 15 minutes from Muscat itself.

Nestling in the bay of Al Jissah it is in a dramatic desert setting of rugged mountains and inviting beaches.  Essentially the resort is three adjoining hotels.

Fit for a king (and some have stayed) Al Husn – The Castle is 5-star luxury.  You sign in within your suite.  Not for guests staying here the misery of standing in a queue whilst a harassed receptionist takes details.  Al Bandar – The Town is mid-range deluxe.  Al Waha – The Oasis is a family hotel but still in layout and room quality outstanding.

All the facilities are open to everyone and you can eat in one of seven restaurants.  Essentially it is a small self-contained resort with the empathises on water sports including fine sandy beaches, a large swimming complex, tennis courts, an open air amphitheatre, Omani heritage village and the inevitable souk. 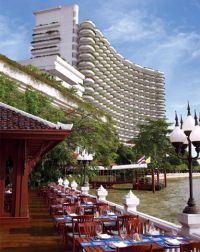 Bangkok’s Shangri-La sits on the bank of the Chao Phraya River, with its own jetty and ferry, and has not been involved in the troubles that have befallen the city in recent times.  It is on the main road from the airport and adjoins the Saphan Taskin Skytrain station, the city’s elevated metro system and with it access to most of Bangkok.  Readers should note that whilst the line to the new international airport is structurally complete disputes with the contractor mean that at the time of writing is was still not open.

The hotel is located in the central district of Silom, is within easy walking distance of a whole variety of shopping areas.  It also has a busy night life.  Taxis are no problems and cheap.  The outside swimming pool and adjoining restaurant area is by the river and the hotel has two floodlit tennis courts and also a pair of squash courts.  Swimming.  There are 800 rooms in two distinctive wings, Thai, Italian, Cantonese and International restaurants. The Grand Ballroom can hold 1,600 theatre-style. 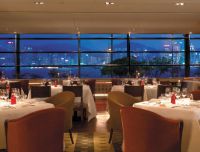 Hong Kong has two Shangri-La’s, one towering above the Pacific Place shopping complex on the Island and dating from 1991, and the other on the harbour front in Kowloon and ten years older.  They are both very much Shangri-La’s but very different from each other.

The Island property is 56 stories high, has 565 guest rooms and offers amazing views from the rooftop Restaurant Petrus (French cuisine).  It also has the world's largest Chinese silk painting, 'The Great Motherland of China' which can be found in the hotel Atrium between the 41st and 56th floors.  There is an outdoor pool and on a more mundane note the superb accommodation offers electrically controlled curtains from the bed.  No need to jump up in the morning.  Just buttons to press for natural light and the TV.

On the bustling Chinese side of Hong Kong the property is even larger with 688 rooms located over seven floors.  It is ideal for connection to mainland China and if it is superb Italian food that you enjoy Angelini’s Restaurant offers an amazing view of the Island skyline with timing important in order to catch the nightly laser show.  On the top floor is the executive Horizon Club, ideal for a quiet breakfast.  Here the swimming pool is indoors. 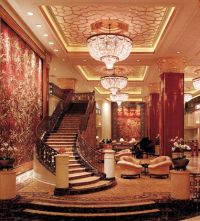 Beijing’s flagship Shangri-La is called China World.  There are three Shangri-La’s in Beijing plus two 4-star Traders.  The China World property dates from 1990 and has a fine location on Jiangoumenwai Avenue which leads directly to Tiananmen Square and the Forbidden City.  There is a Metro station opposite the hotel and with it easy (but crowded) access to the Bird’s Nest Stadium and the Olympic Park.  The train also goes to the new international airport which still goes under the old IATA code of PEK.  Taxis are very cheap and Beijing is no longer a city dominated by bicycles.  Watch out for the driver who has just bought his first car, and is now learning to drive!

If you choose to arrive on Sunday afternoon do not be surprised to find a full orchestra welcoming you.  The Chinese do everything in style and tea with music is part of the tradition.  Weekdays there is a soloist at the grand piano, of the highest concert standard.  And with labour cheap you will not have to press the button for the elevator.  A lift door-person is always available.

China World is arguably the flagship hotel for Shangri-La for the whole of China.  Nothing has been spared in terms of luxury and the whole 716-room property is sheer class.  Everyone is treated the same and it is very easy to wander past a famous politician or star of stage and screen, who just like yourself, is marvelling at the classical drapes, chandeliers and artwork, which abound.  For dining there is a choice of Cantonese, Japanese and Aria, modern European with a jazz band for later on in the evening. 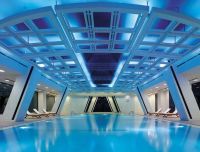 The magnificent Fitness Centre at China World Hotel features a heated indoor swimming pool and a state-of-the-art gymnasium equipped with spacious exercise studios and the latest cardio-fitness machines.  The squash and indoor tennis courts are claimed to be some of the finest in Beijing, and there are steam rooms and Jacuzzis.  Guests may indulge in traditional Chinese massage or try out the city's only Oxygen Room.

And for the future new Shangri-La’s are planned for Paris December 2010, Vienna 2011, Istanbul and Toronto 2012, and in 2013 London and Moscow.  There are 37 Shangri-La’s in the development stage in mainland China.

THE SHARD ‘The Tower of Glass’, in London is likely to be the most outstanding of all Shangri-La’s and due to open in the early part of 2013, perhaps a hotel version of James Hilton’s Utopia.  Whilst of only 200 sumptuous rooms, the EU’s tallest building, it will dominate the London Bridge area on the south side of the Thames, overlooking City Hall, home of the Mayor of London, and HMS Belfast.  On the other side of the river is the Tower of London and The Gherkin.  It will include shops, offices, restaurants, residential accommodations and public viewing galleries offering sweeping views of the capital.  At 72 floors it will be seen from everywhere.

The Shard Shangri-La will occupy floors 34 to 52 of the building accessed by a dedicated entrance at street level.  Details have yet to be released but we do know it will be Asian themed and will include a Chi Spa, Shangri-La’s trademark treatment and massage concept.  It is an outstanding prospect. 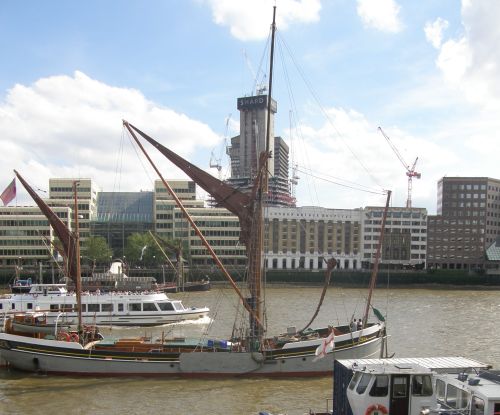