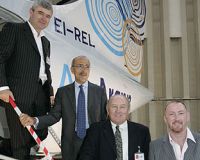 SHANNON from Manchester has been introduced by Aer Arann as part of its franchise deal with Aer Lingus.  Galway, Kerry and Waterford are already served from England’s major city in the Northwest whilst the Irish national airline offers three services a day to Dublin.  As part of the new arrangements Cork joins the franchise giving the city a double daily service.  What has impressed everyone is the speed at which the undertaking has arrived.  The first Aer Arann and Aer Lingus franchise flight from Manchester to Shannon took to the skies just over four weeks after the new flights were announced. www.aerarann.com