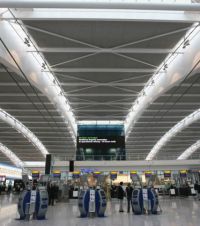 BRITISH AIRWAYS has welcomed its 50 millionth customer through Heathrow Terminal 5 in a little over two years since it opened amid controversy and chaos in March 2008.  As measured by industry standards, British Airways has improved its punctuality at Heathrow from an average of around 50% on time departures each month when it was split located in Terminal 1 and 4, to about 80% currently.  Many days the airline can achieve 90% of on time departures at Terminal 5.  In addition, thanks to Terminal 5, British Airways says it now has the best baggage performance of any major European hub-based carrier.  Overall levels of punctuality and baggage operations will improve even further when a new £300m third part of the terminal campus, known as T5C, opens for customers in early summer 2011. www.ba.com