Airbus did receive subsidies according to WTO 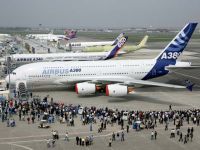 THE WORLD TRADE ORGANISATION (WTO) in a long (1,050 page) and damning report on the dispute between Boeing and Airbus over EU civil aircraft subsidies seems to have come down on the side of the US company.  Even its conclusions ran to four pages.  What makes it even more complicated is that the interim report on the countersuit against Boeing is now expected on 16 July.  That is more than likely to find the Chicago-headquartered company guilty of illegal practices too, although American officials insist the EU assistance is much more serious than what is at stake with Boeing.  How this affects future sales of the A380 and also the rapidly coming together A350 remains to be seen.  The report is presumably being scrutinised by Brazilian, Canadian, Chinese, Indian, Japanese and Russian governments all of whom are supporting commercial aircraft projects.  Airbus is bidding against Boeing to win a US$50bn contract to supply tankers to the US Air Force based on the A330 which WTO says was illegally subsidised. www.wto.org