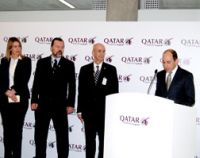 QATAR AIRWAYS has launched scheduled daily flights to Brazil and Argentina from Doha for the first time.  The service to Sao Paulo, and onwards to Buenos Aires, is flown by a Boeing 777-200LR in a two-class configuration, 42 up front and 216 passengers in Economy.  Sao Paulo is Brazil’s largest city and Buenos Aires the Argentinean capital.  The two new routes complete a five-month expansion programme so far this year which has seen the airline introduce flights to Ankara, Barcelona, Bengaluru (Bangalore), Copenhagen and Tokyo.  During a four-month period starting in October 2010, Qatar Airways will expand its international route network further with six new destinations, operating scheduled flights from Doha to Brussels, Bucharest, Budapest, Hanoi, Nice and Phuket. www.qatarairways.com