Paris to London A380 service 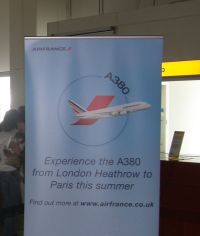 AIR FRANCE has introduced the Airbus A380 on weekend services between Charles de Gaulle and Heathrow.  Announced less than one month ago the flights have attracted unprecedented interest according to UK and Ireland General Manager Henri Hourcade.  “During the first five days we took over 6,000 bookings for the £80 fully inclusive promotional return fare, which is terrific going.  We are not even up and running with our marketing campaign yet!”  M Hourcade said that May from the UK had been very good with the load factor up fours points from last year.  “This may be due to BA’s problems,” he said.  The inaugural flight last Saturday was full in Economy, with a few seats available in Business Class.  The majority of passengers seemed to have specially booked to be on the A380.  The single return flight from Paris operates Friday to Monday until the beginning of September. www.airfrance.com