Emirates gets the honours 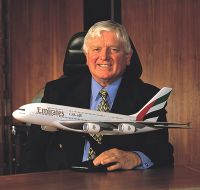 SIR MAURICE FLANAGAN is the new title of the creator of the Emirates Group, and currently the Executive Vice-Chairman, announced in the Queen’s birthday honours list.  Now 82 and, after many years in the Gulf, still very much a Lancastrian, he might have played football for Blackburn Rovers (whom he still supports), but a knee injury put paid to a possible career.  Maurice spent 25 years with BOAC and British Airways before he was asked by the Dubai government in1985 to create a locally based airline.  Today Emirates operates to 108 destinations in 60 countries from its hub in Dubai, and currently has a fleet of 140 aircraft, a number which is expected to double over the next decade. www.emirates.com