The New Audi A8

Luxury with technology and driver appeal 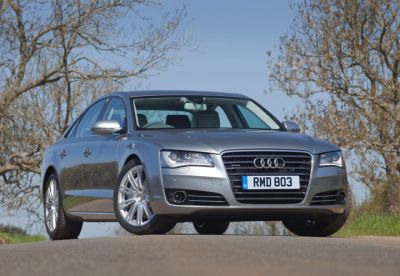 On the one hand there are drivers’ cars and on the other hand there are luxury cars.  Rarely do these two requirements come together successfully in a single product, and even less often are they combined with fuel efficiency and lower environmental impact.  Now there is the new Audi A8.

Audi’s technology flagship luxury saloon comes to the UK with highly developed 4.2-litre V8 engines in both petrol and diesel versions.  Advanced use of aluminium in the ‘Audi Space Frame’ body construction combines light-weight with enhanced rigidity.  Attached to this structure is a highly developed aluminium adaptive air suspension system that can be electronically adapted by the driver for comfort, sharp handling or any balance between the two.

Fuel and CO2 savings are enhanced by Audi’s recuperation technology that recycles some of the kinetic energy produced as heat under braking.  This is stored as electrical energy and re-used to supplement engine power when acceleration is needed.  Power from the engine goes through a new 8-speed tiptronic gearbox which can be used in fully automatic mode, or in manual, to suit the driver’s mood.  All transmissions for 4.2-litre engines are Quattro 4-wheel drive and, available as standard in the TDI and as an option in the FSI petrol versions, is the active sport differential.  This allows asymmetric distribution of power to the wheels.  Under different driving conditions the balance of torque that is distributed to the front and rear wheels is varied to counter traction losses.  When cornering, particularly under acceleration, more power is sent to the outer rear wheel which has the greater grip due to weight distribution.  This literally pushes the car through the corner to maintain speed with safety.

The Audi drive-select adaptive dynamics system enables the driver to set up the car’s handling to suit personal preferences.  The comfort setting is for long-distance cruising with light controls, smooth throttle response and relaxed engine revolutions.  Switching to dynamic mode brings extra weight to the steering, sharper throttle response and later gear changes that allow the engine to spin more enthusiastically.  Auto mode is a compromise between these two settings and will probably be used most of the time.  A fourth setting allows the driver to adjust many aspects of the car’s dynamics to suit individual driving taste.

The Audi A8 is in a premium sector where buyers expect a very high level of quality and luxurious appointments.  SE models have Valcona leather seating.  Front seats have variable heating and electrically controlled lumbar support and full adjustment with memory.  The media centre has music storage with programmable selection and external sources such as MP3 and USB can be connected. A satellite navigation system is provided and a centrally placed data screen displays mapping, trip and advanced route planning information.  Bluetooth interface for mobile telephones is also standard.  A clever feature is the touch-sensitive input pad.  Whilst negotiating the many menus in the system, an initial letter can be written on the pad with one finger. If, for instance, the navigation system is being used, place names with that initial letter will be displayed. The selection can then be refined.  This feature is also useful when choosing music.

The A8’s seats are very comfortable and both front and rear occupants have plenty of leg and head room.  When no more than two passengers occupy the rear seats, a centre console can be folded down to provide an armrest, convenient support for drinks and small items and also a control panel for individual selection of heating.  There is also a large selection of audio-visual equipment available on the options list.  Other options include electronically programmed massaging built into the seat backs.

Whilst the SE versions of the Audi A8 are very well equipped, there is of course a very long list of options starting with the SE Executive versions which add extra safety and styling enhancements.  Beyond that the list of available options is loo large to list here. Suffice it to say that it is very comprehensive indeed.

The A8 has a style all of its own yet is obviously an Audi.  The constrained shape is conservative and does not shout about its luxury and abilities.  The frontal treatment of the headlights and grill are perhaps the only slightly aggressive features of an otherwise understated presence.  This is not a ‘show-off’ car and those who like to do so will no doubt look elsewhere.  Some may say that the Audi lacks styling flare and is a bit boring; others will welcome its subtle expression of automotive taste.  Audi’s sales success indicates that this category of car ownership is a large and ever growing one.

The driver can adjust the seat and steering wheel using motorised controls to achieve a comfortable seating position.  The array of buttons, instruments and screens appear a little daunting at first glance, but familiarity is soon achieved due to the logical thinking that has gone into the layout.  The drive selector falls easily to hand and a press on the brake pedal and a push of the start button brings the engine to life.  The only evidence of tickover is a movement of the tacho needle as there is little sound.  This is particularly evident with the diesel engine which seems to be even more refined than the petrol version.

Once on the move the Audi picks up speed very rapidly, depending on road conditions, and proceeds in a quiet and refined manner.  Motorway cruising is effortless with plenty of power to pick up speed where necessary.  In both Auto and Comfort mode the gear changes are imperceptible.  The steering is light yet has plenty of feel and the A8 corners with absolute stability.  If the driver feels like a more involving experience the Dynamic mode can be selected.  This brings sharper throttle response, firmer suspension, more weighted steering and later gear changes.  The latter is more apparent in the petrol FSI version of the A8.  With the throttle on the floor the engine spins up to 7000rpm before changing to the next gear and acceleration is, shall we say, brisk.  There is also a satisfying sound from the exhaust during these changes, emphasising the sporting character of the marque.

With the A8 owners choose a relaxed or sporting drive, or anything in between, and can be assured the car will meet their requirements. The Audi A8 is a car for crossing continents in comfort one day and for plying city streets in equal comfort the next day.  For those with exacting requirements that are looking for a luxury executive car, the Audi A8 should undoubtedly be on the short list of cars to consider.

CLONING: Over 1,300 cloned vehicles have been recovered in the UK since 2006.  Car.Enquiry.co.uk which worked in co-operation with the AA in advising potential car buyers also reports that 100,000 DVLA documents, stolen in 2008 have not been recovered.

MAZDA: The Mazda 6 2.2 turbo diesel estate model has been voted the Best Estate Car 2010 by Fleet world magazine.  The car is reported to have won by combining driver appeal with lifestyle, versatility and workhorse practicality.  Mazda has also reported that it has appointed 20 additional dealers in the past year, bringing the UK network to its largest since 1969.

SEAT: The Spanish SEAT car maker has continued to develop its range of Ecomotive low running cost models, first seen on the Ibiza with versions of the Leon hatch back and the Altea compact MPV.

Replacing the 1.9-litre turbo diesel engine, the smaller capacity power unit display high levels of refinement (as experienced during pre-launch testing), exceptionally low noise levels, impressive flexibility and with a power output (for both) of 105 bhp more than passable performance.

A serious gain are the very low exhaust emissions, the Leon returning 99g/km, the larger Altea 119 g/km allowing both to qualify for low road tax, currently at zero for the first year.

As to fuel consumption the Leon has a combined figure of 74.3 mpg providing a potential range of nearly 900 miles while the Altea’s Combined figure is equally attractive at 62.8 mpg.

Use of the Stop+Start system is hardly challenging, simply select neutral when at a halt and the engine will cut out, press the clutch and the engine cuts back in a smooth manner. The Brake Energy Recovery system ensures that constantly stopping and starting the engine does not drain the battery.

SKODA: The Which? Magazine Award for the Best Car Manufacturer 2010 has been won by Skoda.  The judging panel praised the Czech car maker for providing customers with more car for less cash.

TOYOTA: The British built Toyota Auris hybrid is due for UK sales launch on 1 July with prices starting from £18,950.  Toyota report that the car will produce only 89g/km CO2 emissions, return up to 74.3 mpg on the Combined Cycle and be zero rated for VED.