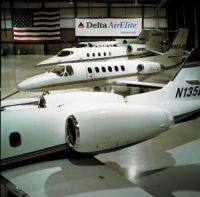 DELTA AIR LINES and its wholly-owned subsidiary, Delta AirElite, are introducing a service to allow customers to book scheduled commercial flights and on-demand private jet service in a single transaction using a pre-paid AirElite account.  Through Delta AirElite, Delta is the only US airline offering customers combined access to commercial and private jet services.  The airline was originally known as Comair Jet Express, and was rebranded in October 2001, by Comair parent airline, Delta.  Earlier this year it doubled its fleet size to around 45 aircraft with the acquisition of Kinston, North Carolina-based Segrave Aviation.  Whist it is possible to book a private jet for a regional flight from most major airports Lufthansa is the only other major carrier promoting such a service. www.airelite.com