New York return for Emirates A380 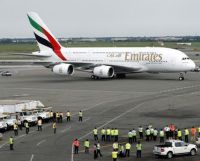 EMIRATES is to have another attempt to make the A380 superjumbo work on one of its double daily Dubai – New York JFK services when the aircraft replaces a Boeing 777 from 1 October.  New York was launched with a crescendo as the airline’s maiden A380 route in August 2008.  Last June, with the economic downturn, the twice daily service was withdrawn in favour of a pair of Boeing 777s, the aircraft transferred to the Dubai – Toronto and Dubai – Bangkok routes.  Emirates believe that by the Fall conditions will be right for its latest A380 delivery to be used on this service.  Emirates currently operates ten A380 aircraft, serving Auckland, Bangkok, Jeddah, London (LHR), Paris, Seoul, Sydney and Toronto.  In March 2010, the airline announced the start of A380 services to Beijing from 1 August and Manchester 1 September. www.emirates.com