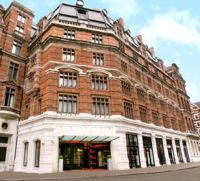 HYATT HOTELS CORPORATION has announced the signing of management agreements for three new Andaz upmarket properties.  The hotels will be located in Sanya Sunny Bay (China); Delhi (India) and Providenciales (Turks and Caicos).  These planned properties, situated in prime urban and resort locations, will be the latest additions to the expanding Andaz brand which, three years after its debut, includes 11 properties open or under development in six countries.  Already established are Andaz hotels in London’s Liverpool Street (2007), West Hollywood (2009), Wall Street (2010) and Andaz San Diego (2010).  Andaz 5th Avenue is scheduled to open in New York shortly.  Projects under way include Austin, Texas; Amsterdam; and Papagayo (Costa Rica). www.hyatt.com