Schoenefeld has a name change 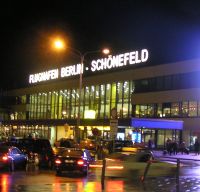 BERLIN SCHOENEFELD INTERNATIONAL AIRPORT, now officially named “Berlin Brandenburg Willy Brandt" and given the three letter code BER, is set to open on 30 October 2011 with the change to the winter timetable.  The airport will replace the already closed historical Tempelhof, and also Tegel, the existing international airport and in post war times a French military operation, whose last commercial flight is the day before.  Willy Brandt is a €2.5bn redevelopment of the existing previously East German Schoenefeld Airport.  Included is a second runway, much improved road and train connections, and a state of the art terminal.  SXF (Schoenefeld) already has easyJet, German Wings and Ryanair as tenants. www.berlin-airport.de