This four star hotel is situated in 200 acres of tranquil Manx countryside. The hotel is located between the Ronaldsway Airport and Douglas, the largest town and capital of the Isle of Man. The hotel has 90 large guest rooms, a modern health and fitness centre, hydrotherapy unit and an indoor swimming pool.

The Mount Murray Hotel is the only hotel on the island with its own 18 championship length golf-course. The course is just over 6,350 yards playing the maximum in length and a par of 71, with variable teeing all the holes can be played shorter for the less accomplished player. Starting with the first a 572 yard par 5 called Three Fields and completing the round with the eighteenth a 595 yard par 5 called The Long. The course has its fair share of hazards like water on the third hole to catch stray shots.

The course has its own club house opened in April 2007, it includes a large bar, snooker room, a 100 seat restaurant, The Wentworth Suite, The Balmoral Suite and The Turnberry Suite. All the suites can accommodate a different number of people for meetings and functions.

There is also a 24 bay driving range, 12 bays are covered so you can practice your swing in rain

or shine. The course has three professional golfers on hand to offer advice and help in any way they can. Private tuition can also be arranged on request. The range in the summer on weekdays is open at 8am and closes at 10pm and at the weekends it opens at 9am and closes 8pm. In the winter it opens all week at 8am, weekdays it closes at 9pm and weekends at 7pm.

Mount Murray Hotel and Country Club has the Lake View Bar and Lounge, for fine dining the Murray’s and Lake View Restaurant both have a relaxed and informal atmosphere.

As for the Isle of Man most will know it for the TT races and the triskelion but it is much more. The island has been inhabited since before 6500BC and has even been part of Scotland. Today, the island is a self governing British Crown Dependency with Queen Elizabeth II as the Lord of Mann but it is not part of the United Kingdom. The Isle of Man is also not part of the European Union. It has two official languages, English and Manx Gaelic. In Manx Gaelic the Isle of Man is called ‘Ellan Vannin’ and many signs are in both English and Manx Gaelic, the language nearly died out in the 1970s but has seen a revival. Nowadays the schools on the island are once again teaching the language to the local children and it is beginning to be spoken more widely.

The Tynwald is the name of the island’s parliament, founded in 979AD and it is said to be the oldest continuous parliament in the world. In July each year on Tynwald Day, they hold a ceremonial meeting at Tynwald Hill where titles are announced and new laws are described and enacted by Tynwald during the past year.

The island is 32 miles long and 14 miles at its widest point and is in the middle of the Irish Sea and lies closest to Scotland, then England and then Wales. 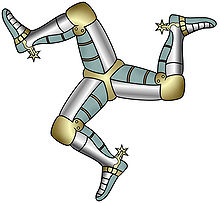 For centuries the symbol of the Isle of Man has been the triskelion, or the ‘Three Legs of Man’. Its origin is explained in the Manx legend that Manannan repelled an invasion by changing into the three legs and rolling down the hill and defeating the invaders.

Apart from the roads used during the TT races, there are plenty of other sights to see, Peel Castle has been proposed as a possible site for the Arthurian Avalon.

Being an island, seafood is a speciality, all kinds but you are recommended to try Queen Scallops 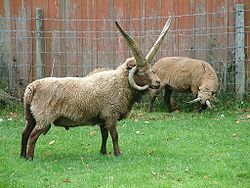 or ‘Queenies’. You also get very good crab, lobsters and all manner of fish. Fishing used to be a major industry on the island but this has declined over the years.

You should also try the national tradition dish of ‘Spuds and Herrin’ a plain dish of boiled potatoes and herrings. If you prefer you should try kippers, of course you know they are smoked herrings, especially good at breakfast. Manx kippers are smoked locally at Peel. The island has its own breed of sheep, the Loaghtan. They are bred for their dark red meat and are important in Manx cuisine.

Apart from the capital Douglas, there are other significant towns, Peel on the West coast, Ramsay in the North and Castletown, Port Erin and Port St Mary in the South. There are over 80,000 living on the island, but at times it seems that everybody knows everybody. 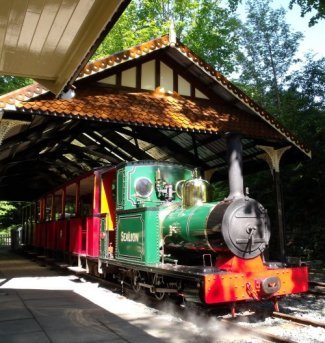 There is also the Groudle Glen Steam Railway that runs from May to September and is a narrow gauge manned entirely by volunteers, this was originally built in 1890s fell into disuse and has been restored over the last 30 years. The railways are mainly for tourists but some locals use them for commuting. There is an extensive bus network around the island on its 688 miles of public roads.

Ronaldsway is the island's airport and there are scheduled flights to the UK and to parts of Europe.

Douglas is the main port for the Isle of Man and a ferries are operated by the Isle of Man Steam Packet Company to Liverpool and Heysham, there are also summer only ferries to Belfast and Dublin.

The island has something for everyone, tourist or businessman, fine country walks and fine dining too in the many restaurants and hotels in the towns in all corners of the island. Maybe if you want somewhere nearby and different then you should visit the Isle of Man and the Mount Murray Hotel and Country Club in particular.