On Monday 21 November the 22nd FIFA World Cup finals begin in Qatar completing on Sunday 18 December, which is also the Qatar National Day. One thing for certain, France, the current holders, will vigorously try to hold on to the trophy. 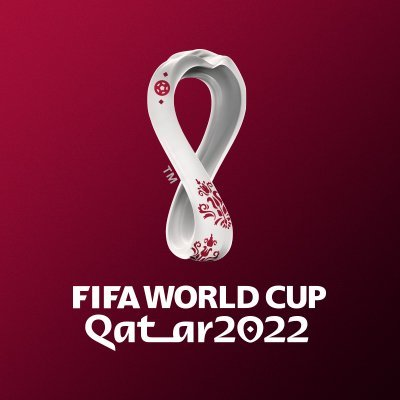 With football in the UK seriously disrupted, now might be a good time to consider a holiday/reconnaissance trip to Qatar, even if the actual competition is out of your pocket range.  You should be able to fit in a local soccer match at one of the tournament venues.  From now until June are the best months.  Qatar is very hot in July and August.

Malcolm Ginsberg, Editor-in-Chief of Business Travel News, was a guest of Discover Qatar just before the holidays with a quick visit.

The four nights covered the period 12 months in advance of the tournament and, the highlight of the trip, the first FIFA Arab Cup, a regional competition which also served as a trial for the real thing.

“Can I start by saying what was particularly noticeable was the friendly attitude of everyone concerned.  Qatar, one of the most cosmopolitan countries on earth, just 12% of inhabitants Nationals. 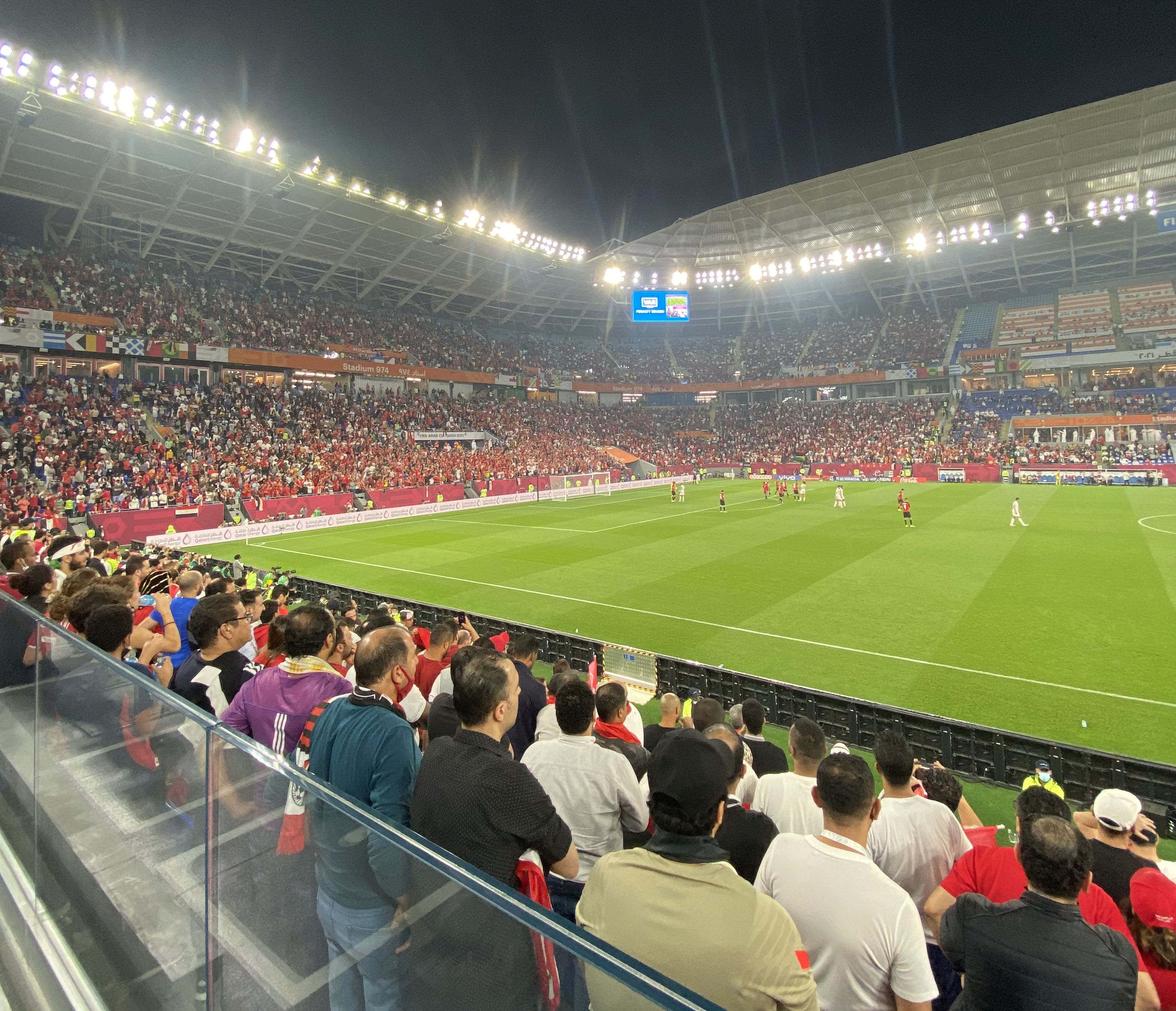 As for the football the competition was well organised, but a smoothing out of the traffic operation is required.  The noise in Stadium 974 for the Tunisia v Egypt match was tumultuous everyone standing up and a good-humoured crowd.

We were late getting in due to the traffic and outside one would have thought that at least six goals had been achieved.  In fact, it was 0-0 until the 94th minute when Tunisia eventually managed to score and take a well-deserved victory.  They were to go on and lose the final against a superior Algerian team who had already defeated Qatar. The hosts took it very sportingly. Mrs Ginsberg, not a soccer fan, enjoyed the match.  It was the atmosphere.

Qatar is ruthless when it comes to entrance into the country.  All must meet the vaccination rules, and entry to any enclosed space requires showing the ‘Ehteraz’ app, in effect a Covid passport.  Everyone is aware of the requirements, and it does not slow admission to the football grounds, the superb Metro, or any dining, shopping or entertainment venue. Frankly we should have it here.  If the pandemic is still causing international health and travel problems in November, Qatar will not change its rules.

November/December can be best described, weather-wise, as warm springtime in the UK.  A coat is never needed and even the open-air soccer stadiums are air conditioned.  If you are considering going for the finals, for even the early matches, get your booking in now.  A seven-night trip inclusive of four matches at a bed and breakfast 4-star hotel, return flight, airport transfers and a sightseeing tour with Qatar Airways Holidays from Heathrow, Manchester, Edinburgh, and BA out of Gatwick, will cost from £4,161.  If Wales were to get through it might mean the reintroduction of the Cardiff route, presently suspended. The US has been in the past the largest long-haul market into Qatar followed by UK.  Canada, United States, Mexico and Panama are likely to qualify but they are unlikely to bring in large numbers of fans.

This World Cup will be totally different from those in the past, even Russia last time around.  It is estimated that three million people attended the 64 matches in that tournament with teams being eliminated all the time as the tournament progressed. Flexibility with travel was paramount, likewise accommodation.  Doha will be a challenge for both Qatar and FIFA. 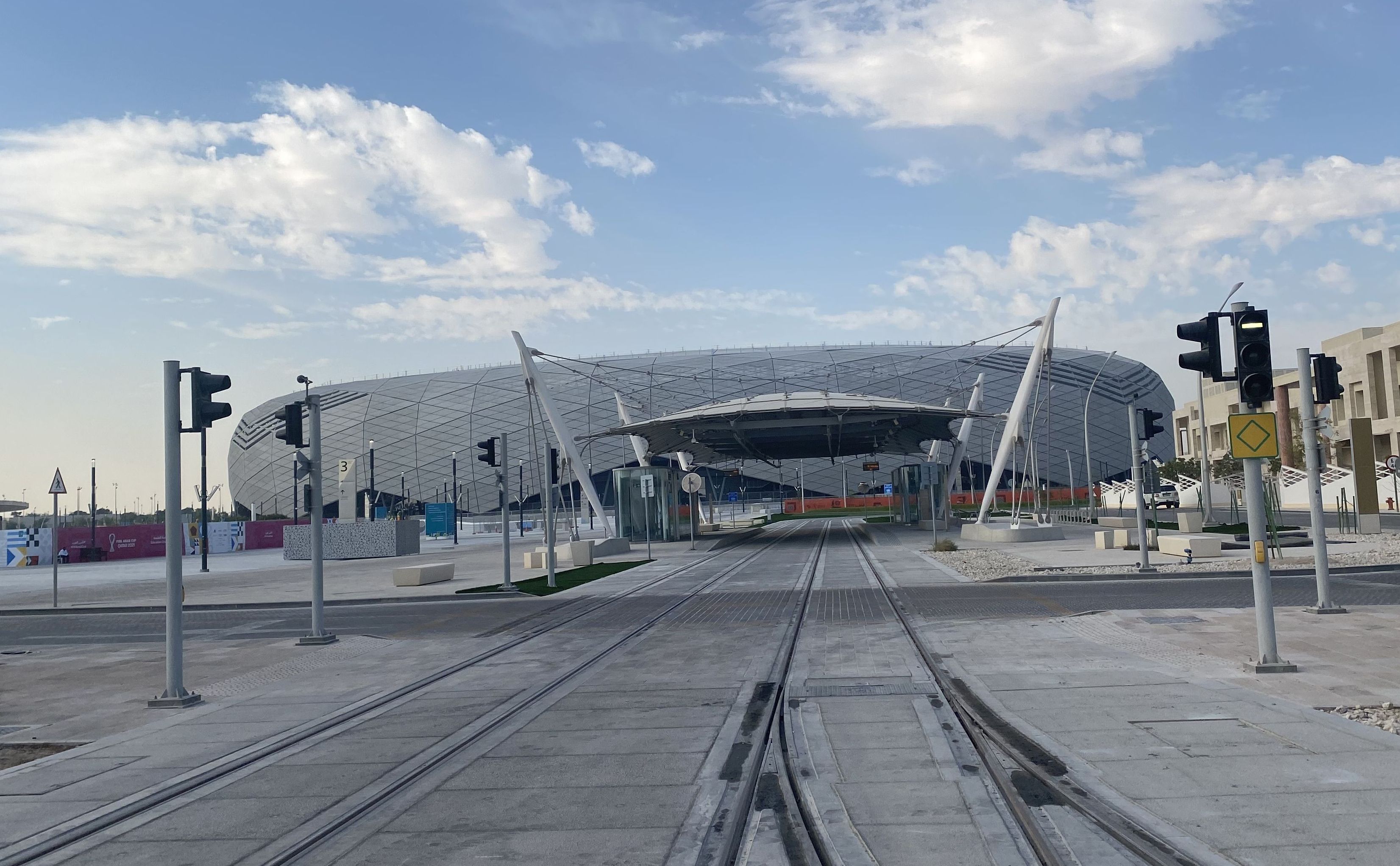 As the last games in the preliminary round reach a conclusion and progress is made towards the final I can’t see large numbers of supporters flocking in through the only land gateway, Saudi Arabia.  It’s a flight or standing in Trafalgar Square, by the Eiffel Tower, at Brandenburg Gate or some similar major rendezvous point around the globe.

Arriving into Hamad International Airport could not be easier, the airline (in my case Qatar Airways) very thorough with the Heathrow check-in and liable if the entry conditions were not met.

The award-winning Hamad makes transit easy and if arrivals have not got arrangements taxis queue to cheaply (less than £10 to city centre) take you to your accommodation.  If it is the Metro that you want that is a ten-minute walk and the trick is to use the lifts for your downward journey, saving the tedious escalators.  It is a 15-minute ride to Msheireb, the fast-developing central area where the three Metro lines (red, green and gold) converge.  If you choose to stay in one of the many hotels in Msheireb there is a fine courtesy local tram service but is all walkable and mainly pedestrianized.   In the so-called new city Lusail (home of the National Stadium) a similar tram network has just opened to bring in 2022. 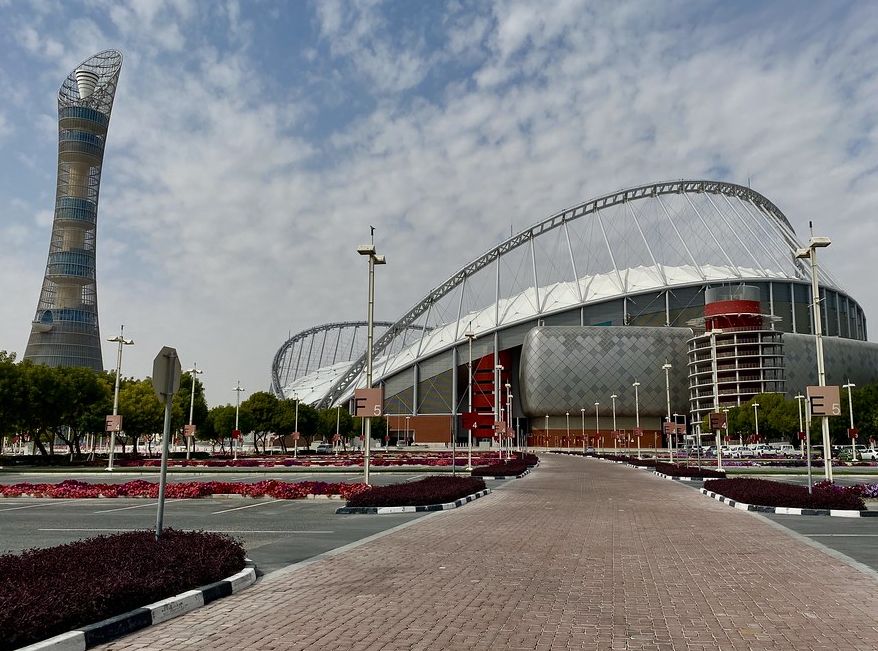 Either buy a local sim or try not to use your mobile phone based in the UK.  It can prove to be expensive. A four-journey card for two on the Metro cost Q10, a little over £2.50, a real bargain and you can buy an upgrade for the splendid premium carriages. The 900-passenger units are fully automatic and operate every 3/4 minutes.

As a general rule costs for dining are cheaper than in the UK.  Outbound, Hamad International Airport has a fine and competitive duty-free.

One serious word of critic which the authorities can easily put right.  “Discover Qatar on the Metro”, a nicely produced mini-guide which staff are keen to give out, does not show a single stadium.  It was a little confusing to start the tour.

In a subsequent BTN I shall be reporting on a selection of hotels and “What to Do in Qatar”.

The 2022 World Cup will feature 32 teams in eight groups of four.

Four matches will be played daily during the group stage, which will run over a 12-day period and see winners and runners-up progress to the round of 16 and a knockout competition. Matches will only be assigned to specific venues after the draw, so organisers can choose optimal kick-off times to suit television audiences in different countries, as well as supporters out in Qatar.

The draw for the finals is scheduled to take place in April.

Lusail National Stadium, the venue for the final has just been completed with a temporary capacity of 80,000 and as with all the other venues is cooled using solar power with a zero-carbon footprint.  The local tram network connects with the Metro system.  It is the nearest stadium to the West Bay Lagoon with its 5-star hotels and private yacht anchorages and about 15 miles north of Doha central.

Al Bayt Stadium is the only ground not actually in the city of Doha, but sited at Al Khor, about 30 miles to the north with a 60,000 capacity.  It is the venue for the opening World Cup ceremony and takes its design inspiration from the traditional tents of the nomadic people of the area.  Access for the most part will only be by road transport.  It will be used for one of the semi-finals (14 December).  The exterior walls and peaked roofs of each of the four stands surrounding the pitch are covered in polytetrafluoroethylene (PTFE) woven fibreglass membrane to create the tent-like form. A retractable roof connects the four stands to enclose the stadium.

Al Janoub Stadium is at Al Wakra at the end of the red Metro line with seating for 40,000 capacity. According to the designers, it was inspired by the sails of traditional Dhow boats, used by pearl divers from the region. The curvilinear roof and exterior profile references Al Wakrah's history of seafaring. The building is meant to resemble upturned dhow hulls arranged in a huddle to provide shade and shelter. The roof of the stadium is retractable, and is made from pleated PTFE fabric and cables, with the roof arches being 230 metres long.

Al Rayan Stadium first opened in 2003 but was demolished in 2015 and replaced by a new complex with a 40,000 capacity.  It is officially called Ahmed Bin Ali.  The most characteristic element of the stadium is the illuminated facade with an area of 39,000sq metres, which consists of multimedia screens covered by a translucent metal screen. The appearance of the facade refers to the values of Qatar, as well as elements typical for the landscape of this country. It is at the end of the green line with Al Riffa Metro station nearby.

Al Thunana Stadium is another 60,000 capacity venue completed one year ago and circular in design taking its inspiration from the traditional taqiyah (Muslim skullcap), worn by men and boys across the Middle East.  It is close by the old airport site next to the Doha Express Highway.  It is not well connected when it comes to the Metro but one can comfortably predict a fine courtesy shuttle service to a convenient station.

Khalifa International Stadium (68,000 capacity) originally dates from 1976 and has hosted many major events including 2006 Asian Games.  It adjoins The Torch Hotel, the Villaggio Mall shopping complex, Aspire Park and is sited between two stations at the end of the gold line.

Education City Stadium is newly built with a capacity of 45,000, due to be reduced to 25,000 after the World Cup.  It is at the centre of a sports and education complex and has its own Metro station on the green line.

Stadium 974 is a temporary prefabricated structure which you can see from the Corniche and is the only stadium to be relocated after the World Cup.  It has a 45,000 capacity.  It was the noisy (both inside and outside) venue for the Tunisia v Egypt match in the Arab Cup. Rad Bu Abboud on the gold line is the nearest Metro, a 25-minute walk of just over one mile.  The number 974 represents the international dialling code for Qatar (+974) and is also said to represent the number of shipping containers used in its constriction.  Some have been retained for hospitality and restroom use.

Qatar is a conservative Muslim country that has adapted to western practices.  Qatar Airways is not a dry airline (unlike Saudia) and offers the same pre-bookable special meals as any other carrier (including kosher).  No, pork products are not available, served or sold anywhere in the country.

The Secretary General of the Supreme Committee for Delivery and Legacy, Hassan al-Thawadi, said that “alcohol is not part of our culture, but hospitality is,” but if the experience of Liverpool fans who went to the Club World Cup in 2019 is anything to go by drinking is no problem. The fan zone’s bars, located behind Doha's golf club about 12km (seven miles) north of the Khalifa stadium hosting the rump of the tournament, did a brisk trade in Heineken and Stella Artois.  The regular FIFA sponsors have not backed out. Providing you stick to the Qatar rules, fans will not suffer a lack of alcohol.  Liquor will be around aplenty although many hotels are not licensed, nor are eating places.  Bars, as we know it, do not exist.

A holiday in Doha between now and June will cost somewhere between £100 and £150 per room per night bed and breakfast in a 4/5-star hotel.  Qatar Airways is now up to ten flights per day out of the UK at prices between £600 and £800 Economy return, plus a single British Airways Gatwick service.  Discover Qatar packages are available via the Qatar Airways website and from any good travel agent or tour operator in the UK. 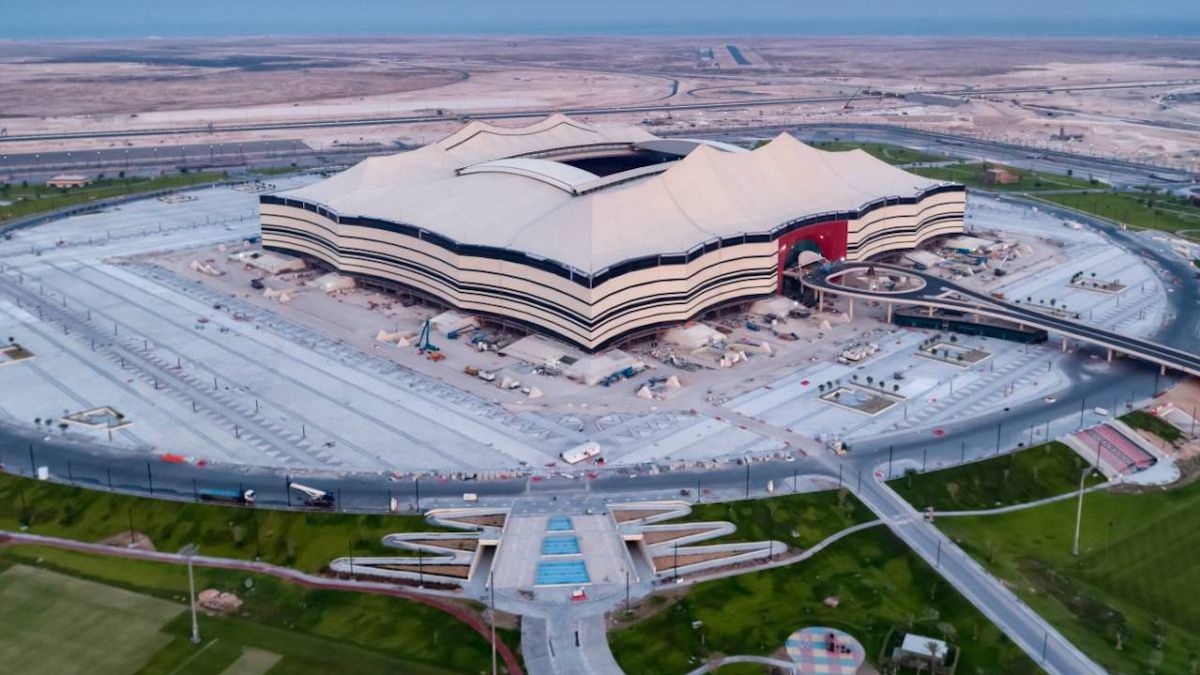