ON TOUR: The Dubai Airshow *

Our roaming reporter Alison Chambers of Emerald Media was at the Dubai Air Show as the event returned.  Here is her report.

It was superb to be back at an international air show, seeing friends and industry colleagues.  The fact it was in Dubai, a popular, easy to navigate show, bathed in sunshine, with its friendly hospitality, made it even better – right from the opening bagpipes of the National Police Band to the thrilling aerobatic displays. 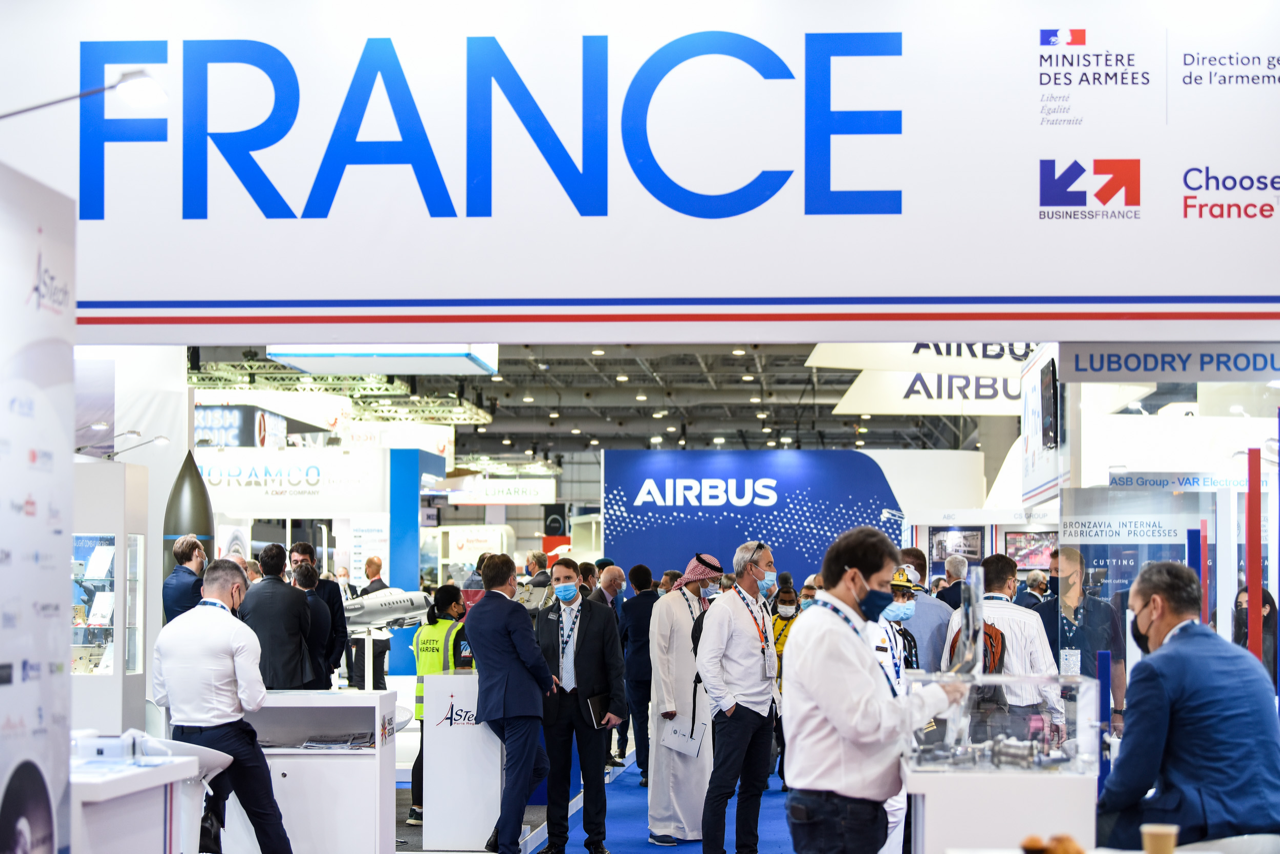 Social distancing was observed, face masks mandatory and any printed material, including the show dailies, were sealed in film. My Covid Dubai smart app we were advised to download pinged constantly with health updates. Meanwhile, entry to Dubai required proof of vaccination and a negative PCR test, while a day two antigen test was needed on our return to the UK.

This biennial show is the Middle East’s premier aviation gathering. It has something for everyone from commercial to business aviation, space to defence, UAVs and air traffic systems to training and Maintenance, Repair and Operations (MRO). Making up for a long absence of face-to-face networking, plenty of collaborations were ratified throughout the show with great aplomb. On the side lines of the big, showstopping airline orders, joint ventures were discussed – on the Ireland Pavilion, for example, with Tánaiste (Deputy Head of Government) Leo Varadkar in attendance and focused on strengthening economic ties with the UAE; and between Singapore and Sweden as respective companies Aeroter and Savback agreed a sales representation on the new ultra-light VRT 500 helicopter – to be built in Italy.

Unsurprisingly given the location, Emirates had a big presence debuting its new Premium Economy cabin mock-up, which will be available on flights to and from London, along with its Covid-safe First Class Suite, first shown in 2017, but highly relevant now.

Standing proud out on the static the airline’s iconic A380 signalled the flag carrier has no plans to offload the aircraft from its fleet just yet. To entice visitors to the UAE Emirates offered free passes to Expo 2020 and gave media guests a 10% discount on flights to visit the air show.

Aerospace’s Bill Read supplied all the Expo images.  He told me that while he was impressed with exhibits from both Russia and Kazakhstan, he was decidedly underwhelmed by the UK pavilion – pick a word and we’ll give you a poem, a voice instructed – well, it didn’t work.

With the air show declared the biggest ever edition, it brought together 120,000 people – 20% up on the 2019 event and 1,200 exhibitors from 148 countries.  Some US$78bn of business was announced during the show.  There were 20 country pavilions including Israel making its debut with State-owned Israel Aerospace Industries exhibiting manned and unmanned naval and aerial drones. There were also 80 start-up businesses in the new VISTA showcase.  The static display was home to 160 commercial, military and business jets, with the experimental Boeing 777X stealing the show.  Russia’s Irkut MC-21 narrowbody also generated plenty of interest. 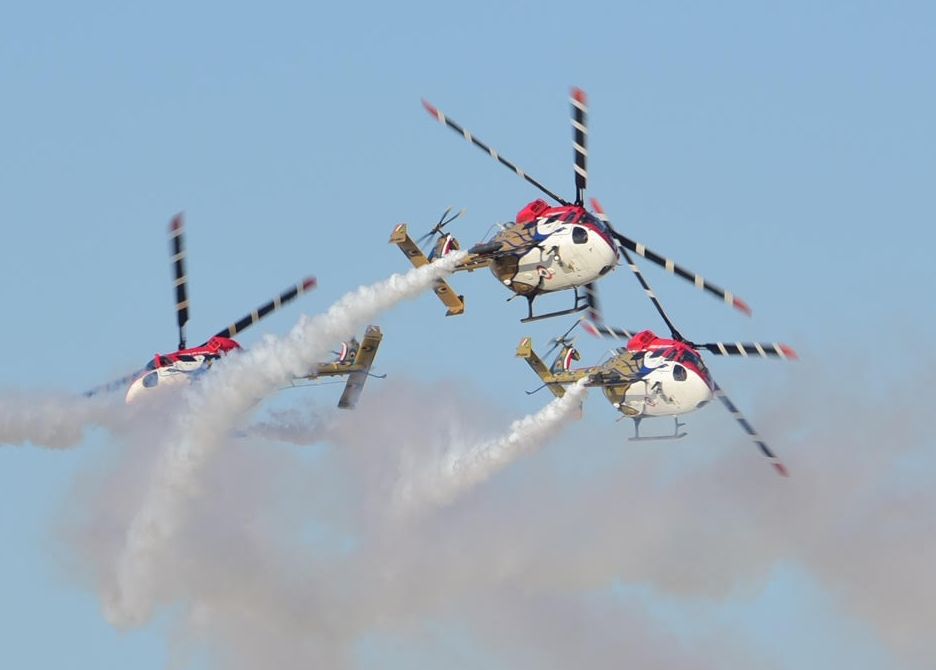 Aerospace 2050 was the centrepiece to 50 hours of conference discussion and smaller Fish Tank talks during the week. Topics covering cargo, air traffic management, aerial mobility were all discussed with a focus on sustainability – a subject integral to many a conversation during the show.  Aviation fuel giant, Air bp, a main sponsor and key player in helping the aviation industry meet its sustainability goals, spelt out the theme at the show’s main entrance and registration area.


All eyes on Africa 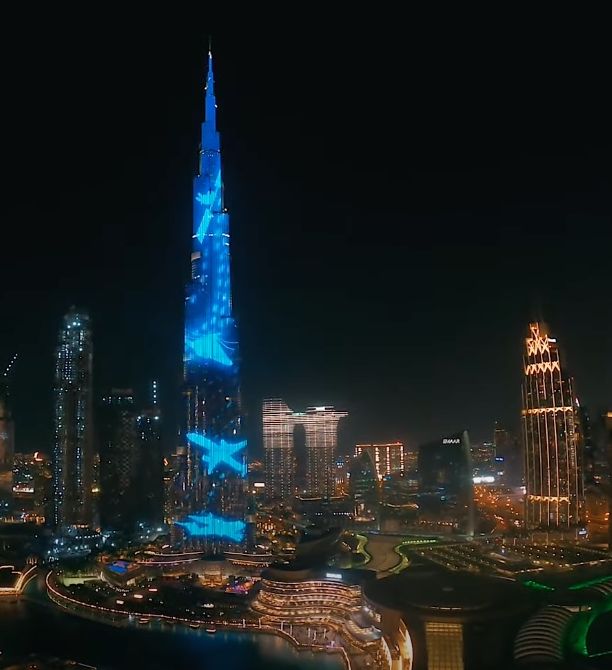 Africa had an exceptional show.  Complementing flag carrier airliners from Uganda, Tanzania and Ethiopia on the static, BestFly of Angola announced it was taking an E190 from ACIA Aero Leasing, with CEO Nuno Pereira acknowledging the airline is eyeing four more, plus more turboprops too. Air Tanzania ordered a 767-300 Freighter, plus two 737 MAXs and a 787-8 Dreamliner.  Nigeria’s Ibom Air signed for 10 Airbus A220s, while the country’s Overland Airways committed to three E175s plus options on three more.

Airbus, which impressively turned the Burj Khalifa blue to show its new corporate identify on the eve of the show, topped the leader board scoring 400 plus commercial orders, including a 225-strong commitment from Indigo Partner airlines. Wizz Air (75 A321neos, plus 27 A321XLRs);  Frontier (91 A321neos) and Volaris (39 of the same type, plus 21 A321neos) and Chile’s JetSmart (two XLRs).  Boeing announced 101 orders, including a 72-strong 737 MAX deal with Indian start-up Akasa Air. 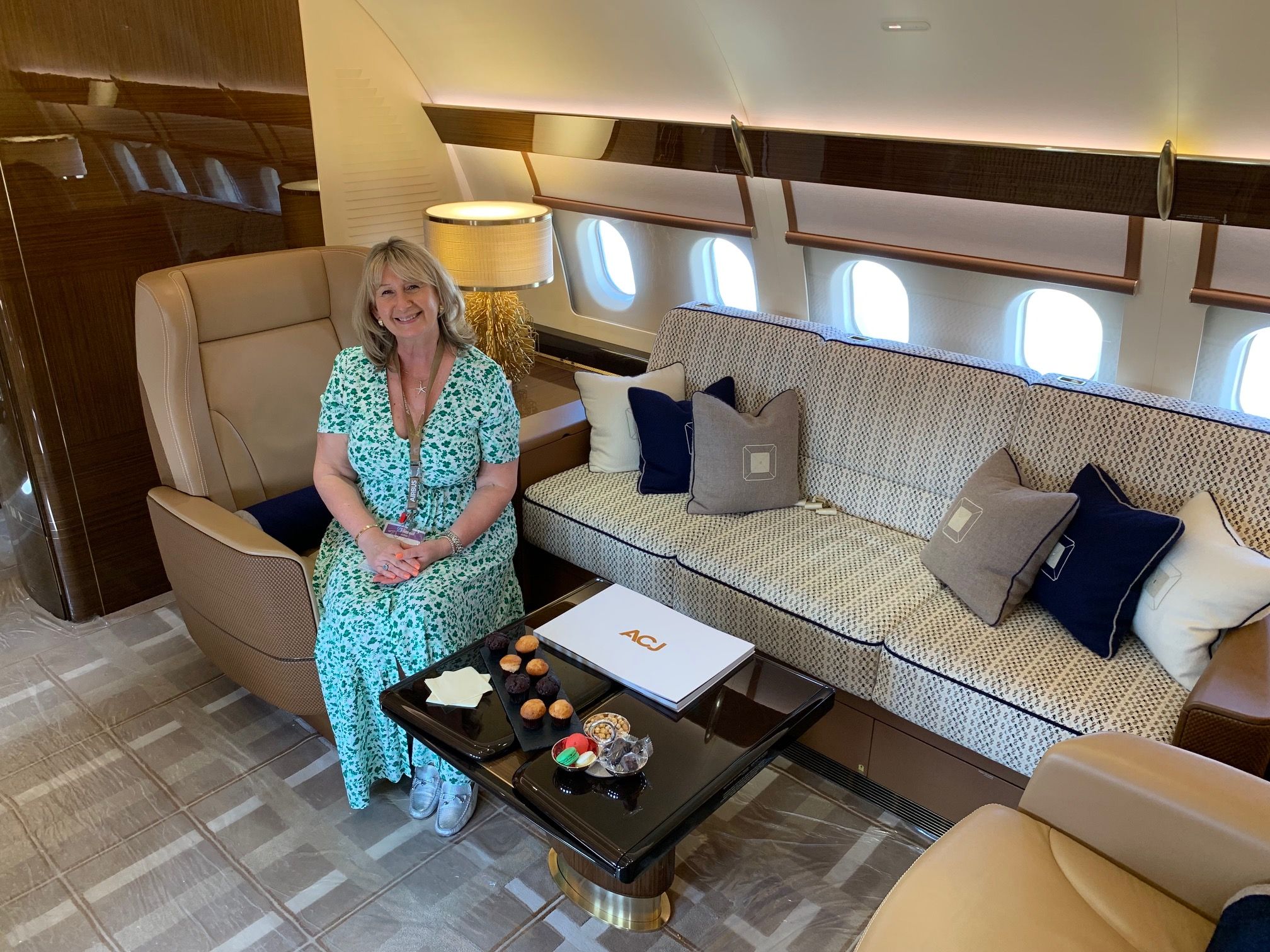 My personal highlight was seeing the stunning Farnborough-based Acropolis Aviation’s ACJ320neo make its global debut.  Emerald Media announced the order (launching the ACJneo family) back in May 2015, so it was pleasing to see it draw so much acclaim.  It features the biggest shower of any business jet currently on the market, a fixed double bed and a 15-hour flying range.  Interior designer Yves Pickardt from Pinto, was also in attendance, to honour the aircraft’s first outing. “It really is a beautiful aircraft,” Airbus ACJ President Benoit Deifforge remarked.

Airbus Corporate Jets has 200 ACJs in service, including 60 in the Middle East and North Africa. The A220 is also offered as a corporate jet – known as the ACJ Two Twenty. Switzerland’s Comlux announced it was placing an order for two Two Twenty aircraft with Dubai’s FIVE Hotel Group holdings (on Dubai Palm and Jumeirah Village Circle) to run as corporate shuttles.  (Note: The Spa at FIVE JMC is terrific and desserts in the restaurant are delicious – overseen by a Michelin star chef.  Liz Moscrop from Gearup Media and I had a memorable evening there. 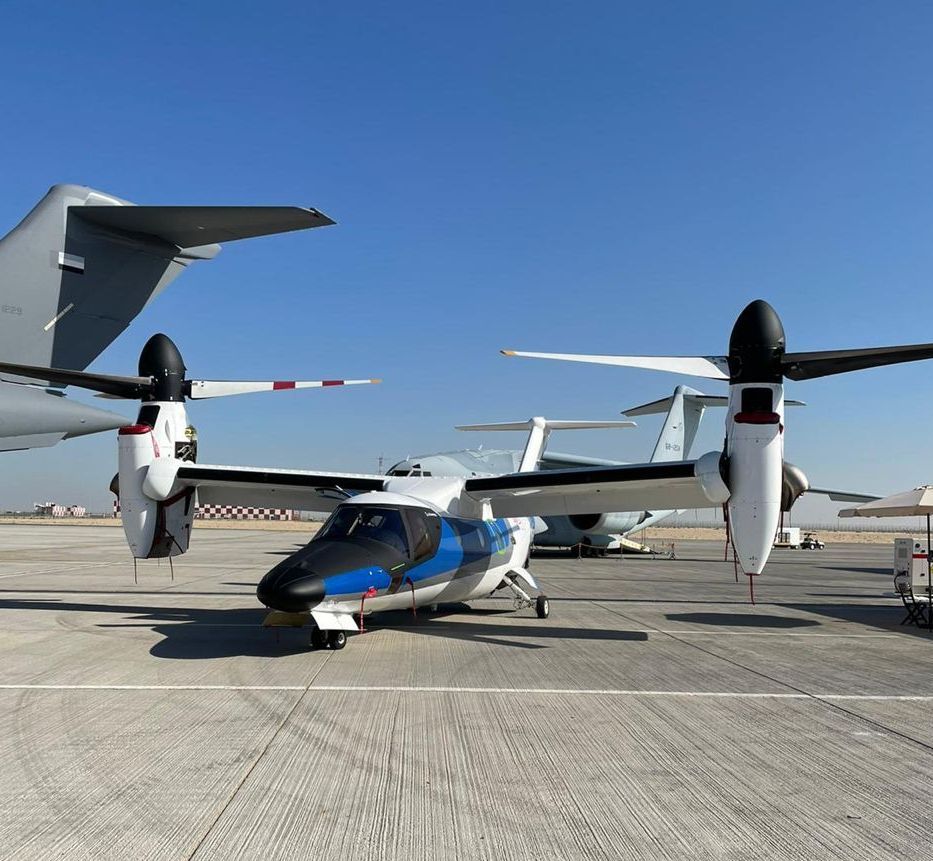 I also visited the brand-new Dubai Helipark at the business aviation centre. Operator Air Chateau is gearing up to acquire helicopters of its own.  The new facility, adjacent to the established business jet FBOs of JetEx and Falcon Aviation, formally opened during Dubai Show week. Its first visitor was a German-registered ACH 145, sponsored by Airbus Corporate Helicopters, its interior furnishings stylishly upholstered with vegan ‘Ultraleather.’ The Helipark offers seven landing pads and is working to secure partnerships with Dubai’s flagship hotels who have roof top helipads. Already a number of international country teams heading for the 2022 World Cup in Qatar have expressed interest in basing themselves in Dubai.

Russia came out strong with its collection of helicopters at the show. OEM Russian Helicopters showed its Aurus luxury automotive brand teamed with the Ansat Aurus helicopter, complete with a copycat interior of the limousine. It also announced an MoU for four helicopters with Ras Al Khaimah Police Force, plus an order for two of its Mi171A2 helicopters for a Peruvian customer.

Back at the 2019 Show Falcon Aviation and Leonardo announced plans to build and operate a dedicated Vertiport terminal to support Expo traffic. This year, Leonardo’s AW609 Tilt Rotor visited the Expo then took time out from development work and demos to make its Air Show debut.  Leonardo is flight testing for FAA certification with three prototypes.


And to conclude – Freight expectations 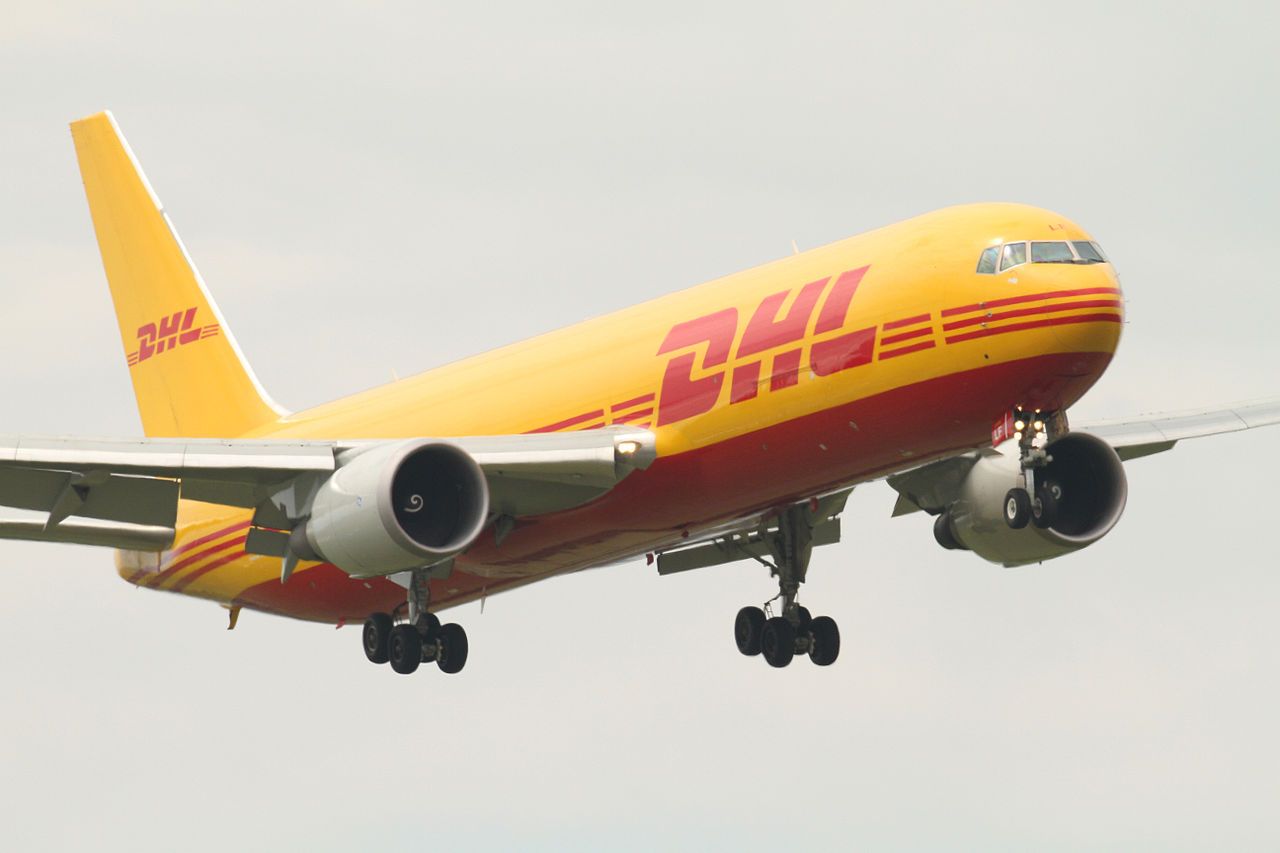 At the start of the show, Rob Watts, Head of Consulting at aviation services group ACC Aviation, based in Dubai, predicted the show would shine for freighters.

Air cargo has been exceptionally strong throughout the pandemic as a vital, reliable mover of goods with carriers converting passenger aircraft to carry freight.

Airbus launched the A350 Freighter with an order for seven aircraft from Air Lease Corporation.

Boeing didn’t announce a 777XF freighter, as expected.  However, it did secure 20 Boeing Converted Freighter (767-300 and 737-800BCF) orders from DHL Express and Icelease.  It is expected to add three conversion lines for its B737-800BCF across North America and a passenger to freight conversion centre at London’s Gatwick Airport with KF Aerospace.  Emirates SkyCargo is to team with IAI to convert four B777-300ERs to freighters.  Most surprisingly perhaps, as Rob and other industry observers noted, was Embraer’s interest in turning older Embraer 190 series to freighter variants.

Amid all the buzz and energy that characterised Dubai 2021, local artist Latifah Mohammed painting a giant Dubai skyline.  Some contrast and Bravo to her! 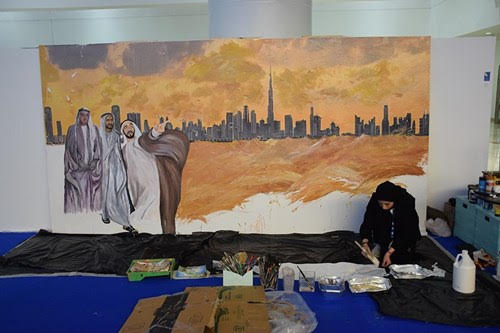 Brilliant report as always, Alison! Felt I was there with you. Grateful thanks.