Chris Tarry, BTN’s air transport analyst is also something of a cruise fan.  This first report is sent by wi-fi from Regal Princess which left Southampton 30 September on a seven-night trip and is due back 7 October. 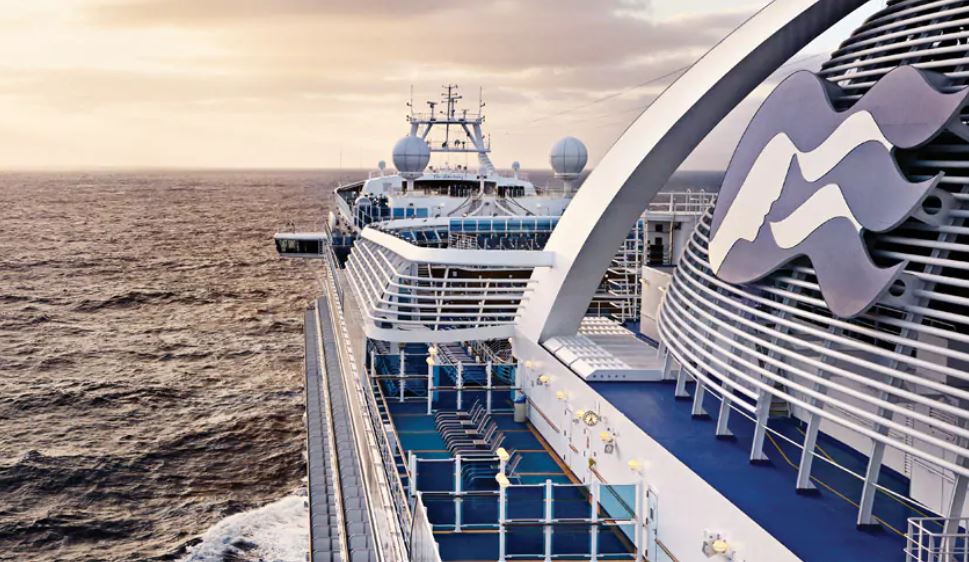 When we made a booking in mid-March to cruise on Regal Princess, departing on 30 September for La Rochelle, Bilbao, La Coruña and Guernsey, there was perhaps no certainty that the cruise would take place. However last Thursday the ship did leave Southampton and into a force eight gale.  Bordeaux, deep in the Bay of Biscay, was to be the first port of call with La Rochelle cancelled, and Guernsey had been dropped some time back.  Using tenders this time of the year can cause problems.  If you read this report on Monday 4 October we would hopefully be docked in La Coruña having been  to a rather wet Bilbao.

In a number of ways the departure was an important moment in the restart/recovery phase of cruising from the UK, for although there had been regular seacations in "home waters" this was the first Princess cruise into the deep ocean.

It is a very long time since we were last on a Princess ship which was in fact an early Golden Princess voyage when we were guests of the then owners of the line (P&O) where the focus was on ensuring that we, as analysts, could understand the value of and prospects for the company.  Then part of P&O Princess the combined lines were subsequently sold to Carnival who still own them today. P&O operates as an independent Southampton-based sister company with Princess now based in Miami.

Key to the whole voyage was the Princess "Medallion", a small wearable device populated with all of the cruise information necessary – including most importantly credit card details – which would normally be taken at check-in time at the desk.  Even having done this there was still a need to queue up to collect our medallions, as they cannot be sent to addresses outside the USA.  Clearly the move to "touchless processes" has been accelerated replacing the "key card" and are much more powerful and can be used for contact tracing on board.  However they only work on the ship.  The "lost passenger" who delayed our departure by an hour from Bordeaux got separated from a tour group.  The medallion did not help.

Even before being able to pick up the device there was a need to return a negative result from the landside lateral flow test.  When arriving at the Mayflower Terminal facility we were told to use the walk-through facility at the Ocean Terminal.

The walk-through test was efficiently organised, in what was in fact the arrival hall, from where we went to departures, but had to sit until we received the results which in our case was within 22 minutes of having the test taken.

After collecting the medallions and having passports scanned we were again asked to sit down to be called forward to pass through security and board. Whilst much had been made of having an allocated time to arrive it seemed that it was more of a "free for all". In reality from being dropped off to getting on board took about an hour which is about normal for getting on a cruise ship.

Once on board the "default position" is that you wear masks for all of the time you are walking about or in a crowd – whilst I understand it will only be enforced if you are in a queue or a crowd, the reality is that from a behavioural perspective the only time masks are not worn is if you are in your cabin, sitting in a bar or restaurant or on deck. All crew however wear masks all of the time. Similarly on excursions and on the transport the requirement is that you wear a mask.

Clearly, in order to reduce the number of "proximity engagements" – stewards cannot enter your cabin if you are in it and many more things seem to be "on request" something albeit of necessity risks reducing the visible service element which is important in all respects and not least to the crew members given the importance to them of how they are rated in various surveys let alone any additional recognition in the form of an envelope with some cash in at the end of the cruise from passengers.

Against this background, capacity is still being controlled as there is a desire, if not a need, to make sure everything necessary for the new environment works and in this respect there are some 1,900 passengers on board where when full the number would be closer to 3,500 – and there have been some hiccups where a little bit of extra training or retraining would help.

Certainly there is greater space than might usually be expected between tables in bars and restaurants and acceptance of "social distancing" will inevitably have an impact on determining usable capacity which is not only dependent on the number of berths. There are also arrows in public areas to indicate direction of flow as well as limits on the number of passengers in elevators.  No problems here with the ship half full.

Buffets are back, but generally you are served plus a small number of plated "take and go" options – In addition to the normal hand sanitisation stations guests wash their hands at the entry to the buffet.

The general view of most crew members is that it will not be until this time next year that activities will be broadly back to normal but as in many cases it is difficult to separate what might be expectations from hopes.

One of the most poignant observations, so far, has been from one of the excursion staff who thanked us for coming back "because it gave him his job back"; for him and his many colleagues until a few months ago they were at home with their families but without contracts were not earning money – now they have returned to sign up for 9-10 months at a time, away from their families but able to send money home – something that provides an important perspective on how the industry perhaps has always worked and in this respect somethings haven't changed.

It sounds as if Mr Tarry was less than impressed. No mention of the entertainment or programme on board, nor the speciality dining. Bad weather does not help.