The Nine Elms and Battersea Power Station stations on the Northern Line will welcome their first customers next Monday bringing key parts of south London within 15min of the West End and the City.  The stations and track are the first in London since the Stratford extension to the Jubilee Line opened in 1999.

The two step-free Zone 1 stations are set to dramatically improve the connectivity of these vibrant south London neighbourhoods and contribute to the capital’s recovery from the pandemic at a vital time.

Major construction on the 3km twin-tunnel railway between Kennington and Battersea Power Station, via Nine Elms, began in 2015. Despite the challenges of the pandemic, the construction project has stayed on track for an autumn opening.

Work is also nearing completion on Art on the Underground’s major new permanent exhibit by London-based Brazilian artist Alexandre da Cunha, which is being installed at Battersea Power Station Underground station ahead of the launch. 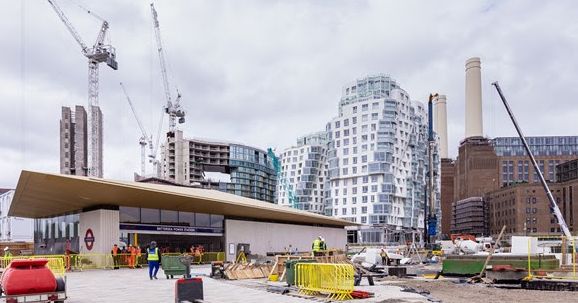 But for Nine Elms station, will it be possible to get under/through the adjacent rail embankment (Waterloo lines)? Otherwise, the local market to the north (including the US Embassy) is cut off.