Northgate Vehicle Hire has published its annual service station update, with perfect timing.  The school holidays and lifting of most restrictions means that the Motorway system is exceptionally busy.

Extra’s Cobham services on the M25 is the clear winner, with a score of 86.6/100 for 2021. With every desired facility, it’s a safe haven for drivers needing a rest – and if you’re travelling in this part of the country, you might well need it. A survey released last year by Transport Focus stated that the M25 was the fifth most hated motorway – perhaps due to its 100 miles of variable speed limits and up to six lanes in places.

Coming in second, with a score of 83.9/100, is Beaconsfield at Junction 42 of the M40. Another Extra service station, it boasts a range of facilities – such as KFC, El Mexicana, Greggs and Pizza Express, an array of shops, and a play area.

The Midlands services of Peterborough round off the top three, with a score of 72.6. Located on the A1 (M), it has fewer eateries than the top two, and boasting 400 spaces, has much less room for drivers.

Cambridge services on the A14 and Strensham on the M5 complete the top five, with scores of 69.5 and 69.4 out of a possible 100, respectively.

If you’re heading to Scotland, you’ll want to stop off at Gretna services. Eighth on our list, it has everything, minus the play area. You can choose from one of the six eateries, four shops and a stopover hotel. If you’re not going quite that far north, Leeds Skelton Lane on the M1 is a safe bet. It may not have an arcade like Gretna, but it does boast a play area to help kids burn off some of that holiday excitement and plenty of shops and food places to grab a quick bite.

All these service areas charge for a stop of more than two hours, but at least for the moment number plate technology is not in place but do watch out when entering. 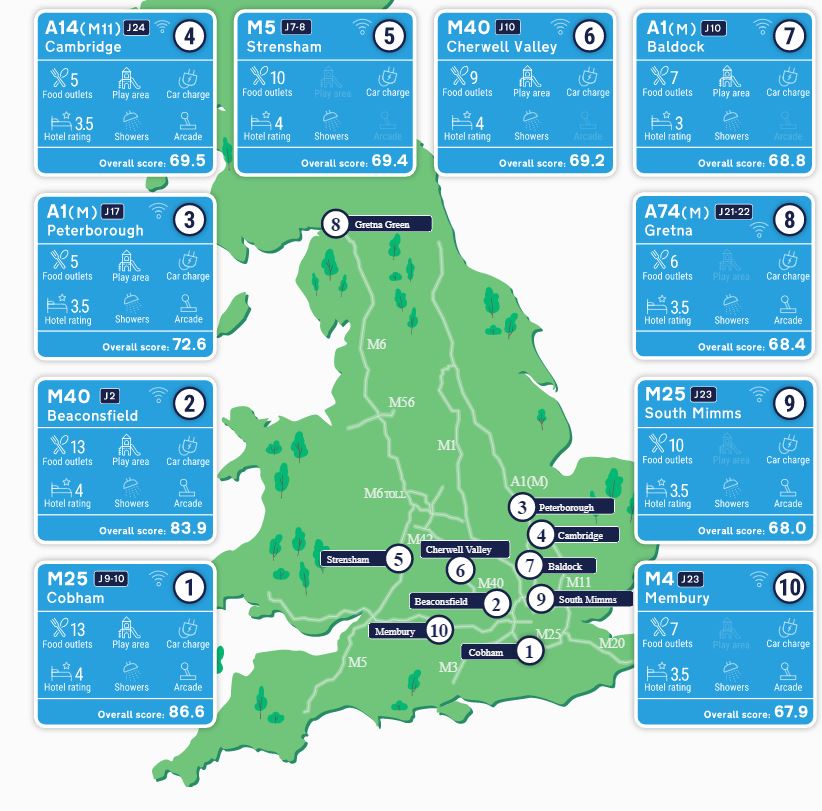 Who are these people that have never heard of Tebay Service Station on the M6 (see Channel 4) or Gloucester Services at Junction 11a on the M5 or are these two so far ahead of anything else (which they are) then they don't deserve a mention!

This survey is a joke. They obviously never visited Gloucester services on the M5 or Teebay setvices on the M6. They stand head and shoulders above the rest!

I am astounded that Tebay (M6 Lakes) is not mentioned. I also like Winchester services on the M3 because although lacking facilities, it is generally quiet.

How Cobham is at the top mystifies me. And getting in to South Mimms is a nightmare. For me Beaconsfield leads and it’s not really on the Motorway.