The Mazda CX-30 is a fine car but from an earlier generation. 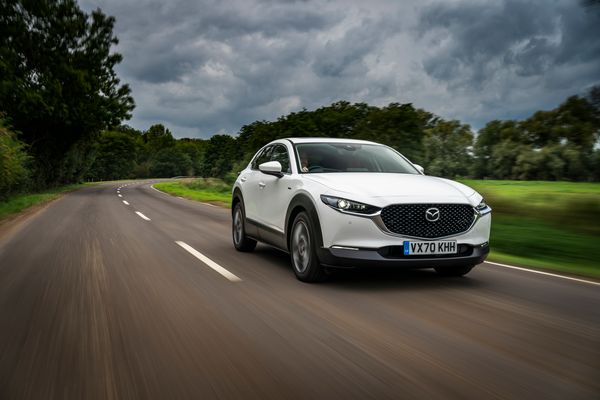 It has a nice six-speed manual gearbox and is petrol driven.

However, your Editor-in-Chief was privileged to try the MX-30 fully electric Mazda back in April (See Road Test).  Other than sharing a similar name the two cars have little in common but are both quality products.

The MX-30 is currently limited to 120 miles between recharging. The CX-30 will take you well over 400 miles before needing to fill up, but non-stop runs of that length should not be encouraged. As already noted, it is an outstanding car. The CX-30 model range will be with us for some time.

One thing for sure, BTN was not going to turn down the opportunity of a week’s loan of one of 100 ‘Anniversary Edition’ Snowflake White CX 30s built for the British market to celebrate the centenary of the Japanese manufacturer. It was founded as a cork manufacturing company in Hiroshima in 1921.  In 1931 the first venture into the transport market was an auto rickshaw and its name will forever be linked to the development of the rotary Wankel engine in the 1960s, together with NSU.

Mazda is also synonymous with motor sport, in 1991 becoming the first Japanese automaker to win the 24 Hours of Le Mans overall. With well over one million now built the MX-5 can be called, with justification, the world’s most successful sports car.  (See BTN 14 December 2020).

The Mazda CX-30, described as an SUV, whilst it shares much from the Mazda parts bin, is a totally different car to the MX-30, from the slight rumble you hear coming from under the bonnet, to the door entry system.  The CX30 is conventional in the way you get in, with the doors hung where you would expect.  With the electric car, and designers/engineers needing a different way of achieving the finished product, the doors are hinged to open from a central position.

Under the bonnet power comes from Mazda’s Skyactiv-X engine – essentially a 2.0-litre naturally-aspirated four-cylinder petrol that claims to provide the low-down torque and fuel efficiency of a diesel, whilst retaining that high-revving petrol character. That’s made possible by a system called ‘Spark Controlled Compression Ignition’ that allows the engine to switch between spark and compression ignition methods whenever required.  Reckon on about 40mpg on a car that does 0-60 in 8.5sec.

Small details are important.  The sunroof is electric.  Next to the button is a storage space for glasses.

The tailgate is electrically controlled too.  This makes shopping just that bit easier as one approaches with a loaded trolly.  It’s at a nice height also.

Another minor but very useful feature of the Mazda is the speed indication showing the legal limit at any point.  One should never be caught out with a red line on the speedo, replicated on the head-up display, and also highlighted on the navigation map.

Some manufacturers only supply a basic car with everything an extra. This does not work for several reasons.  Firstly the final price goes up substantially (in one case from £80k to £100k), but if you want your vehicle to be built to a certain specification the waiting time can be up to three months.

Not so with the Mazda CX-30.  For £31,700 you get an impressive specification with no extras required.  Typically the electric door mirrors auto close when locking the car, are heated and tilt down when reversing.  18in wheels.

The infotainment is clear and controlled by the central click wheel, the climate controls are separate and the leather seats are nice and supportive. The steering wheel is heated as are the front seats which for the driver include an 8-way power adjustment and memory.

The ‘extras’ are too many to highlight here but as well as a reversing camera there are front and rear parking sensors (with audible warning) and a parking aid system.  The AM / FM / DAB radio features a 12-speaker Bose surround sound system, with Bose Centre Point, Bass match and Audio Pilot technology.  There is an integrated navigation system with 8.8in TFT colour centre display.

When it comes to driving, the car is effortless and extremely stable in very wet conditions where grip was 100% throughout.  On a long motorway run, and a little patience, the simple-to-use cruise control and Mazda radar system enables the driver to set the car at 70mph and just watch for other the other traffic in the lane to slow. Cruise control looks after you.  There is an audible blind spot monitoring system and lane departure warning.

Prices start from £22,945 for the luxury compact crossover.