ON TOUR: London is alive

Not for BTN the media rush to Faro and other Portuguese holiday places on the Green List.  That will wait.  There is more than  enough excuses to try out what is on offer in London town writes Malcolm Ginsberg. 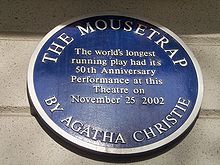 First up was a booking for The Mousetrap at the now splendidly renovated St Martin’s Theatre, its home since 1974 having opened next door at the Ambassadors Theatre 25 November 1952.  Monday (17 May) was the 28,200th performance since then, a Guinness World Record, only punctuated by the Covid pandemic.

We booked within hours of the box office opening, £50 each for the stalls back row (good views), socially distanced in pairs, and digitally ordered ice cream to be delivered to our seat during the intermission.

With a theatre critic’s hat on the first act was a bit slow but did introduce the characters.  Act 2 is all about why it is such a long runner. And of course the murderer has the final say.  “Do not tell anyone who I am!”

The long list of properties taking part in the extended Hotel Week London made the choice of nightstop easy, The Savoy, the Grand Dame of London Hotels, 10min walk away (more anon).  Now managed by the Fairmont Group, known for its discreet and welcoming service, it is gradually easing itself into life with guest rooms limited at this time but full facilities available (including the gym and swimming pool).

An inspired idea has meant the end of the fountain and car turning circle at the hotel’s entrance, replaced by the very quicky popular Solas, an outdoor (heated) al fresco dining concept.  Its opening marks The Savoy and Bowmore Islay Single Malt Scotch Whisky’s new collaboration; the bringing together of two brands, both celebrated for their history and innovation.

On a damp Monday evening we walked up the hill towards Covent Garden, the area now very much pedestrianised and with a huge choice of eateries.  It bucketed down and The Ivy Market Grill was the nearest quick escape, a great choice, and especially so under the circumstances.  Complimentary Champagne too, celebrating the first day of dining inside.  A fine meal (£60 for two – no drinks) and the downstairs, once a private area, particularly recommended.

Coming out of the theatre the heavens opened up again.  A quick shout for a cab.  “Take me to The Savoy please!”  The fare was £7 including a generous tip.

And on to Friday and another first night, ABBA Mania, something different, at The Shaftesbury, under major refurbishment, a wonderful Edwardian theatre, and very comfortable.  All three tiers were in use, a way to maximise space within the current rules.  Top balconies are not always used.

This time our hostelry was the London Marriott Grosvenor Square, overlooking one of London’s most interesting central gardens with memorials to the RAF Eagle Squadrons (mostly Americans), US President Franklin Delano Roosevelt and 9/11.  To the west of the Square was once the US Embassy, now in part demolished to become the Chancery Rosewood hotel due to open in two years’ time.

Best described as "5-star contemporary" compared with the classic Savoy, the Marriott boasts a Gordon Ramsey restaurant & bar, very busy even at this time, plus contemporary Asian sharing dishes at Lucky Cat.  One of its great appeals is nearness to Selfridges and Bond Street for shopping.  No swimming pool but an excellent gym with the latest Life Fitness machines, the treadmills offering a TV run at a place of your choice (I picked the Auckland New Zealand quayside – it was sunny).  With the pandemic the Marriott has taken the opportunity to complete the refurbishment of all the 237 guestrooms and suites, reimagined by one of the world’s leading hospitality interior project practices, RPW Design.

Where to eat?  The choice is enormous and with the success of The Ivy from the Monday, the famous West Street establishment near the theatre seemed the obvious choice.

But the Ivy (members only) Club next door could take us.  Matching menu and Art Deco decor.  A simple meal, plus beer and coffee.  £80.  Superb service.

ABBA Mania is on for a limited run (until Sunday 6 June) and then goes on a UK tour.  It has delighted more than three million audience members since its formation in 1999, performing over 3,000 live shows in 30 countries across the world – from Germany to Tahiti, Sweden to Venezuela, USA to Australia with a London West End season in 2003. Many of the audience were not alive when the Swedish group made its breakthrough at the 1974 Eurovision Song Contest (at Brighton) with Waterloo, the song named after the battle, not the station.

Everyone was rocking in the aisles. All age groups.

Come down by train, or fly.  There are some great bargains available.  London is alive.