A survey by Business Travel News yesterday (Sunday 21 March) indicates that the public for the most part is taking up the opportunity to fly regionally from next Monday (29 March) and not sticking to the guidelines suggested by the English Government, at least for the Easter break.

Under the English lockdown rules people are free to travel from 29 March, but this is not being encouraged by Whitehall.

However, Gatwick, Luton and Stansted airports lag well behind Heathrow in take up. This may be due to BA connecting international passengers returning home for the holiday and utilising available seats.

With some services now almost fully booked will BA put on extra flights?

Whether this continues after the holiday remains to be seen!

Our data is from OAG, CAA and the airlines’ own booking sites.

Confusingly, in Scotland, the relaxation does not take place until 2 April and for Northern Ireland it is 12 April.  From a flights point of view Wales is in lockdown with very limited services from Cardiff Airport, by Loganair, to Edinburgh and Glasgow.

The advent of the world wide web and the growth of low-cost carriers has triggered a surge of direct bookings over the last two decades.  Air carrier marketing has also changed in that the fares are now public very much in advance of the actual flight.  Some airlines, in particular easyJet, have a complete profile of its pricing months in advance.  (see below).

From a survey point of view BTN (and of course prospective passengers) can see ahead and get a very clear indication of what is available in the short-term and the pricing.

For the next few months however it seems that people are not booking flights, concerned where the pandemic is going, and perturbed by rumours (and in some cases the truth) that they cannot get their money back even when the flight is cancelled by the airline.

A voucher offer leads to many questions.

Five airlines supply UK domestic flights (British Airways, BA Cityflyer, Eastern Airways, easyJet and Loganair) plus Aer Lingus from Belfast City with an Irish-registered aircraft, an anomaly.  Ryanair does not now operate UK internal flights as it only has a single British registered aircraft out of the 440 it flies.  It has a British-registered operation and is a member of Airlines UK.

Our survey is focussed on the Belfast – London route plus examples for Eastern Airways and Loganair.

Next Monday, 29 March, even with restrictions lifted, there will be just five Northern Ireland flights, two from Heathrow to Belfast City Airport, and one each from Gatwick, Luton and Stansted to Belfast International, in total offering 1,040 seats.  Two years ago, on the same day, 5,034 seats were available OAG tells us.  The CAA has not published the full domestic figures since March 2020. In April 2019 3.6m passengers flew on UK internal flights.  Last April virtually nobody flew!

Travellers from Heathrow need to be careful whether the service is operated by Aer Lingus (T2) or British Airways (T5). It can take 30 minutes to get from one terminal to the other.

The BTN survey lists the availability for Monday 29 March and Thursday 1 April.  We have quoted an Economy single fare which includes £13 Air Passenger Duty (APD).  If you want to go to London from Belfast for the day this can only be done via Heathrow.

Using the BA site is very easy and the airline is encouraging early booking with availability in early August from £50 and presently seven flights a day from its two current London bases.

On Tuesday and Wednesday currently flights are only offered from Gatwick. 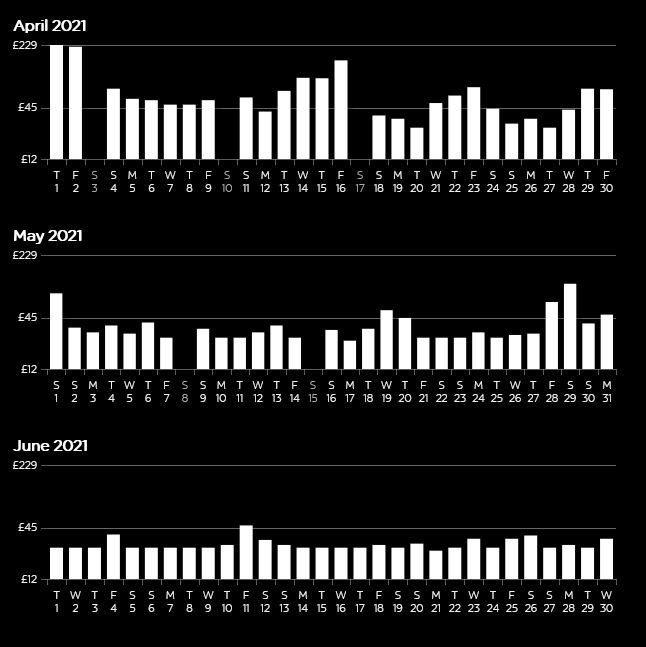