With this a cruise issue it seemed a good idea for our editor-at-large Jeff Mills to take a look at this most special of Italian cities, one linked often to waterborne holidays.  Start or finish at Venice and spend a few days there. Or at least make sure your ship overnights. 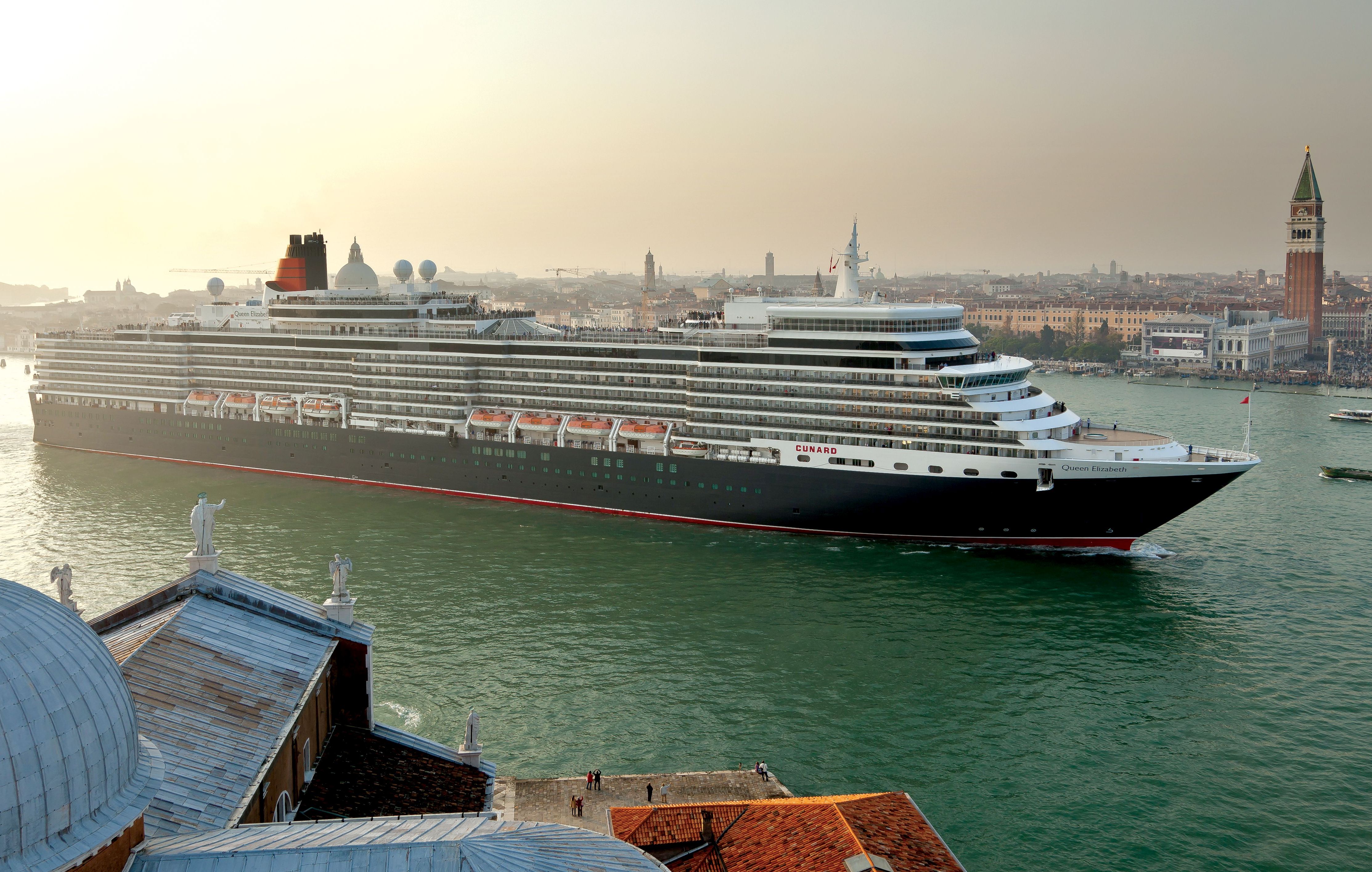 The light dancing off the water of the lagoon and the Grand Canal is magical in the way it spotlights the unmistakable landmarks on the skyline as we approach Venice in the most stylish way possible – on board a beautiful teak motor boat. If you travel to the city on board a cruise ship your arrival will be equally memorable and romantic.

It was windy out on deck as the water taxi accelerated away from the jetty at Marco Polo airport, heading for the centre of the city. But you would have to be completely lacking in imagination to choose to sit inside and miss out on this, one of the world’s most spectacular views as the faded but stunning buildings of Venice greet you, just as they have greeted those arriving by sea for centuries.

The speedboat taxi from the airport may well have cost almost as much as the flight from London, but value for money in this part of Italy is a relative thing. You can’t really put a price on an iconic journey like this.

And there can be no doubt that winter is by far and away the best time of year to visit Venice, provided, of course, you avoid the period when, in normal non-covid times, the entire city goes mad during the carnival and the price of a night in one of the city’s hotels would easily provide the down payment on a Ferrari.

But nothing, not even the eye-watering prices, can do much to damage the perfection of this wonderful city. Walking around, crossing the dozens of bridges over the canals, is not unlike being part of a painting, perhaps by Canaletto or Turner, both of whom visited and fell in love with Venice.

If you are lucky, the winter weather will be clear and bright, though perhaps on the chilly side. But be prepared, as the Venetians will be, to don your Wellington boots and paddle across San Marco if the tides and the weather decide to gang up against you.

But even when it’s flooded, the city still works quite well. Just join the locals and walk the planks which are often placed on trestles or upended buckets to keep pedestrians’ feet above the water mark. Most of the galleries and churches will still open. Venice in the gloom is not depressing; it simply looks even more romantic than usual. 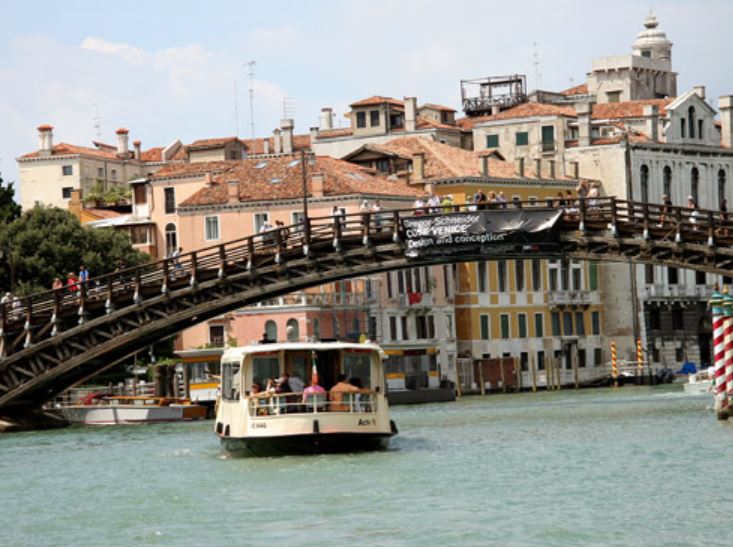 Venice is a city where getting lost can be a pleasure. It is easy to walk around the centre, the six districts or ‘Sestieri’ are barely more than a square kilometre each. And through the centre glides the Grand Canal. Take a ‘traghetti’, one of the large gondolas less lavishly adorned than those aimed mainly at tourists, which speed between the landing stages in a couple of minutes and cost just small change.

Even after uncountable works of art and treasures were looted from Venice by Napoleon at the turn of 19th century, the city remains spattered with jaw-dropping architectural, artistic and historic gems. San Marco, or St Marks, and the Doge’s Palace are still the must-sees.

Make time, too, for a trip across the lagoon by vaporetto (a sort of waterbus) to Murano and the factories making the ubiquitous glass, then on to Burano to see the individually painted fishermen’s houses and fish restaurants. 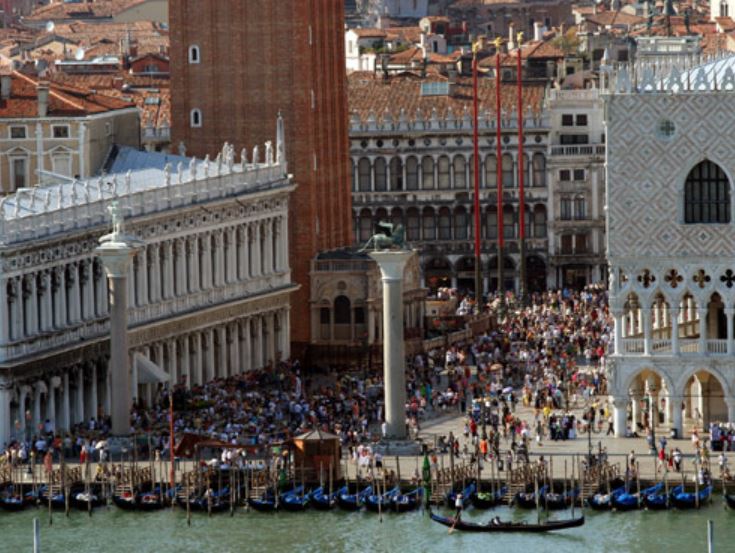 Then continue for a few minutes on the shuttle to Torcello, one of the original settlements of the lagoon, dating from the time when Venice became the more dominant settlement and people dismantled their houses brick by brick and relocated them.

There’s now is an excellent museum, a small restaurant and a 7th century church containing a fabulous mosaic of the Last Judgement.

And when it’s time to eat instead of heading back to your ship, look out for a ‘baccara’ a kind of Venetian wine-bar-cum-tapas-restaurant, originally the workers’ canteens, some of which still serve modest one-or two-course meals in informal surroundings.

The British Romantics of the early 18th century adored Venice because of its extraordinary beauty, albeit very faded beauty.

Now there are some rather more tacky aspects to the city. Cheap carnival masks, naff Murano glass, multilingual hustlers selling fake ‘designer’ handbags and pushy waiters trying to get you into their often tacky restaurants are the ugly side of the city. If it all gets too much, get out of San Marco, and let serenity flood back.

There is no escaping the fact that Venice is very expensive but you can avoid spending a fortune. Walking and sightseeing are free, of course, and buying a pass for the vaporetto is a good way to save cash.

Whether you choose to hire a gondola is up to you – you may view it as a must-do, or something only those who know no better fall for. If you decide to push the boat out, don’t expect the singing gondolier to be included in the price. Even ice-cream advertisement jingles have their price here.

If you are visiting Venice as part of a cruise then you will be all set; if you’re not the best advice is to travel cheap and spend your money on the hotel. Opt for somewhere in the centre of the city and you will be able to reach virtually everywhere by foot or boat.

Sit having lunch on a terrace overlooking the Grand Canal and allow Venice to get under your skin, just as it has to so many travellers over so many years.

As afternoon fades into early evening take a stroll along the cobbled roads to Harry’s Bar for one of its famous Bellinis, as you look forward to yet another magical night in what could well be Europe’s most idealistic city.

There is a good selection of flights from the UK to Venice with British Airways, easyJet and Ryanair all operating on the route. Perhaps the most romantic way is on the Venice Simplon-Orient Express .