Beset by problems and up to ten years late Berlin’s new airport opened with a damp squib last Saturday (31 October).

Instead of landings on parallel runways by easyJet and Lufthansa to officially inaugurate Berlin Brandenburg Airport Willy Brandt (BER) bad weather and the non-certification of the new runway meant that the planes had to landing in sequence, with easyJet first.

Speaking at a ceremony within the new Terminal 1 Mr Lundgren was clearly pleased to finally move into the new building.  EasyJet was resident in the old Schönefeld Airport, Terminal 5 and also in Berlin Tegel, which is about to close.

“As Berlin’s largest carrier we are really excited to move all of our Berlin-based operations under one roof at BER. We have a long history in the Berlin Brandenburg region, operating flights since 2004 and consistently expanding our base with over 12 million passengers flying to and from Berlin with us last year alone.

Our customers will benefit from an improved experience in Terminal 1 with easy connections between flights and rail including our new Worldwide by easyJet partner Deutsche Bahn.” 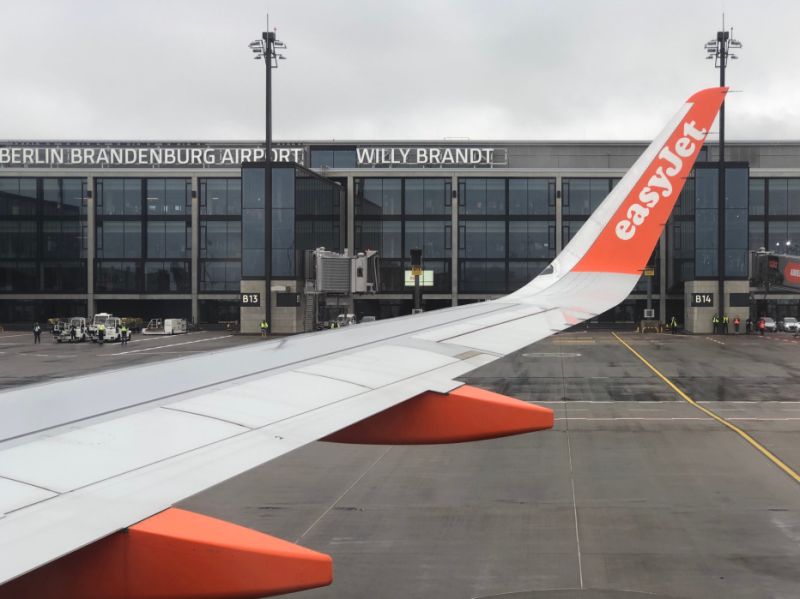 Yes, John - IATA had its AGM in Berlin in 2009, and held a big dinner event in the Tempelhof terminal building. On Friday 4 May, 2012, I and some IATA colleagues visited Brandenburg Airport and, after a meeting with its then CEO, were shown around the building. We were told it was going to open about three weeks later, but it was obvious from the state of the building that this was completely impossible. Nevertheless the management insisted to us it would happen. That weekend the news broke that there would be a short delay. And here we are......!

Reading my logbook as an ex Laker Airways BAC 1-11 skipper, I note that we were the first but unofficial flight out of the New Terminal A at TXL on Oct 30th 1974, the day before Air France's shiny new Airbus A300 arrived to open the new facilities. Up until the Nov 1st 1974, we all used the old French Air Force property on the North side of the runway. The Laker flight was fromTXL to Venice and departed at 07:30 which was too early for the press to assemble! I expect Air France may take the credit of being the last flight out of Tegel as well, now that Brandenburg is finally operational.

In 1993 AB Airlines (Air Bristol) became the first UK airline to operate into Schönefeld with a BAC 1-11 as I recall. The airport security and immigration were clearly ex East German Stasi, and the run into the new German capital in a Wartburg taxi could be best described as ‘interesting’. AB was the original British Low-Cost airline but was destined to die young.

Tempelhof I am pretty certain also featured in Indiana Jones and the Last Crusade.

Unless my memory is playing tricks I seem to think IATA had a party at Tempelhof when the airlines gathered for the AGM in fairly recent times.

I recall Berlin Tempelhof and flew in there from London City Airport on a scheduled flight. Wonderful structure which should have been retained until at least now.