Wizz at the Aviation Club

Joseph Váradi, CEO of Wizz Air, something of an Anglophile, was in a bullish mood for a Webinar organised by the Aviation Club of the United Kingdom last Wednesday.  The talk replaced October’s traditional lunch which would have been hosted at the Royal Automobile Club. 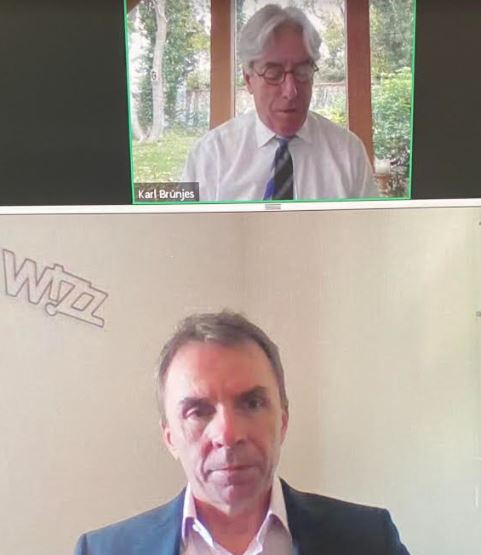 Váradi said Wizz had been “waiting for a crisis” to emerge since the financial crash of 2008/9, given the role of recessions in shaking out weaker players.

“Of course we didn’t know it would be Covid,” he noted “but we knew any crisis would be an opportunity… It sorts winners from losers.”

He said Wizz had launched more than 200 new routes in the past five months, and opened 12 bases.  This week saw the introduction of four new destinations from  Gatwick, the airline now operating 132 routes to 73 destinations from 11 UK airports.  Whilst most of the routes have only basic frequencies this policy seems to work well giving the airline considerable exposure.  It is listed on the London Stock Exchange and its UK (Jersey) registered operation is a member of Airlines UK.

Wizz Air Abu Dhabi, a joint venture between the Hungarian budget airline and Abu Dhabi state holding company ADQ, has received an air operator certificate, though its launch has been hampered by a coronavirus ban on foreign visitors.  No date has been given for the maiden flights with the airline only showing bookings to a variety of destinations from 1 December.