Forget your woes if you are into motoring.

On a glorious day last Tuesday, the motoring and upmarket press were invited to a preview of the 15th Salon Privé at Blenheim Palace. 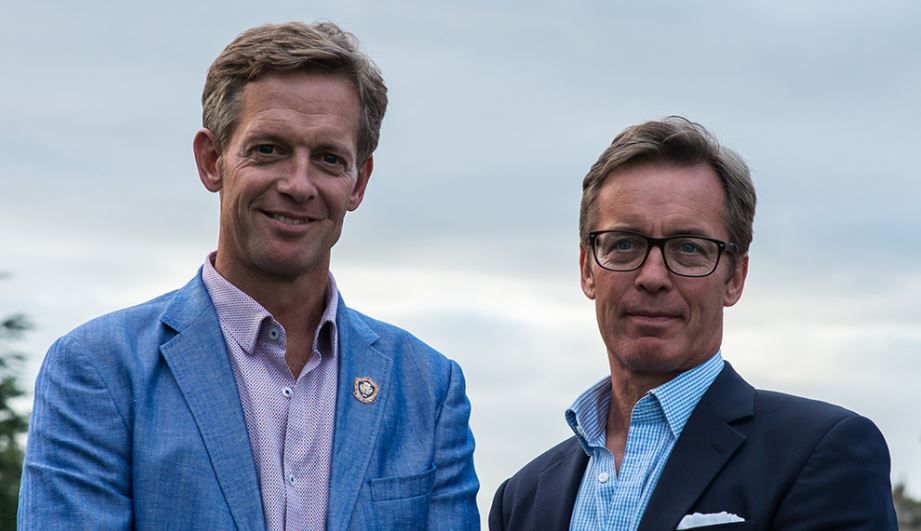 First introduced by the brothers Andrew and David Bagley as an inspiring Concours d’Elégance at the Hurlingham Club in 2006, the event has expanded and expanded, moving after five years to Syon Park near Heathrow, and since 2016 in the magnificent grounds of Blenheim Palace, the land given by a grateful nation to the first Duke of Marlborough in 1704. Charles James Spencer-Churchill, the 12th Duke, was patron and host of the ensemble. It is a unique and exclusive gathering of the world’s most exclusive automotive brands and sold out at £286 per person Wednesday through Saturday last week.

The organising, the presentations and the catering were superb.  Who would have guessed the country (and the world) was in the middle of a Covid-19 pandemic crisis.  The event was however very aware of what was going on around and all the medical precautions were strictly adhered to.

The day was spectacular with World Premières from Bentley, Engler, Touring Superleggera and Zenvo.  Plus a UK first for the 2020 Rolls-Royce Silver Ghost.

On display was the Lotus Evija – the first all-electric British hypercar.

A technical tour de force, the Evija is illustrative of the innovative thinking and ingenuity that has always been part of the Lotus DNA.  Colin Chapman would have been proud of the car, lightweight, four-wheel drive and powered individually in each wheel.  The power-driven doors swing up parallel with the body line making it particularly easy to park in a tight space.

The Evija has been designed and engineered in Great Britain. Production will begin in late 2021 in a new factory in Hethel, the Norfolk home of Lotus since 1966.  Now majority-owned by Chinese multinational Geely since 2017 (who also purchased Volvo back in 2010) the smooth looking Evija is a bold statement of intent of the brand’s future ambition to be a truly global performance car company.

Salon Privé started as a Concours and the tradition carries with a collection including some of the rarest and astonishingly beautiful cars ever seen, as well as rare classic cars from around the globe. This year, a record 93 entries were presented, comprising 77 motorcars and 16 motorbikes across 17 different classes. Every major automotive super brand was represented with models on display spanning more than 100 years from the 1904 Napier to the 2020 McLaren Senna GTR LM.

One of only three surviving Henri Chapron-bodied Citroën Le Paris won the Post-War Touring (closed, four-seater) class. The Gallic beauty – which was presented at Blenheim Palace fresh out of restoration – was originally displayed at the 1960 Geneva Salon and is unique in that it was the only Le Paris to use the ID platform rather than the DS.  Against the exotica perhaps it looks mundane but the DS heritage is plain to see.

The latest Ghost replaces the most successful product in the 116-year history of Rolls-Royce and reflects the company’s ‘Post Opulent’ design philosophy – as well as Sir Henry Royce’s timeless edict to ‘Take the best that exists and make it better’. Only the famous Rolls-Royce emblem Spirit of Ecstasy and the umbrellas were carried over from the previous Ghost. Everything else has been crafted and engineered from the ground up.

Based around a rigid aluminium spaceframe, the luxurious saloon features an effortlessly powerful 6.75-litre twin-turbo V12 engine and incorporates all-wheel drive and all-wheel steering. The redesigned Planar suspension system provides the marque’s fabled ‘magic carpet’ ride and works in tandem with the Flagbearer system, which uses cameras to read the surface ahead so that the Ghost can anticipate and react to even the most demanding roads. The driving experience is further enhanced by the Satellite Aided Transmission, which uses GPS data to pre-select the optimum gear for the corner ahead.  All a bit mind-boggling for the chauffeur or spirited owner. 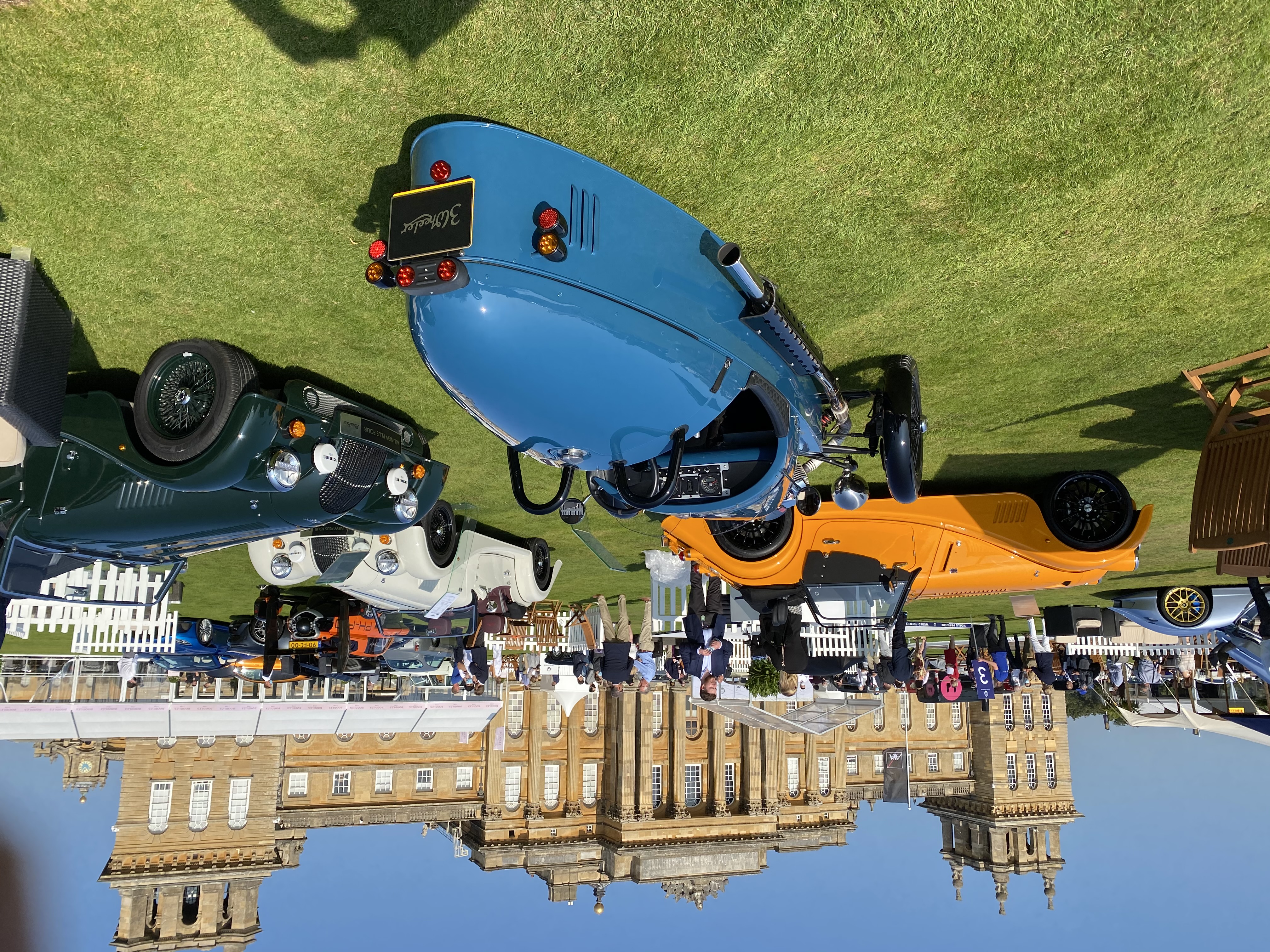 One-time part of the family but now a rival, Bentley hosted a trio of global premières courtesy of its in-house bespoke and personal commissioning division – Bentley Mulliner. All three of its portfolios were represented together for the first time ever at Salon Privé. The Classic division unveiled the stunning result of its 12-month restoration of Bentley’s own ‘Blower’, while the Coachbuilt division gave its first car – the Bentley Mulliner Bacalar – its public debut. Just 12 examples of this striking, limited-edition model will be hand-built according to the individual customer’s personal tastes.

The third branch of the business – Bentley Mulliner Collections – offers customers pinnacle luxury derivatives of the core Bentley range, and its brand-new Continental GT Mulliner coupé made its global debut at Salon Privé. Exclusive features included a bespoke hand-crafted interior and a unique Double Diamond front grille, and it will be available to order from October, with deliveries starting early in 2021. 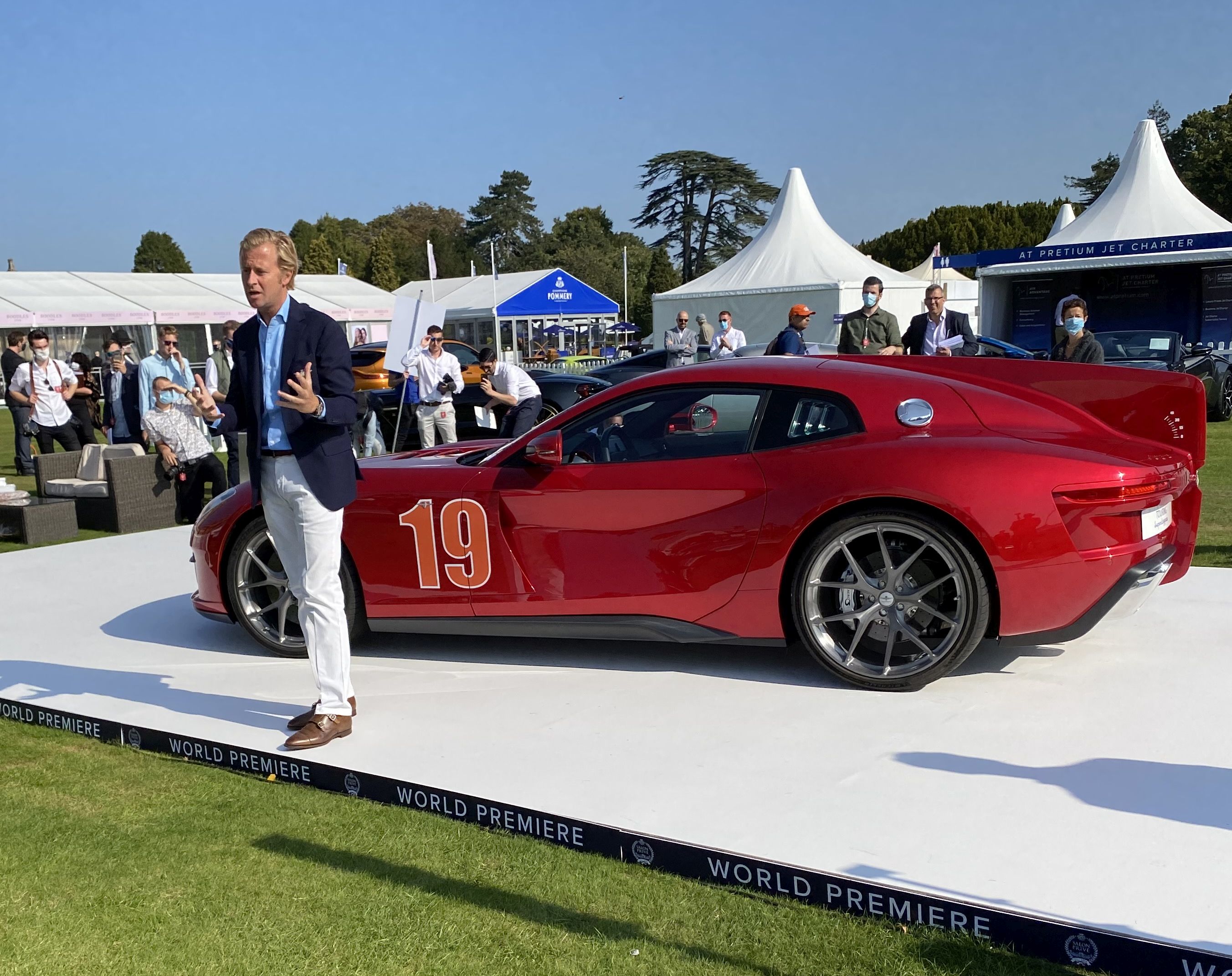 Legendary Italian styling house Touring Superleggera also gave a new design its world debut. The Aero3 is the third streamliner model in Touring’s recent line-up after the highly successful Disco Volante and Disco Volante Spyder, but the overall shape and construction are new. Drawing inspiration from the Touring-bodied Alfa 8C 2900 Le Mans Berlinetta, it is powered by a 6262cc V12 engine and only 15 will be built – each one to the customer’s personal instructions.

Usually Grand Prix racing as road cars are led by Ferrari, Lotus and McLaren.  For 2020 they were joined by a Brabham BT62 as the company marked its second birthday. Brabham Automotive was introduced to the world on 2 May 2018, with the launch of the Brabham BT62 at Australia House, London.

Motorcycles are very much the vogue, but only for certain individuals.  A new British company, Landen, broke cover at Blenheim with their eagerly-awaited introductory model, the Two Stroke.  The display replica can only be described as fabulous. It defies convention by using the latest two-stroke, 250cc, V-twin engine and will attack the senses through the sound, smell and sheer thrill that only a lightweight, two-stroke can deliver. And its redline? How does 14,500rpm sound! 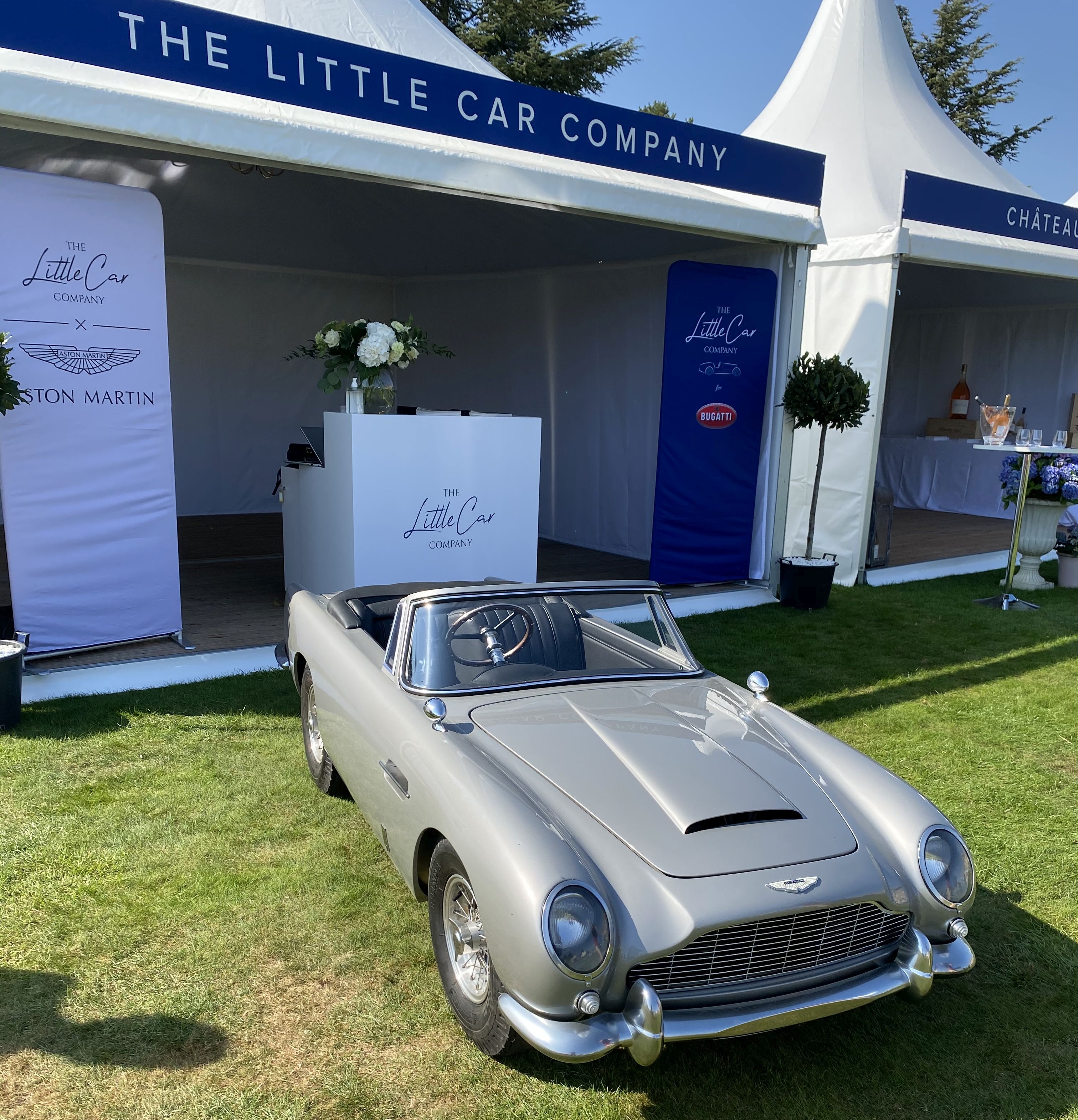 The Langen Two Stroke is a handmade, bespoke creation. The chassis is made by hand from large-diameter, laser cut aluminium tubing, with bonded and machined connection points. Light, Ohlins front forks and British K-Tech rear shocks control the nimble machine. The bodywork, including the fuel tank, is made from hand-laid carbon fibre, as is the gold leaf detailing.  The Langen has been designed, engineered and built in Wigan, Greater Manchester.

Salon Privé is what it is.  Extravagant and outlandish.  You can buy a helicopter (or fly in – some did). Fairline Yachts had a stand. Ladies’ Day (Thursday) was a bit murky but the Boodles Best Hat competition whilst not in the same league in terms of numbers as Royal Ascot, in quality was at least equal.

All guests at Salon Privé were VIP (including the press), catering partners Absolute Taste making sure nobody went without food, drinks and Pommery Champagne always available.  This was a Covid-19 event to remember.

See also AND FINALLY in this week's BTN. 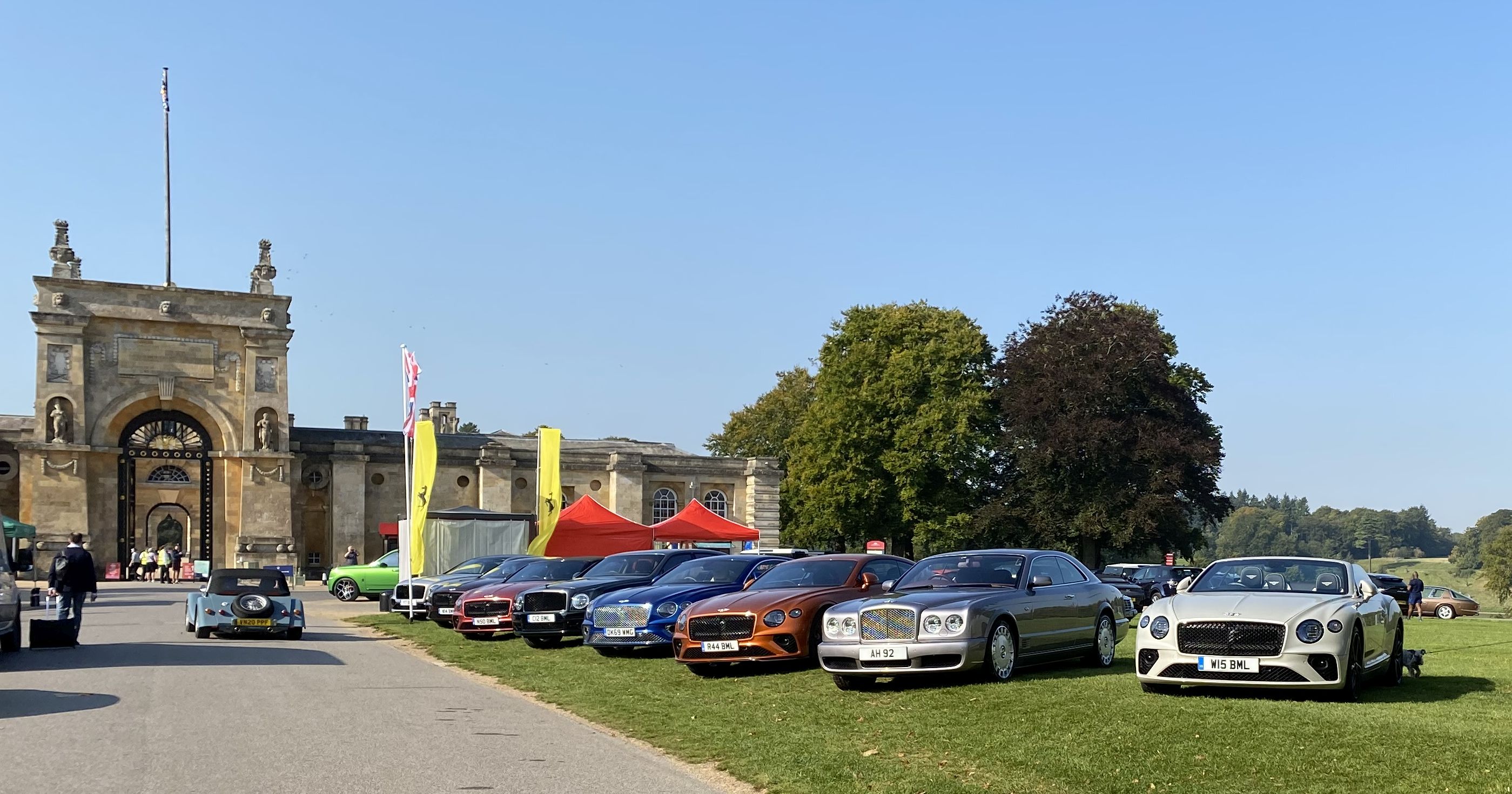 Certainly one of the great events of the classic car calendar and in this strange year, an example of how to organise a large public gathering in a safe and COVID compliant manner utilising a bespoke app. Just a shame that next year the event is once again scheduled to clash with Concours of Elegance at Hampton Court, thus reinstating the intense rivalry between these two top drawer events. It’s a difficult choice...