"Blanket quarantine – Not fit for purpose!" she says. 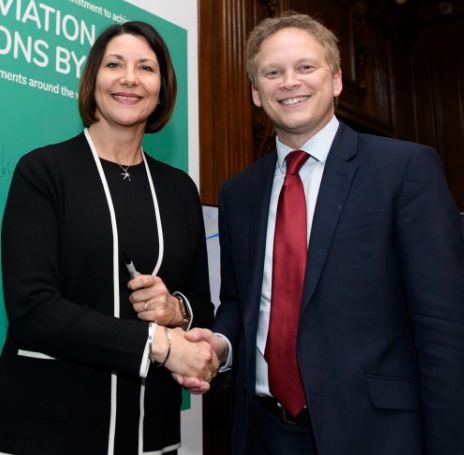 Seen in happier times with Transport Minister Grant Shapps, Karen Dee, Chief Executive of the Airport Operators Association, makes a plea for the Balearic and Canary Islands, at least, to have the quarantine restrictions lifted. "Lanzarote, which as well as having low infection rates, is over 600mi from the Iberian Peninsula." It is a fair point.

"At this time of year, our airports are normally full, with the summer holiday season in full swing. This year, like in many other ways, will be very different. Despite the valiant efforts of airports, airlines and travel companies passenger numbers remain low and our industry remains in a very precarious situation.

Nobody within UK aviation will dispute the need for public health measures to remain the Government’s number one priority or for the Government to remain vigilant about a potential second wave. But the re-introduction of blanket quarantine measures – like those introduced recently covering the Balearic and Canary Islands in addition to mainland Spain – is the wrong approach and risks further damaging the fragile re-start of the aviation sector.

Last August, over two million people flew to the Spanish Islands, with these destinations making up 15% of all flights and 27% of flights outside of London. For some airports the proportion is even higher. These islands demonstrate that a blanket quarantine policy is not fit for purpose with the clearest example being the inclusion of Lanzarote, which as well as having low infection rates, is over 600mi from the Iberian Peninsula.

The Government must look urgently at a more nuanced risk-based approach which includes regional travel corridors allowing safe travel to areas with low infections, whilst also protecting against a potential second wave. It must also include working with airports to find broader solutions, such as testing, which could boost passenger confidence and further ensure safety while flying.

The Government acted with urgency to re-introduce quarantine measures for Spain based on public health concerns, but we need to see the same sense of urgency given to supporting the aviation sector, which continues to receive less support than others. One of the clearest examples of this is business rates, with airports in England paying over £70 million between March and June even when passenger numbers fell by around 97%. That Governments in Scotland and Northern Ireland have granted business rates relief is exceptionally welcome and reinforces the urgent need for relief for English and Welsh airports.

With passenger numbers not predicted to return to pre-COVID levels before 2023 at the earliest, we face a very long and dangerous road to recovery. That’s why it is high time that the Government starts listening and agrees a sector specific support package that begins with an immediate introduction of regional travel corridors that can save summer holidays.

This package must also include a twelve-month deferral of business rates relief, action on APD, Government funding for CAA’s 2020/21 charging period and crucially longer-term employment support to protect jobs once the Job Retention Scheme has been removed.  Airports have done everything in their power to weather the storm and have done so without the specific Government support afforded to other sectors. It is time for the Government to finally grasp the severity of the challenge and threat that the pandemic poses to the sector and work with us to kickstart our long road to recovery."