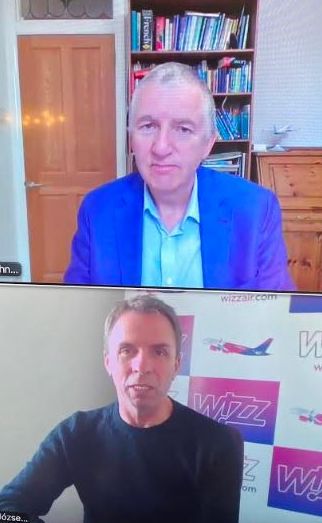 The Covid-19 crisis has created a bleak outlook for the airline industry but Wizz is bucking the trend.  John Strickland explored the reasons behind this in a fascinating live webinar with CEO Jozsef Varadi for the World Aviation Festival, now set for late September at ExCel London.

Varadi founded Wizz in Hungary 16 years ago and now leads a pan European business with over 120 Airbus aircraft and flying over 40m customers.  Profits for 2019 will be announced this week and will top €300m, with the Covid-19 crisis only touching the tail end of the reporting position.

Varadi’s maxim is “cash is king”.  Wizz sits in an enviable position of having sufficient cash and liquidity to survive for two years without operating a single flight, leaving it in prime position to exploit others weakness.

Added to this, the airline has a massive order book, with its fleet growing to almost 300 aircraft by 2026-27.  The majority will be A321 NEOs, including longer range (LR and XLR) versions, which afford Wizz an opportunity to expand its horizons beyond Europe. Varadi has no intention of cancelling any of his order book.  The airline has in the last few days, announced four new European bases, which will commence operations in a matter of weeks.

Following this Wizz will open a new Joint Venture in Abu Dhabi later in the summer, representing a radically different departure and opening up many new markets.  Up to 50 aircraft will be allocated to this. Currently Wizz serves Dubai from several European bases but these will transfer to Abu Dhabi as the first services ahead of the start of based operations.

Cash reserves and a massive forward aircraft portfolio gives Varadi quiet confidence, but so too does Wizz’s young customer profile and lack of reliance on business passengers.  Varadi said that the airline’s data shows clear evidence of a real hunger to get travelling again and he believes that with the sanitary measures which the airline is taking, people will soon be able to do this with confidence.  His only frustration is the disjointed way which governments are behaving with respect to the opening of borders and quarantine requirements.  No uniform approach.  Where is the EU he asked?

Strickland made one point very clear.  It certainly looks like Wizz will be a winner in the years ahead.

Wow, or Wizz, an airline with a huge cash pile and gloating on an enormous order book for new aircraft. Er .... am I missing something here?