ON TOUR: The business flyers get together

Just before all hell broke loose, the BBGA (British Business and General Aviation Association) and the UK CAA came together to discuss the big issues impacting on executive aviation. Alison Chambers, a BBGA board member reports. 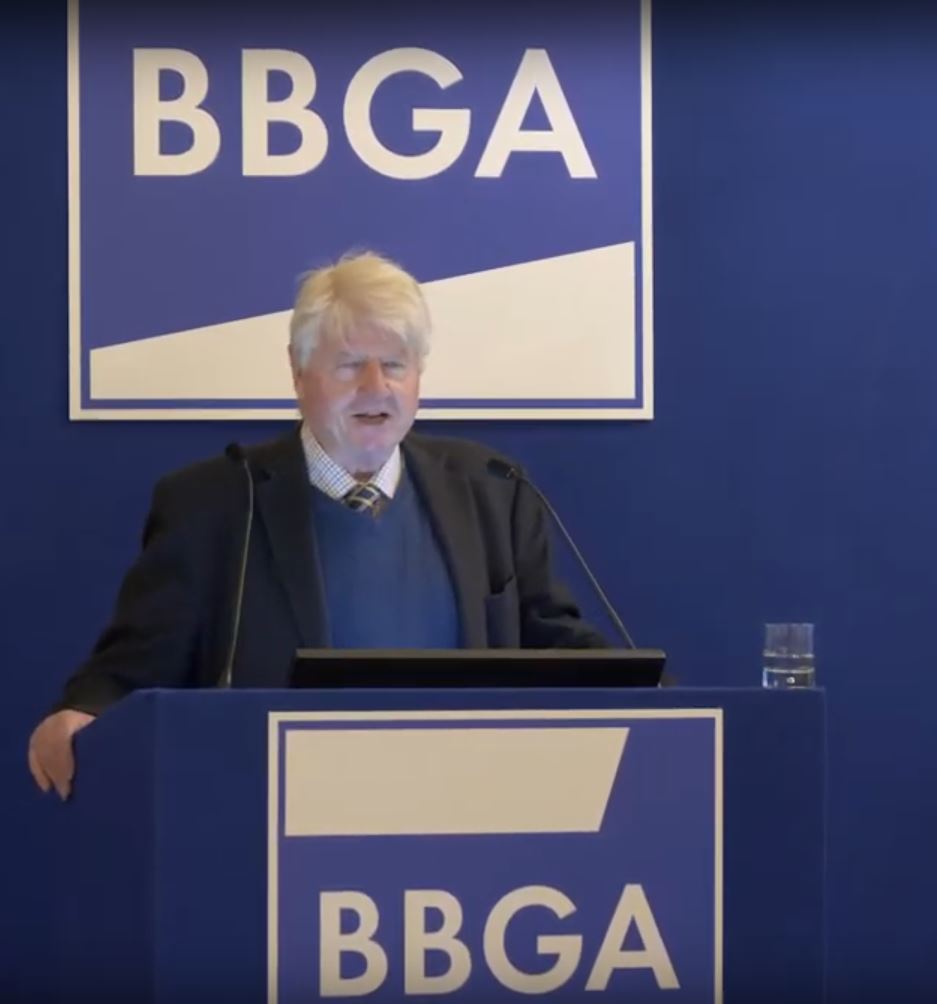 On 5 March we sat in the grand Churchill Room of Luton Hoo Mansion House listening to the UK CAA’s head of airline licensing and consumer issues David Kendrick on what he hoped would be a positive outcome for aviation following Britain’s decision to Brexit.

That previous evening, word came that Flybe was on the verge of collapse, its fate confirmed in the early hours. The arrival of Coronavirus and reduced travel demand had pushed the 40-year old regional airline, let down by its new investors, and already in a precarious situation – over the edge.   This was the setting for the BBGA’s annual meeting, now defined as the last sizeable gathering in aviation as COVID-19 has since changed life as we know it.

A few international delegates chose to stay away, but the 140-strong turnout showed their resilience. Over 90 aviation shows and conferences have been cancelled or postponed since, including EBACE.

BBGA chair, Aoife O’Sullivan, opened the event declaring it was a no kissing, no hand-shaking, no business card-sharing conference.

Keynote speaker Stanley Johnson, environmentalist, author, former European politician – the PM’s Dad – shared his love of aviation flying DHC Chipmunks with the Oxford University Air Squadron, until an eyesight issue grounded him. “I am on your side,” he said, highlighting the economic benefits business aviation provides and the multiplier effect it brings to inward investment.

His words turned out to be a rallying call for the day. 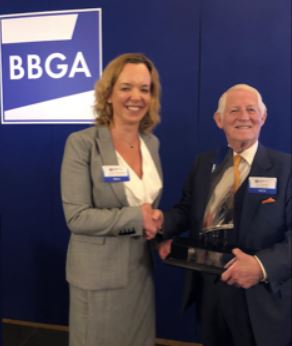 Every passenger flying on private charter generates nine times the GDP of an airline passenger, highlighted Dave Edwards, CEO of The Air Charter Association (ACA) and we need to shout louder about our value.

Mr Johnson praised the work ongoing at Cranfield on new aircraft technologies, towards electrification and industry initiatives all tackling the climate.

These are sectors we need to embrace, said Martin Robinson, CEO of AOPA UK.  This new technology will drive sustainability, although unmanned air vehicles will certainly impact on aviation training.  We will also see challenges where the aviation world interacts with drones – aviation being the visible part, we heard. The GA fraternity is wise to work with the newcomers – Uber, Bell, Boeing, Airbus, he said, as this new era approaches. GA is pretty much reliant on funding from owners’ pockets and it has always been that way. Now we have big players coming in to our world.

Protecting the environment is the biggest issue facing our industry, said Aoife O’Sullivan, introducing a session on sustainable aviation fuel with Tom Parsons, low carbon commercial development manager at Air BP, Bryan Stonehouse, global aviation biofuels and carbon manager at Shell Aviation and EBAA’s Bruce Parry, senior manager, environment.  Delegates heard that business aviation accounts for 7% of movements and just 0.04% of aviation’s overall 2% of emissions – should we shout about that more? Airports themselves can do more to tackle emissions – electrifying the whole support infrastructure.  If we can channel the money – offset / promote SAF – and plough that back into innovation / some electrification we can make a difference in changing the perception of our industry. 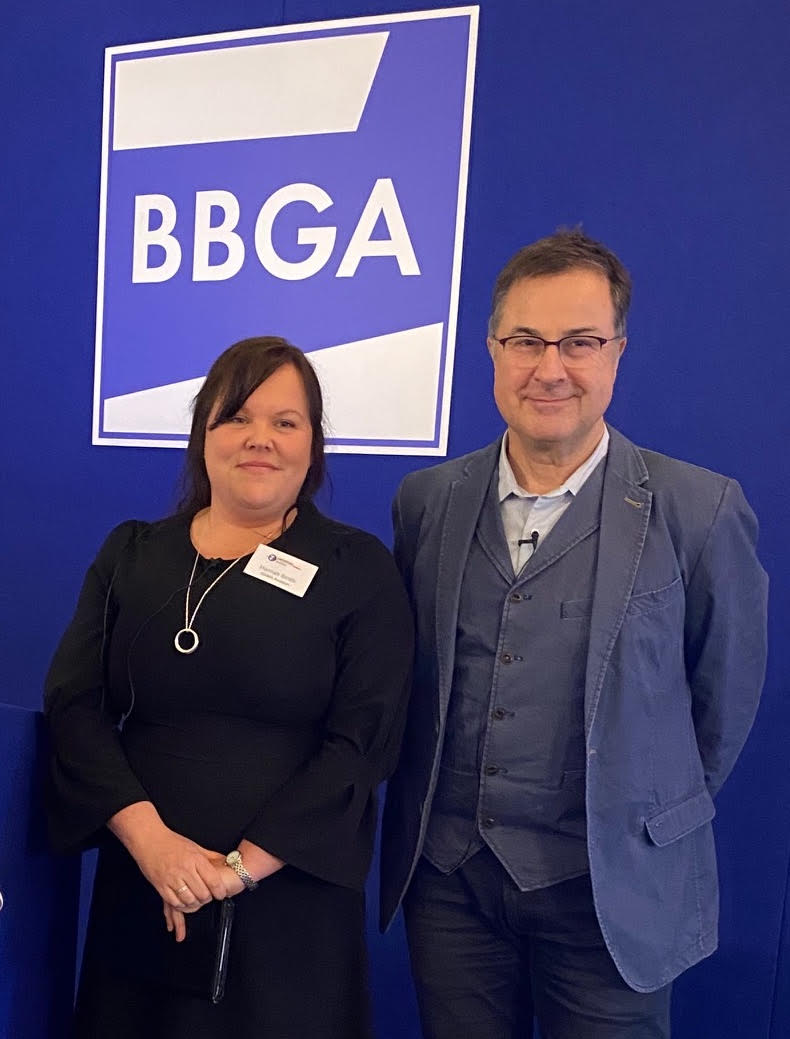 Tom Parsons said that SAF needs to be ubiquitous to meet the 2050 industry deadline. It is still in limited supply and there are only two suppliers. The Nordic countries are pioneering – Norway leading and Sweden following, he said.  While there have been terrific initiatives with EBAA and NBAA and the SAF Coalition and bizjet flights in and out of Geneva and Van Nuys, California Airports, many operators are still nervous of it.

“For each production pathway there is clear methodology, run by independent sustainability certification groups who measure all the emissions. For every delivery there is a specific greenhouse gas production score and it’s typically between 60% and 90% today. We see opportunities for that to go even higher over time as new technology comes through,” he said, adding prices are coming down (three to four times more expensive than traditional fuel) but it depends when it is manufactured and what pathway brought it in.”

The time is ripe to demonstrate our green credentials and get the message out to the new generation, because if we don’t do that, we will lose them to our exciting sector, warned Dave Edwards.

James Hardie, marketing manager at Collins Aerospace and a newly appointed BBGA Board member, suggested that associations can do more to get their message out on the environment, because environmentalists know the facts.

ACA and EBAA joined BBGA on a discussion – what constitutes a legal/commercial flight.   We are still not getting through to the public who use charter aircraft that are not on an AOC without the full knowledge, said Dave Edwards.  Athar Husain Khan, secretary general of EBAA, said no subject on the EBAA Board engenders so much passion. David Kendrick insisted the CAA had made it a priority for many years and a lot of work is being done behind the scenes.   We do not want to stifle innovation, said Kendrick (alluding to the new cost sharing platforms) – but if you have evidence that an operation is being abused – tell us. 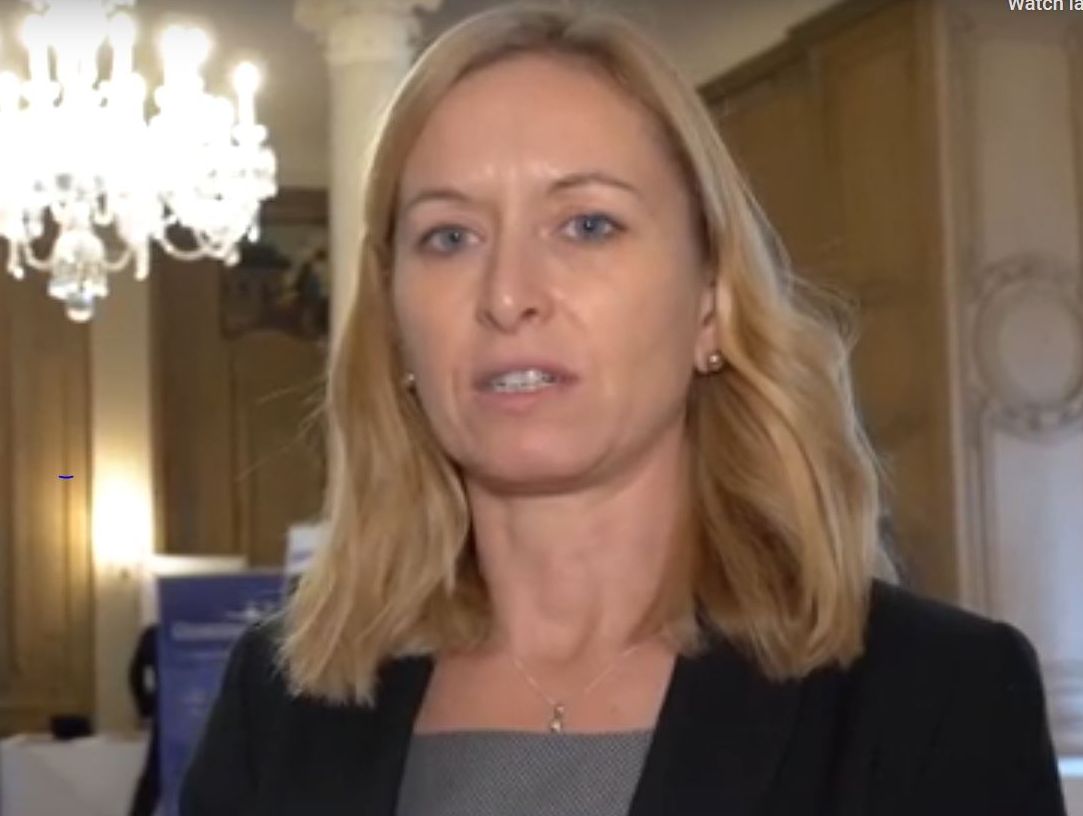 Controversially, said Edwards, the third most popular aircraft in Europe is flying on complex leases.  The basis of day hire (which involves one transaction for the pilot/the other for the aircraft.) is not illegal, but it is not a level playing field for AOC charter operators, he said.   Moreover, what is the full insurance risk?  Corporate manslaughter should scare aircraft owners, said Aoife O’Sullivan speaking as Partner of The Air Law Firm, suggesting AOC operated aircraft could have a plate on their door like a licensed London taxi.  This idea was well received.

David Kendrick MBE of the CAA  joined a round table with media to discuss Brexit, and said that the Government we have today is very different from that we had 12/18 months ago and we have just opened the door on these conversations.

The CAA supports EASA through a support contract, directly supplying its own staff and contributing to working groups. We are a very large aviation market.  We are imaginative with dynamic industries.  The British are respected for that and we have never lost the capability to do things – we don’t need to rebuild the capacity, but we might need to beef up, he said.  (Salient words as on 7 March the Government announced we will leave EASA). 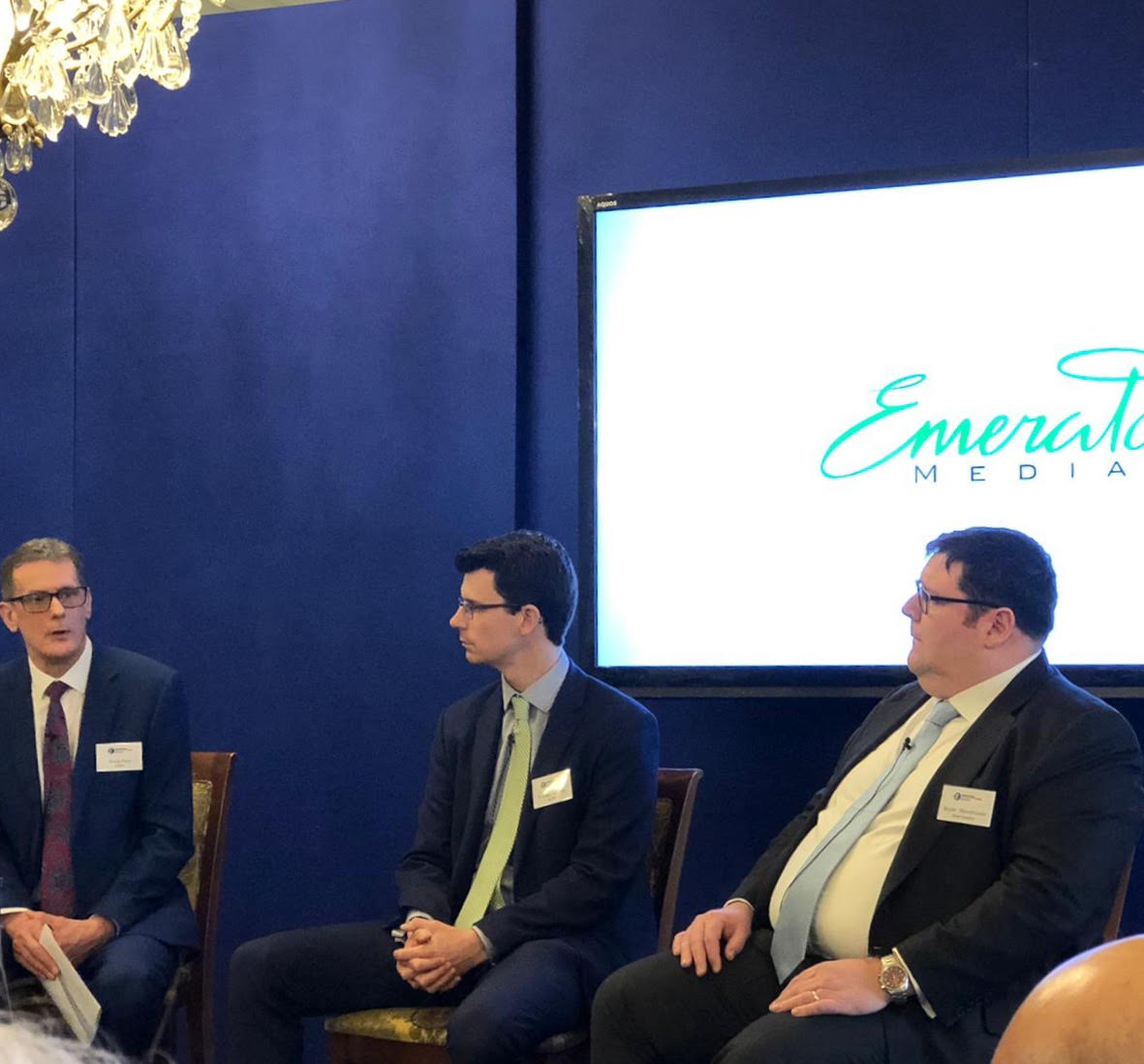 Alex Durand, CEO of Saxon Air, highlighted issues around the ability for UK-headquartered charter providers to continue to perate internal flights within Europe; and achieving reciprocal recognition of safety and other certifications.

David Kendrick is optimistic the CAA will be able to offer effective and sufficient support to the sector from 1 January 2021 onwards but processes will take time to bed down, and during the initial phase businesses will have frictions to overcome.

While COVID-19 has heralded a boom time for the sector getting people out to their second homes, operators have had to put duty of care to employees/flight crew foremost. There is a whole raft of mitigation planning involved now. Making sure our assets and our clients’ assets are managed well is important, but we also have duty of care to our workers and colleagues,” said Hannah Smith.

Dr Braida fielded a lot of questions including that face masks should only be for health care professionals or the sick and the only effective ones are expensive N95 or FF3 standard ones, which have to be safety dipped after four to six hours’ use.  Most people he has seen are not using the masks appropriately.

“We were so pleased to be able to deliver this event for our members, from hereon in we are communicating over the internet,” said BBGA CEO Marc Bailey.  It is more important than ever for industry associations to keep working together, especially as the UK and many other European countries are now in lockdown.  BBGA is keeping its app live to update members and providing news updates on its website. 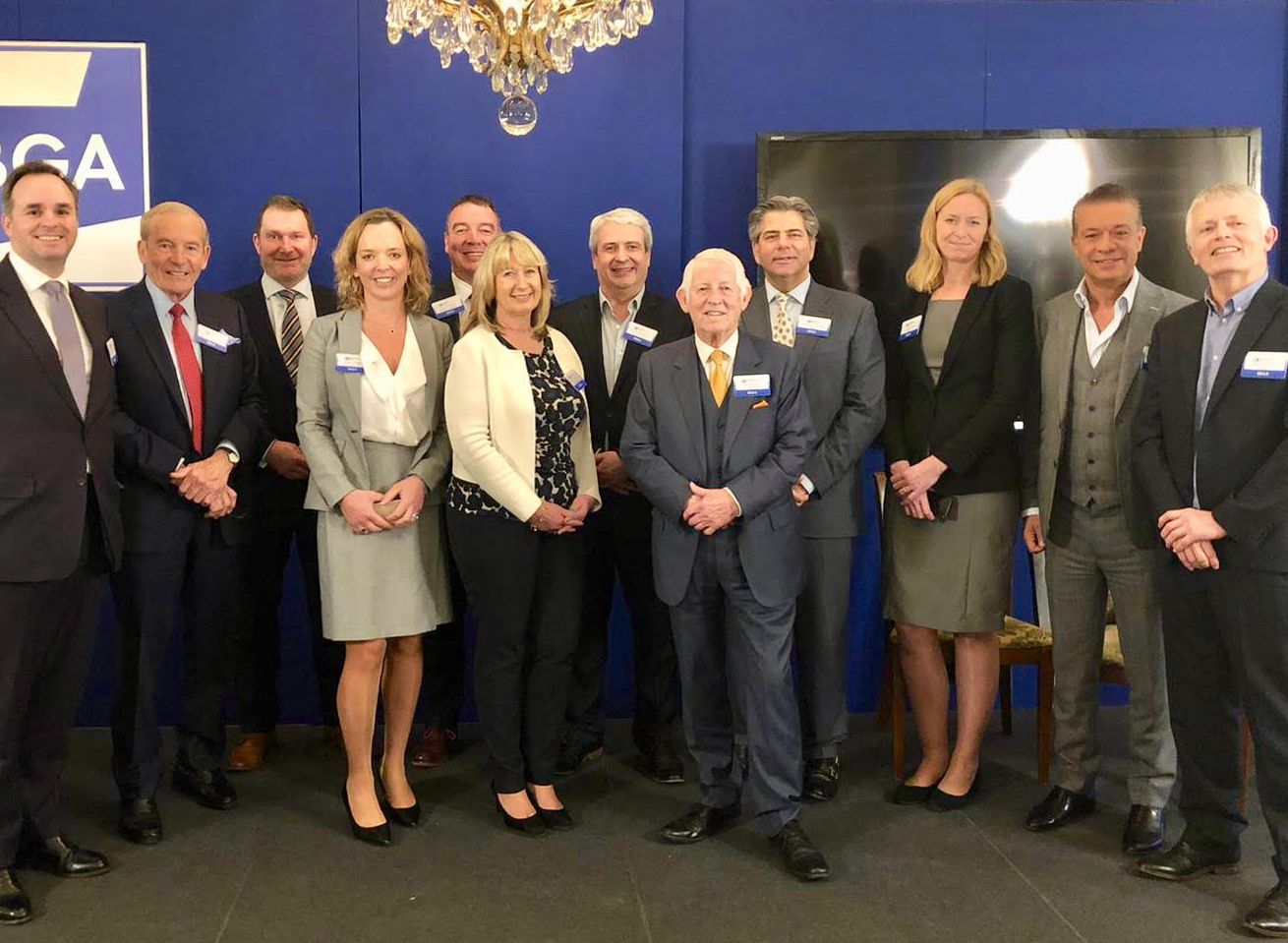