Neil Garwood was appointed managing director of Southampton Airport in June 2018, the previous incumbent deploying to the much larger Bristol Airport. He joined in October 2010 from the rail freight sector and in March 2016 took on the role of head of operations with responsibility for all operational activities across the airport including security, airfield, customer experience and the fire service. 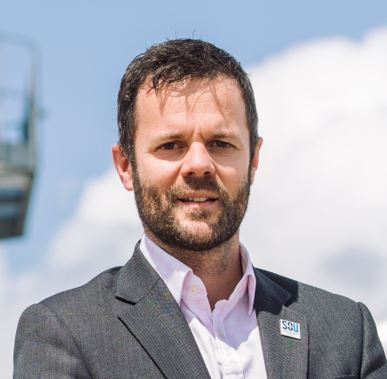 “At 10pm a week ago Thursday, the 5th March, I finally put my head down to grab some sleep knowing I’d be up again a few short hours later. But my phone kept on ringing. The CAA; council leader; local MP; my team; Swissport; my team again. Flybe was on the brink. It wouldn’t be long now. The last aircraft were due to touch down shortly and the story had broken in the media now, with most of the facts as I knew them fully out there in the public domain.

Truth be told, the endgame started in January 2019 with Flybe’s near-collapse. The Connect Airways consortium swooped to the rescue, but the positivity lasted only so long; we had the postponed Virgin re-brand, swingeing cuts to capacity and, by January, the very public news Flybe was seeking government support to stay alive.

When the loan failed to materialise, the airline's fate seemed sealed – a demand slump caused by the threat of COVID-19 and shareholders whose focus was now on other things finally pushing Flybe into administration. And with it, 2,500 jobs lost, plus many more in the supply chain as airports and other aviation companies struggle with the loss of a regional carrier that flew more than 9m passengers in 2018.

While the coronavirus may have been the final straw, with the impact being felt even greater by parent company Virgin Atlantic, the seeds of Flybe’s demise were sown many years before. And the regime of Air Passenger Duty has done so much damage to regional aviation in the UK, Flybe’s annual bill alone topping £100m and particularly exposed due to the high proportion of domestic flights, thereby picking up the tax in both directions.

We welcome the chancellor’s announcement to review APD, and the opportunity to introduce a return leg exemption, but a review never achieved anything without leading to concrete action. Sadly, for Flybe – and before it for flybmi, for Thomas Cook, for Monarch – whatever it may lead to is too little, too late.

The industry recognises the pain of losing an airline and the damaging loss of connectivity throughout the country. Flybe was an integral part of our regions. Will this connectivity be re-established? Will capacity be there for other airlines to fill the void? What will become of the government’s much-vaunted levelling-up agenda, with infrastructure development designed to stimulate the regions likely to be held up in the courts by climate change opposition?

Within 12hr of Flybe’s collapse, we had announced Loganair and Eastern were stepping in to pick up routes to Scotland, Newcastle and Manchester. Blue Islands threw away the Flybe disguise and became Blue Islands four times a day to Jersey, one of our busiest routes. Guernsey is alive and kicking with both Blue Islands and Aurigny, which also flies to Alderney. Amsterdam, our number-one destination, is not yet up and running, but discussions are under way. More announcements will follow as airlines continue to pick up the slack.

COVID-19 still presents a temporary threat to demand, but regional connectivity is crucial, and growth will return. The cost will be high, as we witness the scaling-back of airport and supply-chain activities to match the new reality. Many airports will cut deep to survive; plans will be re-worked; capital investment will be scaled back.

But not completely, and not in all cases. Take Southampton, so exposed to the loss of Flybe that 80% of the airport’s routes were lost overnight. I was challenged that we had all our eggs in one basket. And I accepted that this was the truth. However, when your basket isn’t big enough to take larger eggs, you must work with what you have: with one of the shortest runways in the UK, the airport’s resilience was always under threat.

And our plans for extending the runway have been in play for some time, currently moving through the tortuous local planning framework. Had they come to fruition sooner, would they have prevented Flybe’s collapse? No. Would they have shielded the airport from the full brunt of the impact? Most certainly. And is our ambition still there to invest in the future of the airport to provide greater connectivity and greater resilience in the years ahead? Without a doubt.

The UK needs its network of regional airports and regional airlines. There just aren’t viable alternatives to travel easily from Belfast to Birmingham, Exeter to Guernsey, Aberdeen to Manchester; and we’ll wait decades for our rail infrastructure to be worthy of taking the strain.

Some 2,500 hard-working people lost their jobs 10 days ago and more will follow as the industry resets. Aviation faces a huge shock in the face of stuttering demand. Airport developments are being delayed by well-meaning but ultimately fruitless climate change opposition.

And in response to it all, the government will undertake a review ‘in the spring’.

Neil mentions the planning application to lengthen the runway (slightly). Southempton Council came out in opposition in December referring to a climate crisis as a reason for opposing the application. Come the collapse of Flybe and many local jobs on the line, they were screaming for the Government to do something!!

A balanced and calm response to the current hysteria. Unfortunately a once in a generation event is going to reshape aviation. Some airlines and airports will not come through as we currently recognise them, or at all.