In a major vote of confidence in the Bombardier CRJ-500, GoJet Airlines, a regional carrier operating under the United Express banner, is to expand its fleet by another 20 of the single-aisle aircraft.

The announcement follows GoJet's 10-year agreement last year to operate 54 CRJ-550s for United and will bring its total CRJ-550 fleet to 74 by 2021. The aircraft is the only two-cabin 50-seat regional model designed for passengers seeking true First Class seating.

United says it offers wi-fi, more legroom and enough space for every passenger to bring a roller bag on board and since entering service last October has “revolutionised the regional flying experience with enhancements unavailable on other regional jets”.

GoJet is operating the CRJ-550 with 10 seats in United First, 20 in Economy Plus and 20 in Economy. Other features include a self-service refreshment centre for United First passengers with an assortment of drinks and snacks.

GoJet put the aircraft into service from United's Chicago O'Hare hub in October and has now begun operating it from New York/Newark. The airline will begin operating the CRJ-550 from the Washington Dulles hub this summer, when it also expects to start taking delivery of the additional aircraft. 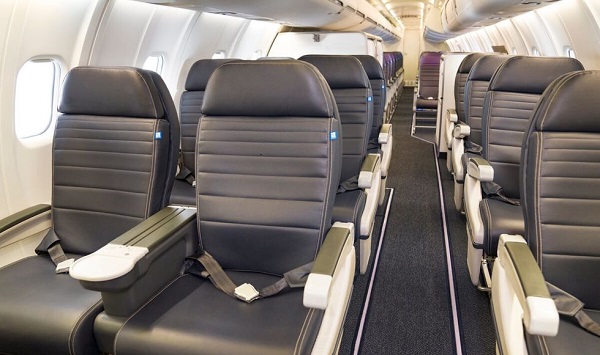