New 20mph speed limits were introduced on all Transport for London (TfL) roads in central London last week in what the organisation said was “a significant move to reduce road danger across the capital”. 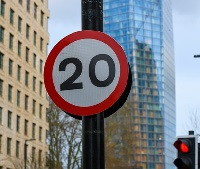 The limits are being enforced across TfL roads within the congestion charging zone, including Millbank, Victoria Embankment and Borough High Street following what TfL said was strong public support for the proposals.

New signage and road markings have been installed, plus raised pedestrian crossings in prominent locations where a high number of people walk, including near Embankment and Tower Hill Underground stations and outside Tate Britain.

To support the scheme, a speed-enforcement team is being deployed from next month in known high-risk locations for speeding, including within the 20mph zones, equipped with the newest laser video enforcement technology.

TfL says speed is a factor in around 37% of collisions in London where a person dies or is seriously injured. Figures from 2016, 2017 and 2018 show 131 people were killed in speed-related collisions on London's streets.

A further 2,256 people were reported as seriously injured in collisions where speed was recorded as a contributory factor.

Barry, Wise up - London was planned hundreds of years before DC or any other US city was even thought about. It is geographically smaller and lacks the capacity of cities like Washington, Atlanta, Dallas, LA, Boston etc. The planners of the 17 & 1800\\'s could not have envisioned the traffic volumes of today.

The reason that this has been brought in is pure and simply yet another way of raising revenue. I am surprised it has taken so long for someone to think of this. To say the Publlic supported it is most likely from a survey of one person, most likely one that uses a walking stick.

Has anybody noticed the 30mph speed limit imposed by HAL on the perimeter road at Heathrow ? Except for a couple of junctions, this is entirely unnecessary. 40mph was perfectly safe. HAL has now installed lots of speed cameras. Is this merely a scheme to boost HAL's income and help pay for the discredited third runway ?

The average speed that traffic moves in central London is 7.4mph so I'm unsure what 'capacity' is reduced by this sensible safety measure. Lets see if it cuts pollution once drivers adjust to it and dont race to the next red light?!

It's absurd that traffic should be brought to a 20mph crawl in the capital city of one of the premier cities in the world. Did nobody teach the planners that slower speeds means less capacity?