ON TOUR - The Business Travel Show

The veteran travel writer, John Burke, once again took his camera to London’s Olympia last week for the exhibition and conference that attracts a good 8,000 buyers and suppliers of travel facilities. BTN editor-in-chief Malcolm Ginsberg reported on the aviation presence. 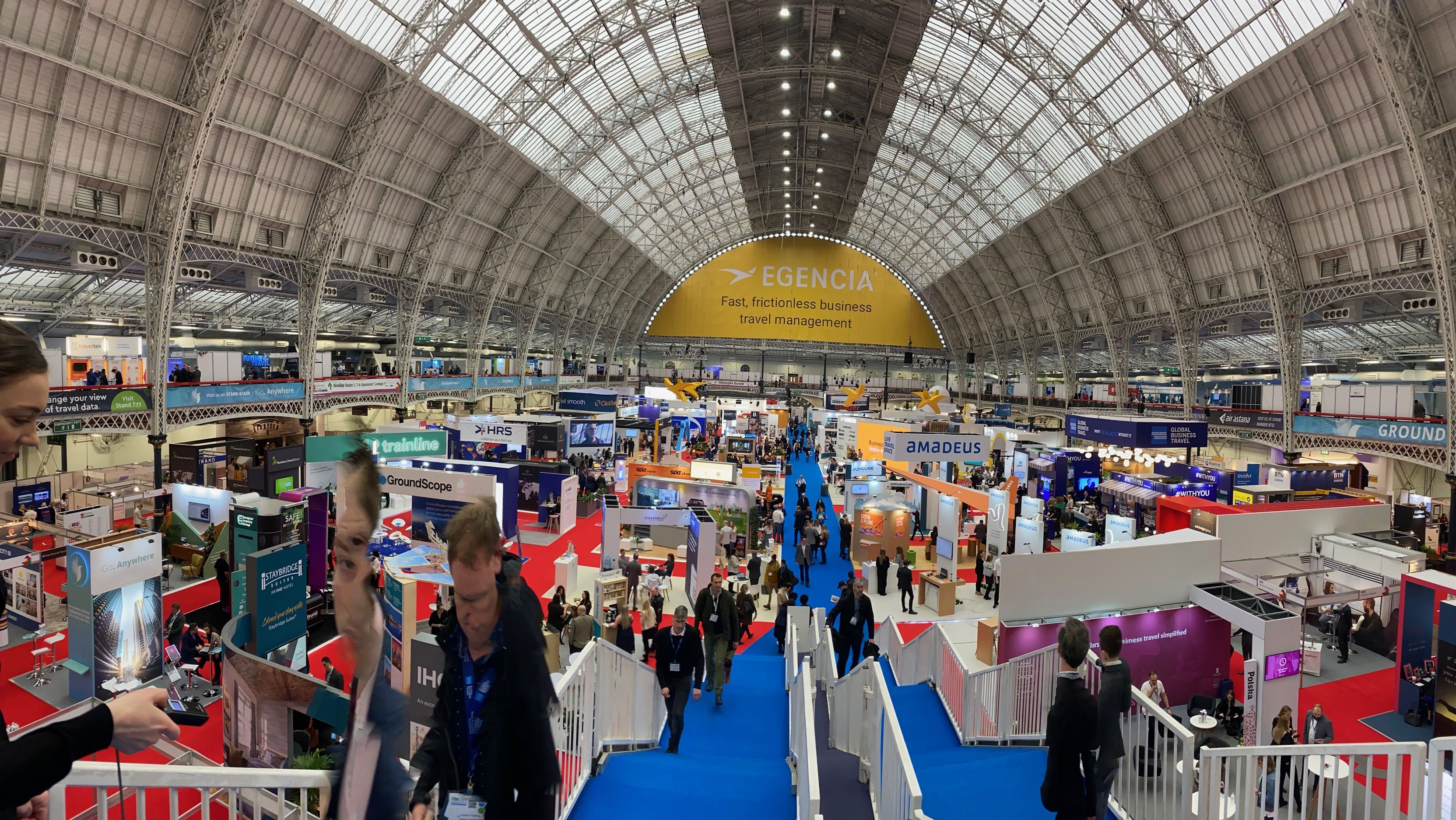 Now under the auspices of the US-based Northstar Group last week saw the final Business Travel Show (BTS) at Olympia Kensington.  For 2021 it moves to ExCel following in the successful footsteps of World Travel Market, and also for next year the World Aviation Festival.

The event is a combination of networking plus a whole series of lectures covering the whole complexity of the travel industry.

BTS now enters its second quarter of a century barely a month after Britain’s withdrawal from the European Union and amid fears of cancellation or curtailment due to the Corona virus.   Yet the two-day show filled the ground floor of the Grand Hall as usual, while the surrounding balcony was lined with 76 exhibitors at Travel Technology Europe.  These included 22 from 11 countries as far afield as Argentina and Hong Kong.

Although official figures are not yet out, show director, Rochelle Jayawardena, said: “The travel industry is very robust, so none of the suppliers or speakers withdrew.  In fact, the opening day was busier than usual, complete with 20 products launched.”

China Airlines from Taipei and BBF from Brussels were certainly there along with Transervice Limousine from Milan, but there was still considerable pessimism, especially on the airline and hotel stands, about how the potential epidemic would affect travel.  International SOS issued a leaflet on the subject, besides displaying an updated map with countries graded according to dangers.  Riskline, another among a score of security and other consultancies, issued a leaflet about the top ten risks, ranging from terrorism to uprisings, and also expanded its urban safety maps, begun two years ago, to 250 destinations. 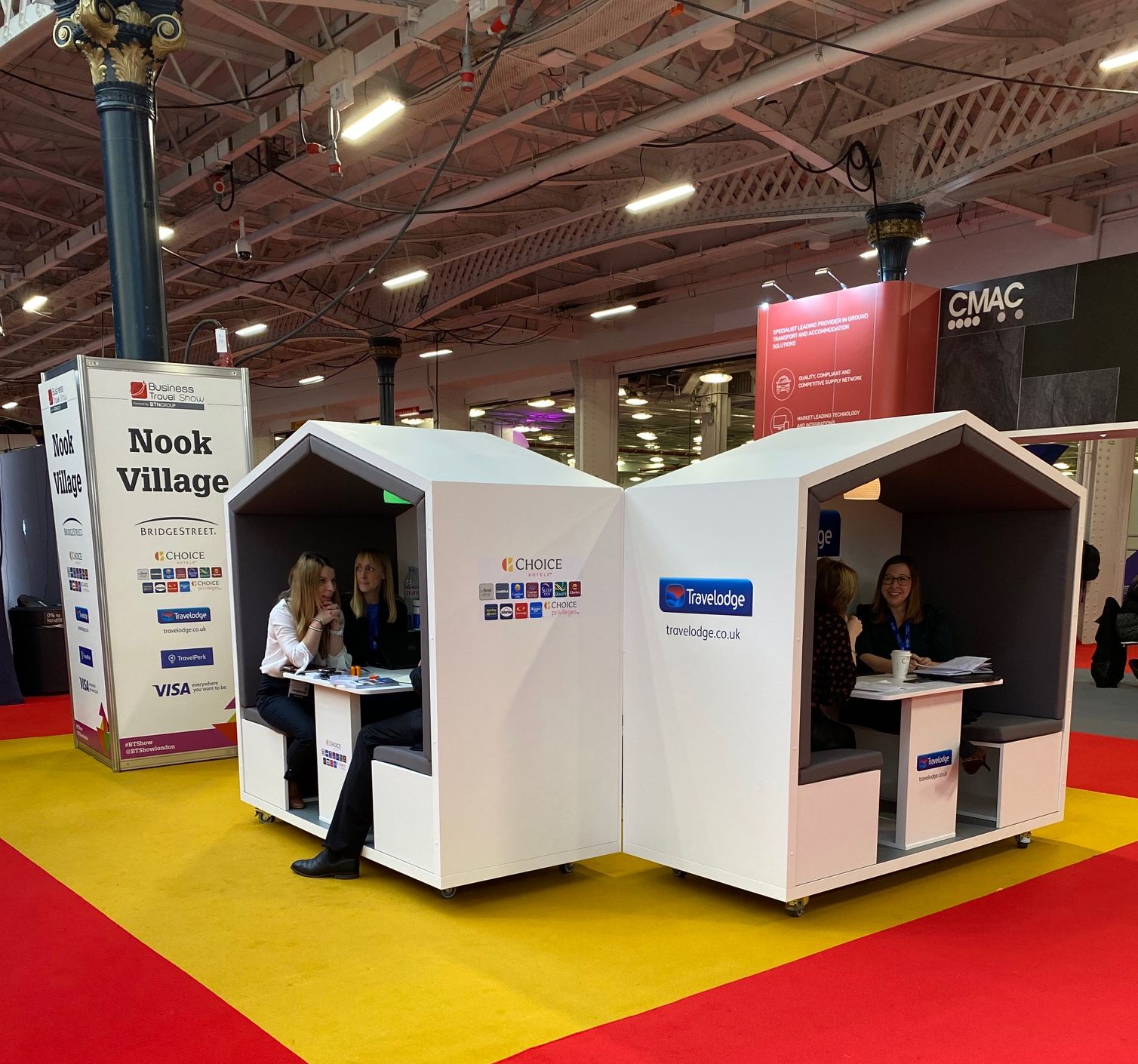 The focus on the environment was more evident than expenses in some of the products and the rolling programme of seminars involving 150 speakers who also covered the perennial concerns about savings, compliance, mobility and organization.   The biggest challenge was the regular forecast of travel trends, while the most amusing was the poacher-gamekeeper approach of two executives who had both been in supply and buying, but mindfulness and wellbeing loomed large as a topic and on 13 of the stands.  Travel & Transport management was pioneering a unique approach, but Xenzone published a report suggesting widespread malingering in the travel field.

Exhibitors were listed in 31 categories, and the grand total came to 392 although these included multiple overlapping – sixfold in the case of American Express.  It was part of the show’s largest individual contingent, over 50 companies offering travel management and allied services such as hotel bookings and venues.  Capita Travel & Events was introducing scientific data to predict what travel behaviour affects absenteeism, while a newcomer to the show, Travel Planet, was claiming a digital breakthrough that had already disrupted the French market.

Almost as numerous were exhibitors of hotel and serviced accommodation, ranging from Adina to Wyndham.   Leanne Harrad of Macdonalds Hotels & Resorts said: “Business Travel is a particularly good show for professional visitors,” while Christina Connolly of Premier Suites Plus agreed: “Being here is always worthwhile.”

Some 30 airlines were represented ‘oneworld’ operating a stand with desks for the individual carriers.  It worked well.  Star Alliance took a different approach, their major London airlines taking individual stands, but grouped together in the same area.  An ‘Airline Pavilion’ allowed some smaller carriers fine visibility without the expense of an individual stand, typically Air Astana, Ethiopian and Air Portugal.  London City Airport was also in the Pavilion.  Once again easyJet was prominent, sales manager Mark Wilkinson well pleased: “Yesterday alone we had 43 scheduled appointments,” he said on Thursday.  Flybe took a large stand.

Business Traveller magazine was only to be seen with its traditional ‘Cellars in the Sky’ wine tasting experience, without former sister company Buying Business Travel, which has rebranded.

The curio was Virgin Atlantic and partner Delta, regulars at the show over many years.  Not mentioned in the comprehensive catalogue, they were rumoured to have a private room at Olympia, and were the prominent sponsors of the hosted buyers event Wednesday evening.  No Air France or KLM at all.

Ground transport included Heathrow Express whose Frances Tuke said: “We are providing a preview of our new fleet.”   A total of nine railways exhibited, supported by Trainline and Evolvis with dedicated booking tools.  A score of stands featured taxis, rented cars and chauffeurs as well as management of ground transport. iGo of Manchester reported that 73% of business travellers want control over taxi bookings. 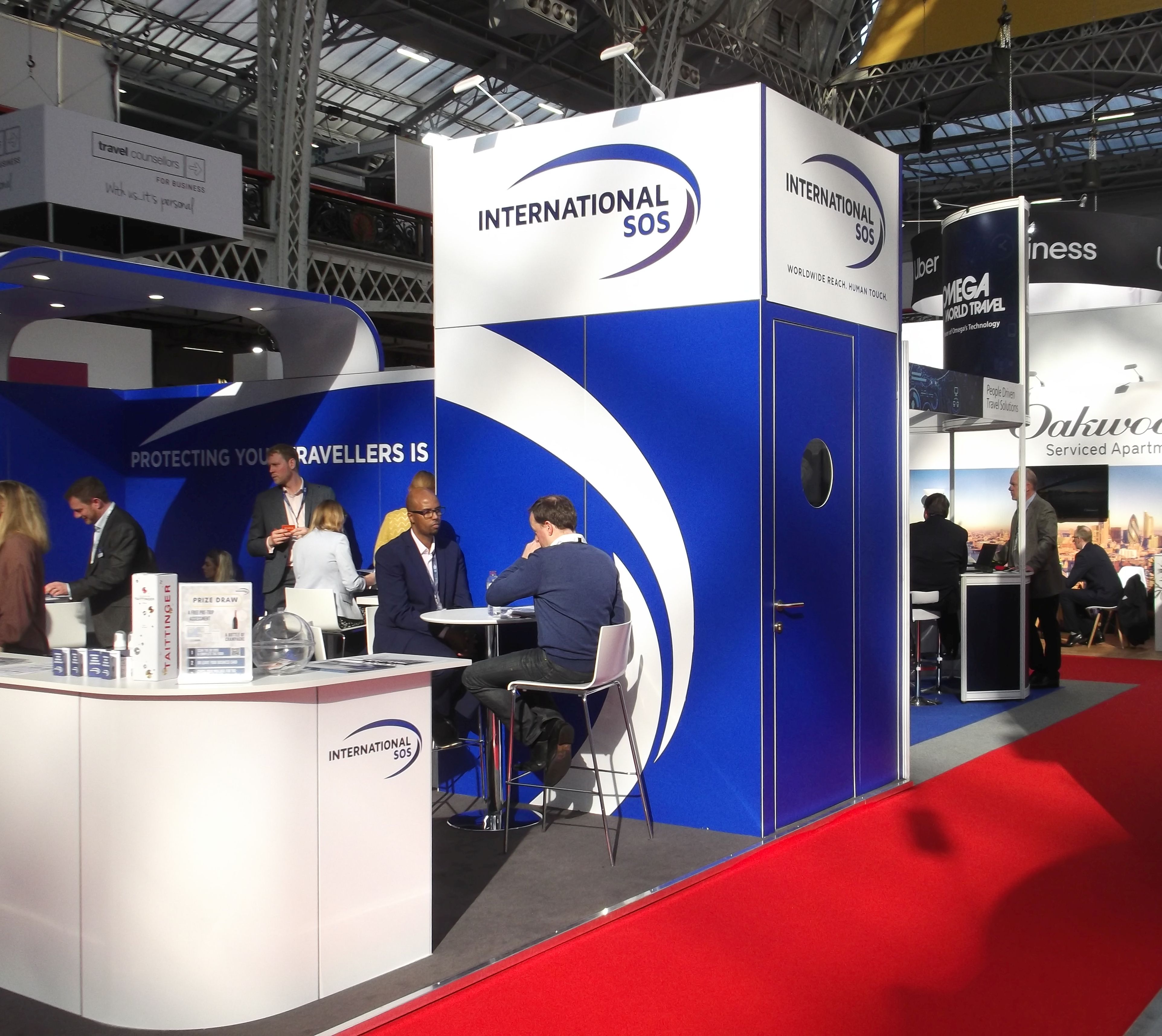 As for the welter of electronic aids, 14 exhibitors offered analytics, and a dozen expense management (the major card companies were there), while PredictX, MobileXpense and Chrome River were in both categories.   Also at Olympia was HeadBox predicting that artificial intelligence will transform the events industry by 2025.  Despite the app-fatigue mentioned last year, a few exhibitors were showcasing this means of saving time.

The only criticism of Business Travel Show is that, as usual, the numbering of stands was chaotic.  Again and again, visitors complain of getting lost.  Furthermore, none of those attending seemed happy about having to trek out to ExCel next February – hopefully only while Olympia, so convenient in central London, is being refurbished.

AND JUST IN CASE YOU COULD NOT FIND THE STAND AIR ASTANA POINTED THE WAY. 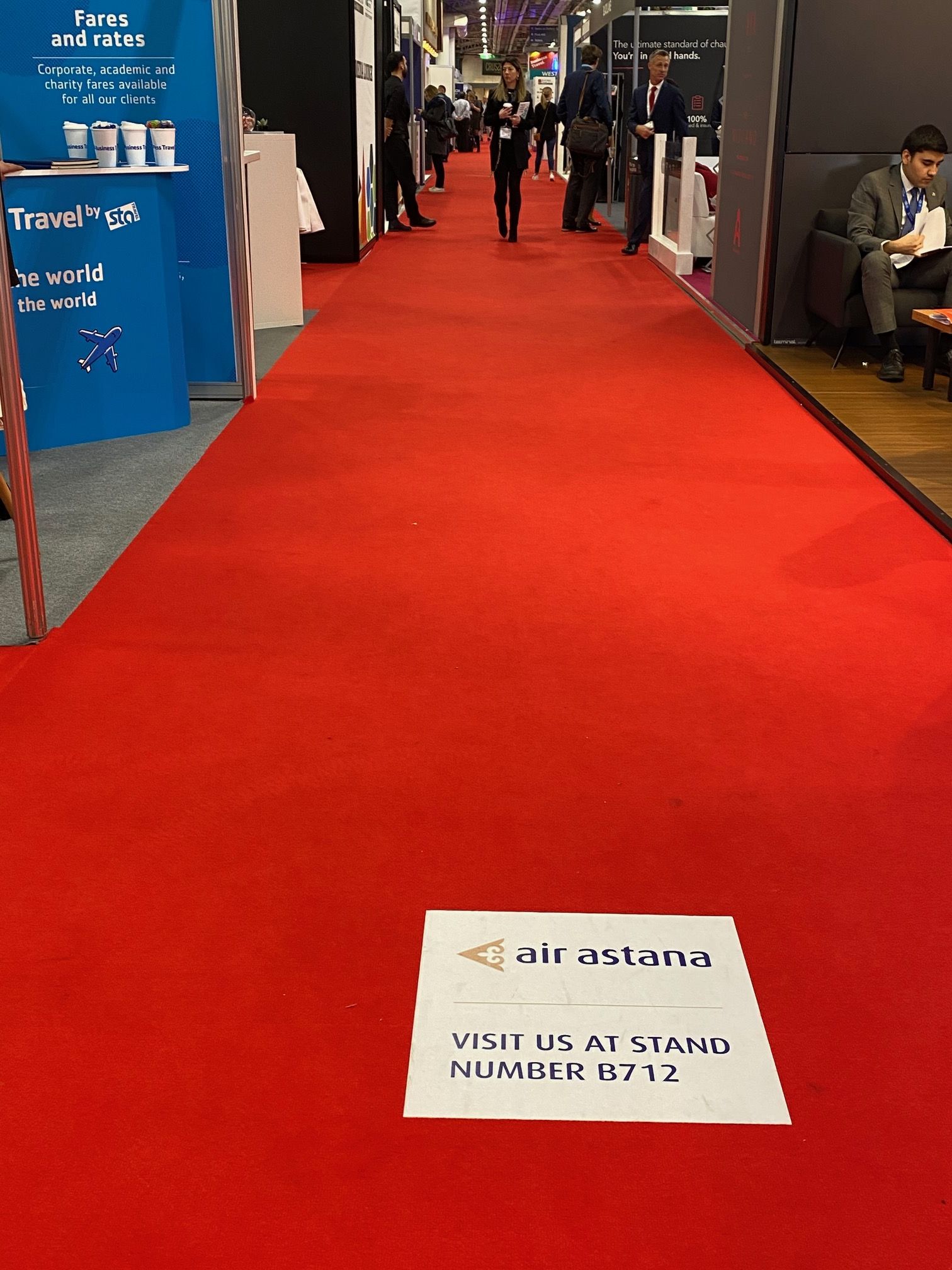