An historic statue of aviation pioneers John Alcock and Arthur Brown, who made the first non-stop transatlantic flight in June 1919, is being formally unveiled by Prince Michael of Kent today, Monday, at Brooklands Museum in Surrey. 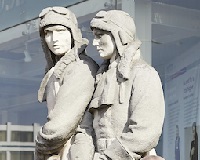 The sculpture was commissioned by the British government and put on display at Heathrow in 1954 to commemorate Alcock and Brown’s June 1919 flight. The statue has now been moved to its new location at Brooklands’ First and Fastest display.

The two aviators made the Atlantic crossing in a modified Vickers Vimy World War I bomber which was built at Brooklands. The First to the Fastest exhibition opened last year to celebrate the centenary of the journey.

The statue has moved before when it travelled from its home at the Heathrow Academy to Ireland ahead of celebrations there to mark the centenary (BTN 13 May 2019) before returning to London.

The frail-looking aircraft (below) which Alcock and Brown flew is in the Science Museum in London. A 1990s replica which flew the Atlantic in 2005 piloted by Steve Fossett and Mark Rebholz is now a major attraction at Brooklands. 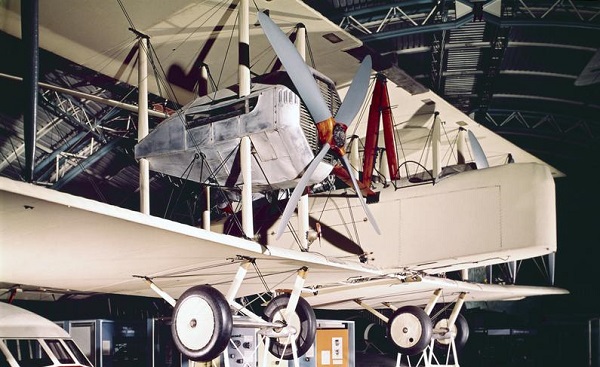 .... I was at the Science Museum, London on the very day, hour and minute alongside a German chap who also made the pilgrimage to the museum from Munich (Just The Two Of Us It Seemed To Be) to commemorate 100 years later at the exact time Alcock & Brown crash landed in a bog in Ireland after the first Transatlantic flight back in 1919. Reaching up and touching the aircraft at that very minute...it's hanging fairly low from the ceiling you see! Maybe a bit sad but who cares...and thinking about the number of times I've flown USA-LHR/LGW... ...if someone offered me a seat in this ? or the replica...would you do it ? or would you prefer just about fifty years later...the birth of the supersonic Concorde ? Man's ingenuity just gets faster and faster...literally! Paul, London, UK.