The flights will operate three times a week on Wednesdays, Fridays and Sundays and follow the launch in spring 2015 of Air Astana Boeing B757 services between Paris and the Kazakh capital Astana, now known as Nur-Sultan.

The Almaty flights will connect with domestic flights to Nur-Sultan and Shymkent, as well as offering international flight connections to Bishkek in Kyrgyzstan and Dushanbe in Tajikistan.

■ Air Astana has also announced it will put the A321 on its Nur-Sultan – Heathrow route from next March, replacing the Boeing B757. The airline has a total of seven of the narrow-body A321s due for delivery over the next three months.

The Airbus will have the same number of seats as the Boeing – 16 in Business Class and 150 in Economy – but the Business Class cabin (below) is due to get a new look.

Air Astana CEO Peter Foster has said Shanghai, Singapore, Prague, Mumbai and Jeddah or Medina are other potential routes for the A321LR. Bangkok, Hong Kong, Kuala Lumpur and Seoul have been confirmed. 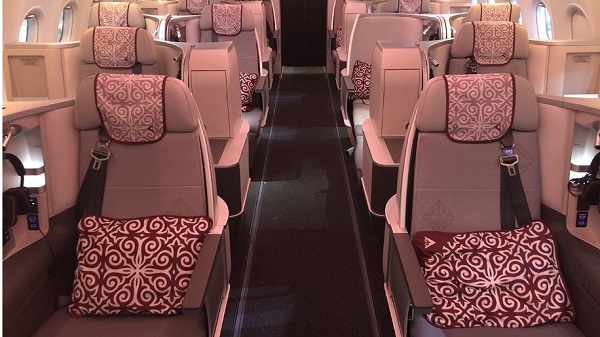